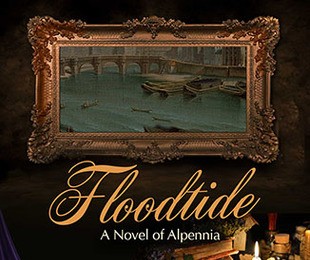 Rozild Pairmen is in trouble. After being outed for sleeping with another girl in the house staff, Roz is fired and thrown to the streets without a reference. Living homeless in Rotenek is not an option for a young girl, so Roz is lucky when she lands on the doorstep of Mefro Dominique, the local dressmaker. Dominique can’t just hand her a full-time apprenticeship, unfortunately, but Roz is gifted with the next best solution instead. Margerit Sovitre, the royal thaumaturgist (magician), will hire Roz to work in her home and she will also sponsor Roz to spend half her time apprenticing with Dominique.

Roz starts out in laundry service at Maisetra Sovitre’s home, working on mending and fine washing whenever she isn’t pursuing her passion, learning the art of dressmaking with Dominique and her daughter, Celeste. Later that year, Roz rises in the ranks of the house when she’s asked to help the Maisetra’s cousin Iulien dress every morning and evening, and she continues to work with Dominique and Celeste in the time in between.

Floodtide is told in the first person from Roz’s perspective and she’s a trustworthy, helpful guide for those who aren’t familiar with Rotenek. Of course, that’s by design, because Rotenek is a city in Alpennia, the fictional world where Heather Rose Jones’s other novels take place. While it’s not necessary to have read any of the other three books before reading Floodtide (I had only read the first one prior to picking up Floodtide and was never lost), readers who are familiar with them will be happy to see how some of their favorite characters are doing.

In addition to bringing a local’s perspective to Rotenek, the first-person narration works perfectly because Floodtide is Roz’s book, following her through a pivotal time in her life as she figures out who she is and who she wants to be. She knows she’s attracted to other girls and not at all to men, so having a career instead of planning to marry is a must. After losing her first job so traumatically, Roz is cautious with her attractions, ensuring she won’t risk her new chance at a good life. For example, though she becomes close to Celeste as they work together in the shop, she takes care not to think of Celeste romantically. Instead, Roz forges a strong friendship with the prickly girl, joining her as Celeste meets with the other charmwives in town and helping her as much as she’s able when Celeste is learning charms, which are like magic spells for things like healing injuries or getting stains out of clothing.

As Roz splits her time between Iulien, of whom she also grows very fond (though not romantically), and Dominique and Celeste, she knows she’ll be forced to make a choice one day: become a full-time maid to Iulien or become the dressmaker she’s always wanted to be. That choice comes to a head near the end when the lower parts of Rotenek become flooded, fever spreads through the city, and a charm Celeste has been tinkering with might be the city’s only hope. Having seen the scared, vulnerable girl Roz was at the beginning of Floodtide, it’s truly marvelous to see who she is by the time the flood comes, as she uses her cunning and connections to help save the city.

The worldbuilding in Floodtide is also excellent, bringing magic to early nineteenth-century Europe in a way that feels authentic. Titles and names have been created that are uniquely Alpennian, and the author has provided a helpful pronunciation guide at the beginning of the book for those who are interested in such things. Jones’s writing style is also so gorgeous, yet precise, that it’s impossible not to be spellbound by it.

Historical fantasy can be a tricky sell in lesbian fiction, especially since the readership often expects that all lesbian stories are romance. And while Roz is a lesbian and has the occasional crush, Floodtide is not a romance. If you’re at all interested in historical fiction, however, please do yourself a favor and pick up Floodtide, because it truly is a gem that’s worth exploring.

'Draw the Line' by Laurent Linn
'Tarry This Night' by Kristyn Dunnion
Rebecca Coffey: On Sigmund Freud's Relationship with His Lesbian Daughter Anna and Using Fiction to ...