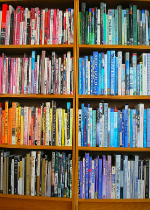 Samiya Bashir (she/her) is a poet, artist, writer, performer, educator, and advocate. A long-time communications professional focused on editorial, arts, and social justice movement building, Samiya was a founding organizer and longtime Board member of Fire & Ink, a nonprofit devoted to increasing the understanding, visibility, and awareness of the works of LGBTQ+ writers of African descent and heritage. Samiya is the author of three poetry collections, most recently Field Theories, winner of the 2018 Oregon Book Award’s Stafford/Hall Award for Poetry. Her first book, was published by Third World Press, the oldest independent publisher of Black literature. With Where the Apple Falls (LAMMY finalist 2005) she was among the first poets published by RedBone Press where publisher Lisa C. Moore has been dedicated to raising the voices of Black LGBTQ+ authors for 25 years. Samiya herself is also a two-time Lambda Literary Awards finalist. Samiya’s honors include the Rome Prize in Literature, the Pushcart Prize, Oregon’s Arts & Culture Council Individual Artist Fellowship in Literature, and two of the University of Michigan’s Hopwood Poetry Awards among numerous other awards, grants, fellowships, and residencies. In addition to her books, Samiya has served as editor to national magazines and anthologies of literature and artwork. Bashir lives in Harlem.

Monica Carter (she/her) is a writer, poet and reviewer. She was a PEN Center USA Emerging Voices Fellow, a Lambda Literary Foundation LGBT Emerging Voices Fellow and a fiction graduate of the prestigious PEN Center’s MARK program. Her fiction has appeared in literary journals including The Rattling Wall, Black Clock, Cactus Heart, Bloom and the anthology Strange Cargo. Her nonfiction has appeared in publications including Black Clock, World Literature Today and Foreword Reviews. She served as a judge for the Best Translated Book Award in poetry and fiction from 2008-2015. Monica currently manages Lambda Literary’s LGBTQ Writers in Schools. She is currently finishing her first novel.

L.D. Lewis (she/her) is an editor, publisher, and Shirley Jackson award-nominated writer of speculative fiction. She serves as a founding creator and Project Manager for the World Fantasy and Hugo Award-winning FIYAH Literary Magazine. Other hats include Founding Director of the Hugo-nominated FIYAHCON, Researcher for the (also award-winning) LeVar Burton Reads podcast, Chair of the 56th Annual Nebulas Conference, and concurrently, the Awards Manager for Lambda Literary. She is the author of A Ruin of Shadows as well as a number of pieces of lauded and long-listed short fiction and poetry. She lives in Atlanta with two cats, her coffee habit, and an impressive LEGO build collection.

Chloe Feffer (she/they) is an educator, poet, and writer based in Brooklyn, NY. Their poetry and fiction have appeared in or is forthcoming in The B’K, Sledgehammer Literary, Stone Fruit, FEED Literary Magazine, JADEN, and elsewhere. Prior to joining Lambda Literary, Chloe worked as an early childhood educator, as an educational program coordinator, and as a facilitator for memoir writing workshops with incarcerated women. She holds a BA from Stonybrook University and an MA in Education from CUNY Hunter.

Suzi F. Garcia is the author of the chapbook, A Homegrown Fairytale, Bone Bouquet 2020. She is a co-publisher at Noemi Press and a Poetry Editor for Haymarket Books. Suzi is a Macondonista, a CantoMundo fellow, and a Lambda Literary fellow. Her writing has been featured or is forthcoming from POETRY Magazine, The Offing, Vinyl, Fence Magazine, and more. She has presented at PCA/ACA, AWP, and Console-ing Passions, among other national conferences.
Find her on Twitter at @SuziG or at www.suzifgarcia.com.

Emmanuel Henderson (he/him) is a writer born and raised in Chicago, IL and Outreach Director for the Speculative Literature Foundation. You can find him blissfully unaware of certain trends, wondering whether he should have a second bagel, forgetting commas (mhm), or playing VALORANT.

Mai Tran is a genderqueer Vietnamese American writer and communications strategist based in New York. Their work has appeared in Apogee, Vox, i-D, The Rumpus, and elsewhere. They previously served as a nonﬁction coordinator for MFA App Review, increasing underrepresented writers’ access to fully-funded MFA programs, and as the Poetry Coalition Fellow for Lambda Literary.