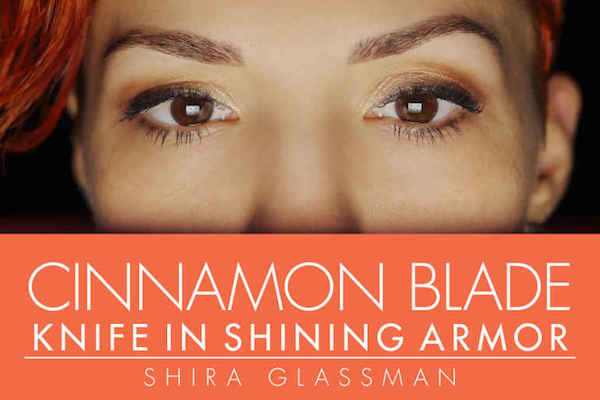 Last year, Shira Glassman released a lovely, fluffy romance between two women called Knit One, Girl Two. Reading it was like getting a warm hug and a delicious cupcake, making it a perfect choice for when you need to hide from a spectacularly bad day or our constantly terrible news cycles. In it, the two main characters gush over a TV show and one of them sends the other a link to a fanfiction story she particularly likes about it (because of course they love fanfic—they’re adorkable). Cinnamon Blade: Knife in Shining Armor is that fanfic.

Cinnamon Blade used to be an art thief, but she’s using her skills for good now as part of Captain Werewolf’s team. When she finds herself rescuing Soledad Castillo over and over again from various bad guys, Blade can’t seem to stop herself from falling head over heels for the attractive, nerdy woman.

Everything is coming up Cinnamon Blade when she asks out Soledad and learns that the attraction is entirely mutual. Not only is their chemistry off the charts, but they immediately burn up the sheets when they hit the bedroom. But can Blade get—and keep—the girl of her dreams when she has to keep dashing off to deal with spooky problems like vampires and aliens?

Cinnamon Blade: Knife in Shining Armor is pure fun, from beginning to end. Glassman does a fabulous job of immediately establishing who Blade and Soledad are, clueing us in to the fact that something has been building between them for a while. This works especially well with the story being a fake fanfic, because we can presume (or know, if you’ve read Knit One, Girl Two) that the buildup has already happened on the TV show, and the fic delivers the satisfying relationship payoff that the show never does, reflecting one of many functions that fanfic has always served. The beauty of this novella, compared to what often happens when you pick up a story from a fandom you’re not familiar with, is that Glassman makes sure we know everything we need to get maximum enjoyment. Even though it references events from the show, we’re never left scratching our heads as we try to figure out what’s going on, like when it opens with this:

When Cinnamon Blade finally asked Soledad Castillo out, it wasn’t just after she’d rescued her from Dr. Lethal. No, that evening ended with the grateful office worker deposited, breathless, into the arms of her friends, and Blade hovering just out of view as Captain Werewolf worked the cameras. Soledad, arms chafed from duct tape, was too upset for anything more than long, wistful glances at her auburn-haired heroine—but boy, did she deliver on those. She seemed unable to tear her eyes from Blade and when Blade smiled back, Soledad’s lips parted with vivid emotion.

And then when Blade winked, Soledad giggled slightly and looked down, only to return the gaze more boldly next time. Oh, yes.

At only 79 pages, Glassman manages to pack a lot of great things into Cinnamon Blade. Not only does it deliver an action-packed superhero story, it’s also a scorching erotic romance. These may not sound like two things that would work well together, especially since it’s not a graphic novel, but they actually work really well. Because Soledad and Blade already shared a bunch of long looks, sighs, and other signs of their chemistry in the TV show, they’re explosive when they admit their feelings for each other and take that leap from friendly acquaintances to girlfriends. Their scenes outside the bedroom are also a delight, with banter that’s sweet and silly, like when Blade finally asks Soledad out by saying “So, uh, I’m not looking for a man either. Whaddya say we not look for a man together? It’s a hard job, but I think we’re up for it.”

At less than two dollars, Cinnamon Blade delivers an excellent dollars-for-fun ratio. It’s also a fabulous choice for someone looking for more diversity in their romance featuring women who love other women, since Blade is Jewish and bisexual, and Soledad is Costa Rican and not sure whether she’s a lesbian or bi. If you’re looking for a quick, sexy, super fun read to get away from the world, you can’t go wrong with this one. I highly recommend it and can’t wait to see what Shira Glassman has in store for us next.

‘The Hope of Floating Has Carried Us This Far’ by Quintan Ana Wikswo
'We are the Ants’ by Shaun David Hutchinson
KG MacGregor: Love is All Around