The Year That Was: A Queer Literary 2019 in Review

The Year That Was: A Queer Literary 2019 in Review 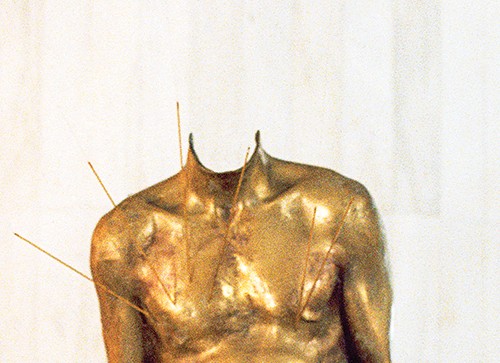 Without a doubt, 2019 has seen some stellar pieces of work from the LBGTQ literary community. This year, perhaps more than any other, the stories of queer and trans writers have not only illuminated the complexities within our community, but have also made it to the mainstream. So, before 2019 comes to an end, join us as we revisit some of Lambda Literary’s standout features, reviews, and interviews of the year. We hope you enjoy!

“Coming out” is a resonant theme that runs throughout the LGBTQ literary canon. This year, writer William E. Jones skillfully subverted the gay coming-of-age narrative with his novel I‘m Open to Anything.

Jones takes as his starting point the well-worn premise of the young gay man from a backwards town who moves to the big city, and then subverts every expected plot beat. After the narrator makes his much-anticipated move, he stays on the margins of his new home’s gay community. In centering non-normative experience, and bringing issues of class, race, and global politics to the forefront, the novel offers a fresh, socially conscious take on an over-told story that typically revolves around self-transformation.

British writer Bernadine Evaristo, became the first Black woman to win the Booker Prize for Fiction for her novel Girl, Woman, Other. In her review of Girl, Woman, Other, Daphne Sidor praises Evaristo for taking on “the weight of black female exceptionalism as one of its many subjects.” And what we found particularly intriguing about Evaristo’s work is her ability to seamlessly delve into the ever-evolving spectrum of Black queerness across the diaspora:

She populates every corner of Girl, Woman, Other with lively details collected from everywhere: 20th-century leftist movements in Ghana, black-market oil refining in Nigeria, the dating scene for mixed-race women in 1940s Newcastle, the early-morning routines of a supermarket manager. And when we finally meet the nonbinary social media personality who inspired Yazz’s spiel about the extinction of gender, they’re drawn with just as much idiosyncratic precision.

Speaking of the spectrum of queerness, we’d be remiss to not shine a light on Patrick Cowley’s posthumous release, Mechanical Fantasy Box: The Homoerotic Journal of Patrick Cowley. Crowley, whose life was cut short in 1982 due to AIDS complications, is a reminder of how far we’ve come as a community since the early days of the Gay Liberation Movement. Mechanical Fantasy Box serves as a time capsule of sorts, featuring 156 journal entries Patrick Cowley wrote in San Francisco and New York between August 1974 and October 1980.

In his review, Brett Josef Grubisic unpacks the unexpected influence Cowley’s diary entries have had on his life.

This year, we also had the honor of learning about the work of Foglifter, a San Francisco-based journal and press dedicated to filling the void in the literary landscape by prioritizing LGBTQ writers, with an emphasis on women writers and writers of color. Foglifter aims to uplift those who challenge and complicate the literary conversation, whether through subject matter, form, or technique.

Foglifter is a celebration of queer writing in all its cacophonous glory. Our issues aren’t themed, but we find that the pieces speak to each other in beautiful and surprising ways. We delight in the strange and transgressive, the tender and brutal—whatever queer identity and experience means to you. We want the pieces you’re afraid to let the straights read, what you hesitate to send out to mainstream journals. Foglifter is the place for that work, and for you!

Dig into more of our conversation with Foglifter here.

Life is a (LGBTQ) mystery! To drive the point home, Lambda Literary assembled a cadre of LGTBQ mystery writers to discuss the future of the genre.

Everyone should take an occasional break for love, and sometimes, the best way to do that is a swoon-worthy romance novel. Check out Tara Scott’s review of the “lushly written story of sapphic love,” The Lady’s Guide to Celestial Mechanic.

This is, as with so much of Pollack’s work, a magical story, which is to say that it is decidedly ambiguous and uncomfortable. It imagines a future in which transness is power, but asks what we might do with such power. It imagines a future in which the ‘trans narrative’ is once and for all transcended, but asks which might be lost, as well as gained, in such a transcendence. Poised between an embarrassingly limited past and a dangerously unlimited future, it leaves us, as we always have been, still balanced on the sharp edge of a knife.

2019 also saw the loss of two of the most beloved and gifted writers, Toni Morrison and Kevin Killian. In “The Author That Raised Me: Thoughts on the Passing of Toni Morrison,” Frederick McKindra expresses how Toni Morrison’s work “was difficult, always. It was also, simultaneously, so familiar; I recognized myself, a young black gay man, in it immediately.”

In this breathtaking elegy, McKindra shines a light on one of Morrison’s most underrated works, Sula, and shares a final, passionate message to the author who inspired him.

I want Toni Morrison to know how sturdy her inspiration has proven to be, even though I’ve come to know better the lasting consequences of a writer’s life, of doing language. I’m grateful to her for the way she constantly challenges me to confront my ideas about blackness, about black community, about disbelieving the myths projected onto black people, and sometimes the ones in which we imprison ourselves.

In her heartfelt tribute to the writer Kevin Killian, Diana Cage wrote:

Kevin Killian was a beloved poet, art star, prolific novelist, Amazon reviewer, and one of the founders of New Narrative movement, just to list a few of the millions of things he did, but listing his accomplishments can’t really explain who he was. He was unquantifiable. He was a genius, but in an unlike-most-geniuses way he was a warm, caring, and grounded human being whose generosity can’t be overstated. He made everyone around him feel special and seen. 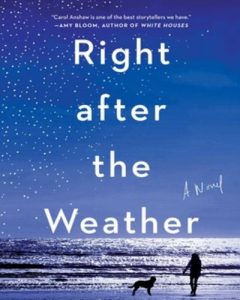 This fall, celebrated novelist Carol Anshaw released Right After the Weather,a book that captures a group of forty-year olds in a state of emotional free-fall.

Set in late 2016 through early 2017, Right after the Weather captures a world in midst of crisis. Politics play a role in the book, along the edges—these characters are upset about the recent election, they worry about the turns the world might take—they are aware that the easy lives they have long led are under threat.

But the novel isn’t about politics, not really. It is about the psychology of ordinary people who are put through extraordinary circumstances.

With one foot in historical fact and one foot beautifully in fiction, Christopher Castellini vividly reimagines one of the most fascinating partnerships of the gay literary world. The author has created a compelling narrative about the bonds of love and affection between two men: the playwright Tennessee Williams and his partner, the often overshadowed, Frank Merlo. Merlo, beloved by those closest to the celebrated Williams, still lived mostly in the playwright’s shadow. His own ambitions as an actor and dancer thwarted, Merlo functioned as William’s assistant, always getting the couple where they needed to be when they needed to be there. Leading Men is an accounting of Merlo’s time with Williams, a working-class man from New Jersey thrust onto the international stage of the mid-century’s jet set.

This year also saw the release of yet another incredible work by Carmen Maria Machado. In her new memoir, In the Dream House, Machado walks the reader through some of her own experiences in an emotionally and psychologically abusive relationship. She also explores society’s inability to grasp the fullness of intimate partner abuse in queer relationships, and the silence that comes with this loss:

In the Dream House argues that Machado’s reluctance to identify her abuser’s mental illness is part of a larger pattern of the queer community’s reluctance to talk about abusive relationships. Machado is intensely sensitive to the reasons for this: she explores not only the long history of heteropatriarchy’s inability to comprehend either love and sexuality between women, or women’s rage and violence–let alone all of that together. But in addition to that long history, Machado parses our contemporary reluctance to talk about abuse.

2019 has also been a phenomenal year for poets of color. In April, July Westhale was excited to review Franny Choi’s latest work, Soft Science, which she says “explores the intersections of identity, race, sexuality, and real/not-realness.”

Similarly, and in conjunction with the feminist messages of the film, Choi’s new book Soft Science explores the intersections of identity, race, sexuality, and real/not-realness. Throughout the collection, poems refereeing the Turing Test appear, reminding us and grounding us, the reader, in the reality of nonreality; this speaker is her own person, but she’s also a creation, made to be appealing, made to be whatever it is that is needed.

T Kira Madden’s Long Live the Tribe of Fatherless Girls is a grim, but hopeful memoir about a young woman who loves people who don’t deserve it–toxic friends, a hot-and-cold female lover, a creepy man who answers her pen pal ad in a teen magazine. Madden is in desperate need of connection […]

[….] Above all, hers is a story of addiction told from the point of view of someone who must make peace with the fallout, and in doing so, grow from girl to woman.

Last, but certainly not least on our list, is Real Queer America: LGBT Stories from Red States by Samantha Allen. In their review, D. Gilson details Allen’s journey across America with a fellow queer, Billy, in tow. The story follows Samantha Allen, a trans woman who leaves Houston and returns to Utah where she “sees firsthand how queers in such places literally change the landscape.”

The story itself even offers a useful message for many of us who may be traveling to conservative spaces this holiday season.

What does it mean to stay put? Or, as a progressive LGBTQ person like Allen or me, to willingly return to a red place? It means that the very walls built by a thousand outside forces to distinguish between red and blue, straight and queer, regressive and progressive, are torn down by our very presence.

Featured image via  I‘m Open to Anything