Samuel Delany on the Books That Showed Him the World

Samuel Delany on the Books That Showed Him the World 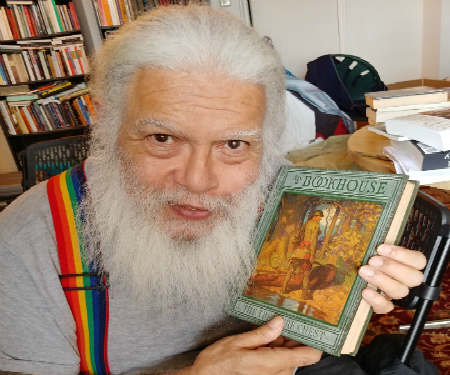 How do young, creative people dream of becoming writers? By reading. By supporting Lambda Literary you make sure that readers will always have access to LGBTQ books and LGBTQ writers. Please donate today so Lambda Literary can continue this important work.
We recently asked a group of writers what literature meant to them when they were young. Samuel (Chip) Delany told us about how books helped him understand the world.

Here is what Samuel told us about his first and most impactful set of books:

When I was a child, by far the most influential books in my life were the My Book House set of books, edited by Olive Beaupré Miller. Published in the ’30s, they showed pictures of Greece with full-frontal male nudity, which I was very impressed with, and they had pictures of traveling Mummers’ cards that the boy Shakespeare may have seen in Stratford-upon-Avon. They included fiction and poetry and biographies of writers and historical characters (like Anatole France and Dick Wittington [“thrice lord mayor of London”]), as well as illustrated accounts of Faust part one and two, and also fairy tales from Hans Christian Anderson and Grimm, and an account of Maggie Tulliver and her brother’s going to live with the gypsies from Eliot’s The Mill on the Floss.

They belonged originally to my cousin Barbara; when I was five or six, I received a full set, some grey, some maroon. They had ancient history and modern stories by O. Henry. [Those books] are probably why I am a writer. I think they should be the basis of any young person’s library, and when I had to return them to my cousin Barbara, to give to her daughter, I replaced them so my daughter would have them.

After I lost a good percentage of my library a couple of years ago, they were the first books I replaced. Holding one of the books up close, I remember they even smell the way a real book is supposed to smell. I don’t remember who the writer was who said, “Books do furnish a room”—probably Anthony Powell—but they are among the first books I got to refurnish my own home here in Philadelphia.

Stories shape who we are and how we see ourselves and the world. That is why it is important to cultivate LGBTQ narratives.

Help us keep sharing and expanding the world of literature by donating today!

Samuel Delaney has published over 40 books in a wide variety of genres, including science fiction, memoir, and comics. He has won four Nebula Awards, two Hugo Awards and special honors from Lambda Literary.

New In December: Elisha Lim, Justin Chin, Eve Kosofsky Sedgwick and Belasco
Roxane Gay on the Black Lives Matter Movement, Mike Albo and Brontez Purnell in Conversation, and Mo...
Read This! An Excerpt from Nepantla: An Anthology Dedicated to Queer Poets of Color