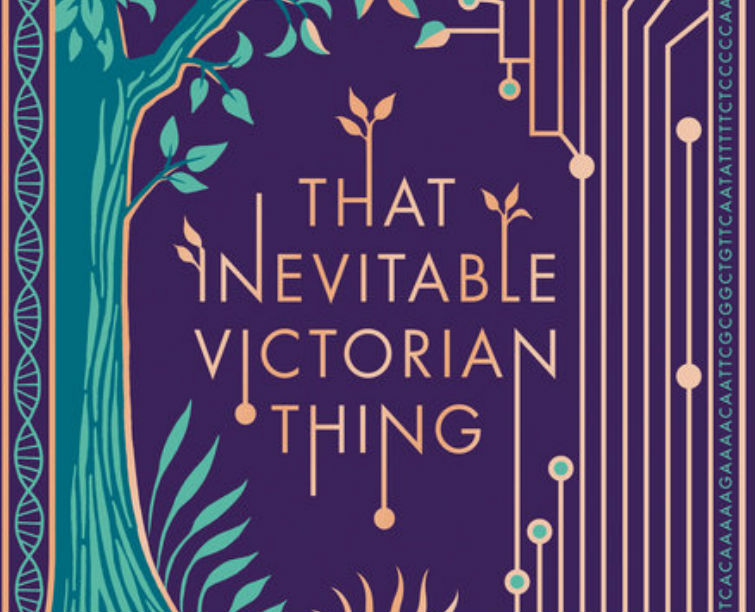 In E.K. Johnston’s new novel, That Inevitable Victorian Thing, world history doesn’t look the way we know it to today. There are some similarities, of course—as there are in all good speculative fiction—but it is the differences, the minor yet major tweaks, that define this new world. The biggest, from which the plot of this intriguing novel stems, is that Britain remained a super-power at the behest, and remarkably prescient forethought, of Queen Victoria I. This visionary new world is multicultural in a particular way: marriage matches are (most often) made by the omniscient Computer, transcending race and culture to pair couples by their genetic codes in an attempt to breed a stronger, more thoughtful empire. This situation has resulted in the kind of open and accepting society many people dream of. Biology (with love playing a somewhat more mysterious role) reigns supreme, resulting in a strong, united queendom (because, unlikely though it may seem to present-day readers sludging through the stew of misogyny, the monarchy hands down power via the first-born child, regardless of gender).

In this near-future world, Victoria-Margaret, a teenage girl and direct descendant of Queen Victoria I, is set to inherit the throne. But before she does, her parents have decided to give her one summer of freedom. Off she goes, “disguised” as Margaret of Sandwich, to Toronto, to stay with family friends and experience her “debut”: a teenage rite of passage, which, as in times past, signals a girl’s entrance into the marriage market, but not as in time’s past, is something all genders do. Margaret’s friend, Elizabeth, daughter of the Fleet Admiral of the Royal Canadian Navy, is in on the secret, and the two, though never particularly close up to this point, form a quick bond. On the night of their debut, Margaret and Elizabeth meet Helena Marcus, the daughter of one of the empire’s top geneticist. Helena has come down from New London by unexpected invitation, to debut in Toronto. Practical Helena, who from her childhood has expected to marry August Callaghan, a heir to a shipping conglomerate, accepts the invite out of duty, but upon meeting Margaret, very quickly begins to enjoy herself.

That Inevitable Victorian Thing takes a bit of time to catch—the first few chapters are focused on the large cast of (mostly female) characters and distinguishing between them can take some effort. The Computer’s dominance also requires getting used to: the fact that it borders on arranged marriage and begs questions of piety and fealty is softened by citizens’ acceptance and embrace of the system and offset by the occasional anecdote of marriages that blissfully exist outside of Computer influence. Quibbles aside, once this new world is adjusted to, the plot moves along at a nice pace. The Toronto and Canadian woods of the future are well rendered, and the open society is beguiling—citizens of this empire appear happy, well-adjusted, compliant. Perhaps this is because the book focuses mainly on the upper class and those that work for them. Or perhaps—and it seems entirely possible given the promise of the world Johnston has created—this is because everyone is, actually, content.

As the novel progresses, and Margaret and Helena’s friendship hurtles toward the inevitability of something more, That Inevitable Victorian Thing picks up a lot of steam. In parts, it carries some of the bright sweetness of Sarah Waters’ early books, and the deft manner in which it deals with its protagonists’ sexualities and gender identities is refreshing. Margaret, despite her remarkably privileged upbringing, remains grounded and level-headed throughout the confusion and trials of her summer “vacation,” and Helena, thrown off kilter by unexpected news about her identity, bears her own and others’ secrets with unending grace. Towards the last third of the novel, the plot twists can feel forced, and the main conflict resolves itself a bit quickly with a somewhat naïve pact—but it’s hard to object to young characters exhibiting intelligence, patience, and resilience, especially when their actions conclude with happiness and the continued well-being of the empire.

That Inevitable Victorian Thing is billed as a young adult book, but as is often the case with this category, older readers will also enjoy this inventive royal coming-of-age fairy tale.