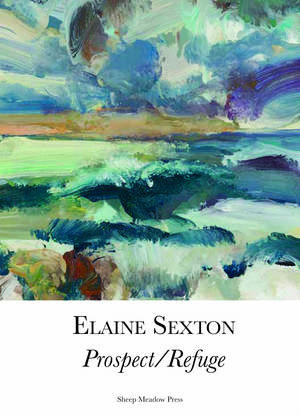 Prospect/Refuge (The Sheep Meadow Press), the third collection of poetry by Elaine Sexton, opens with an assertion that establishes the cool, assessing tone characterizing even its most intimate moments: “I did not choose you/chose me. And only/occasionally.”

This poem, “Sometimes Muse,” also establishes the tension that lives like a low flame throughout the collection, and the reader is held between love and something that could flare up into the opposite of love; clarity, not hate: “Today you come/in a perfect container,/shell of a walnut…”

Whether this particular poem is about creative inspiration, or whether the muse is a metaphor for an “other” that appears throughout the book is not the point; the beauty of the poems in Prospect/Refuge is how they evolve: From the blur of longing to a sharpened view of the subject of longing — without diminishing its appeal.

There are hints in Prospect/Refuge that the price of clarity means losing the cushion of delusion, as in “Only Sky”: “…because beauty is likely to burn up/the minute you turn your back/You know life is long/a friend once offered./A perfect lie…”

Those moments wipe the slate of expectation clean with their unexpected imagery and give optimal impact to longing in all its forms, including homesickness, as in “Drive”: “I left the ocean/I left the trees/I left Eel Pond with seabirds/standing on spring ice … I left my family of origin,/my buried Lucky in the back/yard, dog heaven,/now home to a chalet/built by strangers,/the chicken coop,/the barn, gone…”

Chapter II has only one poem, “About You,” and it opens, “There are so many of you:/the lover you, the “ex” lover/you—you, the best friend, you,/the neighbor, the analyst,/driver, co-worker …”

As often happens in this collection, this poem’s pointed wandering converges in a way that tempers its sense of struggle: “…the you who appears/in every poem I ever wrote/or ever will write, the one I love,/am devoted to, the you who needs no/introduction—that’s you—just you.”

To use the phrase “dog heaven” in a poem and not tint it with the least shade of sentimentality is a testament to Sexton’s judgment as a writer. In “Oh Well” she admits: “Even now/I think of her/two years dead,/paint brush in hand/at the beach/or in bed/with nothing on…,” and lest she romanticize even a deceased loved one, starts that poem, “A streak of white/fell like wet paint/and landed on the back/of her head,/her shoulder,/and slid down her back—/something a gull/exhaled and left/before landing/on a piling,” closing with humor: “Shit—a halo of excrement.”

Longing becomes more universal in Prospect/Refuge, as it encompasses the desire to be safe in both public and private ways. The speaker in “I Wish You Were” places the reader in New York City, where police helicopters are a vigilant given, and the body’s vulnerability is another constant: “The city/as target,/the city/as/launch pad/now/lies on its back,/eyes up…”

A dog appears like a palette cleanser throughout Prospect/Refuge, giving us a chance to see images from the canine point of view, even while poking fun at that human tendency to enhance an animal’s perception with our own, as in “The City”: “More sensations than/she could have imagined,/living a life she would have thought grim/compared to seaside phragmites, pine/trees, and sky. She tells me this/knocking her tail against a streetlamp/licking her lips.” Likewise, in “Let’s,” the dog “likes old movies/in black & white” — despite being deaf–and in that spirit of embracing a positive outcome, the poem ends, “…Love./‘Why be afraid of it?’”

As it turns out, though, the poems in Prospect/Refuge give us plenty of reasons to be afraid of it, and to embrace it nonetheless. In “How to Understand Everything,” we are let in on wisdom learned the hard way; and possibly the only way: “…Sound/makes more sense/than sight. That’s why/when someone really wants to/let you know/they say: I hear you.”

That well-earned voice of reason hits its stride in “The Woman at my Back.” Sexton writes: “My shoulders ache/under the weight of a thing/no longer here, you/getting smaller and smaller,/like a made-up lover/who doesn’t know how to drive,/who keeps making wrong turns,/trusting flawed instincts/to love this one,/that one,/me.”

Admitting we are part of a series in another person’s life is the kind of raw truth that resonates throughout Prospect/Refuge, but it was Sexton’s prose poem “Stick” that proved to be the most haunting for me personally; a bright moon woke me one night and images from that poem kept me awake longer than I wanted. In “Stick,” the dog appears as “sole witness” in a memory triggered, for the speaker, by shucking corn with friends: “On the couch, I sit stroking the silky, slender strands of a memory, a heat wave, shucking corn on a rock; or by a house somewhere else, so hot we peeled off our shirts, and stayed, half dressed, shucking, talking, the moon a trail in the dark.” The speaker goes on to integrate the emotions of that poem into her worldview: “The life of a dog is full of anticipation and disappointment. So too, our own. But sometimes between sips, between fields, something. Something.”

Prospect/Refuge ends with a prose poem, “Poetry & Smoke: A Manifesto,” in which Sexton proposes her theology of poetry, one with which Prospect/Refuge is clearly aligned. “I’m for a poetry that sets out to make something clear, something visually, sonically, spatially pleasing. Not opaque. Not obscure. Not overly sensual, either,” she writes. The dog makes a final appearance in that last piece, providing the ubiquitous barking of the world, and once it stops, “…you can practically taste silence in the wake of his bark, a new taste, one you never tasted before,” Sexton writes. It’s that taste, or the possibility of that taste, that makes longing, memory, and the wreckage of love worthwhile, and gives Prospect/Refuge its reason for being, and being read.

'What The Right Hand Knows' by Tom Healy
'The Fan Who Knew Too Much: Aretha Franklin, the Rise of the Soap Opera, Children of the Gospel Chur...
'Tell Me Again How a Crush Should Feel' by Sara Farizan