1. What made you want to dedicate Awakened, the latest book in your bestselling House of Night series, to LGBT teens?

As I was finishing Awakened I began hearing the news about the wave of gay kids committing suicide, and it broke my heart.

Also, in Awakened tragic events drastically affect one of my favorite fictional couples—Damien and Jack. Those things added up, and I knew I needed to speak specifically to my LGBT readers and reach out to them with love and hope. Kristin and I decided dedicating this book to our LGBT readers would be one little thing we could do to, perhaps, make a difference.

2. You were a high school teacher before becoming a full-time writer. Did you ever witness any bullying—specifically LGBT bullying—in the classroom? 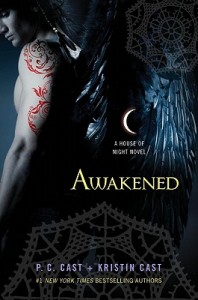 I was, indeed, a high school teacher for fifteen years, and the first thing I want you to know is that I had a zero tolerance to bullying policy in my classroom. I consistently tried to instill within my students the understanding that just because someone was different, that didn’t make them less than or evil or wrong.

Yes, I’m sure there was bullying still going on, but I can tell you that during the last five years or so I definitely noticed a shift in it. Gay kids, specifically gay boys who were out, were much better accepted. I think a lot of that acceptance had to do with a change in the general public’s perception of gays, which seems to correlate to positive role models in books, movies, and the media in general.

I also saw that girls—really popular girls—discovered how awesome it could be to have a gay BFF, and because of their open acceptance many of the meathead mentality boys realized that’s it’s not cool to mess with/bully your girlfriend’s gay BFF!

3. You write some of my favorite gay teen characters. When you started the “House of Night” series, what made you want to include gay characters in your novels for teens?

Excellent question!  From the very beginning I wanted to keep the HoN real.  Even though the setting was paranormal, I wanted my teenage characters to reflect the real world.  I knew I’d get hassled for having my kids speak, think, and act like actual high school kids. (I get lots of mail about their language—and all I can say to the complainers is: “If my characters’ language offends you, don’t ever walk down the hall of a high school during passing period! And, of course, the complainers fail to “get” that Zoey, my heroine, is a non-curser—but that’s a different topic!)

So I added gay kids because it’s real. Actually, Damien is based on the student who helped me research Nyx for the HoN. I told John I was going to base one of the characters on him, and let him choose whether “he” was going to be a vampyre, fledgling, or human.

He chose fledgling, and then he also chose his fictional name—Damien. Jack is also based on another of my students (no, he and John aren’t dating—they’re just friends).  The real kid Jack is based on is the first recipient of the Cast Education Foundation’s Scholarship; he’s currently a student at The University of Oklahoma, and doing very well (all A’s for his first semester except for one B in Chinese!).

4. In Awakened, there’s a line when one of your characters says, “…what if all the good folks leave and evil gets bored playing all by itself and goes home, too?”  How important do you think it is to stand up to things like bullying?

I don’t think you can overestimate the importance of standing up for what’s right, especially for young people. When a kid develops the ability to step away from the herd and say, “Hey, you can’t pick on him/her!  That’s not right!” you see a young person who is maturing from child to adult.

Kristin made a comment in one of our recent interviews that explained this well.  She said that when a teenager stands up for another kid it shows that she has attained a healthy level of self-confidence, and that she’s willing to take the chance that she’ll be shunned by the general populace because she understands that being a good human being is more important than being perceived as popular.

I think she’s absolutely right.  Grown-ups who are decent human beings stand up for what is right.  Petulant, selfish children do not, whether they’re fifteen or fifty.

5. Some pretty tragic things happen to your gay characters.  But your stories are still all about hope, light, and love.  Would you say that it really does get better?

Absolutely!  What I wish LGBT kids would understand is that high school and even college is about learning and growing—and for some people their maturity level stagnates there.  As we grow up we get to choose the people who surround us, so in our personal lives we can reject those people who haven’t matured enough to embrace diversity.

After we finish school we can create harmony and peace and happiness of our own making—in our own worlds.  It gets better because we have the ability to make it better.  Each of us has that ability.  Don’t give up!

Photo: Courtesy of the author

Brent Taylor is a teen in Kentucky. He blogs at naughtybookkitties.blogspot.com and interns in children's publishing.