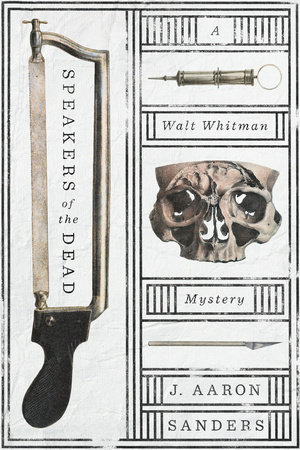 It’s 1843, and Walt Whitman, who’s in his early twenties, is not yet the “American Poet” and author of Leaves of Grass. His most notable work to date is the unabashedly sentimental temperance novel Franklin Evans, which he would later reject as “rot.” Speakers of the Dead, J. Aaron Sanders’ debut novel, traces the beginnings of Whitman’s evolution into the father of free verse by way of a mystery story.

As Sanders mentions in his notes, Speakers is first and foremost a mystery novel. It opens with the hasty execution of Lena Stowe, Whitman’s friend and medical pioneer, who is accused of murdering her husband, Abraham Stowe. Abraham, who with Lena founded the Women’s Medical College of Manhattan, has also been charged with a crime—the manslaughter of Mary Rogers, the cigar girl who inspired Edgar Allan Poe’s “The Mystery of Marie Rogêt.” He has been accused of having an affair with her and botching the abortion that led to her death. Lena is thought to have murdered her husband out of vengeance for his indiscretions. It becomes clear, though, that little is what it seems, and that resurrection men—body snatchers who sell human remains to medical schools—may be involved in the crimes. One man in particular, Samuel Clement, may be the link between the dangerous underground world of resurrection men and the murders of Whitman’s friends.

Woven through this complex and fast-paced tale is a romance: Whitman and his estranged boyfriend Henry Saunders rekindle their relationship as they become more involved in uncovering the truth behind the murders. This tender, if a bit tame, relationship adds an important, humanizing layer to Whitman’s character, particularly as a young man beginning to understand his sexuality. As the story progresses, Whitman’s love for Henry grows and with it his intellectual maturity, especially as he rejects his earlier commercially appealing novels and begins to address the world with greater openness. As of yet, Whitman’s bold, sweeping humanistic voice hasn’t fully emerged, despite hints here and there of the writer he’ll become. Sanders has room in subsequent novels—if this is to be the first in a series (which I hope it is!)—to show how Whitman finds his voice, and perhaps, as he does, he can also find his body. Twice women attempt to seduce Whitman, and despite the failure of their efforts, these moments are afforded greater detail than much of the physical intimacy between Henry and Whitman. In future installments, I hope Sanders allows Whitman a more robust expression of his sexuality and imagery that suggests physicality of his developing poetic voice.

That being said, the corporality of the dead—from medical laboratories to plundered graves—does come through in gorgeous and emotional detail. In response to a collection of human specimens, Whitman “feels pulled by their odd beauty, their untranslatable state, and he is overcome with the sense of his own decomposition, his flung likeness, coaxed to vapor and dusk.” In passages like this, you get a glimpse of the Whitman to come—and a sense of Sanders as an exceptionally skillful and poetic writer. I wish, though, that this same richness detail were applied more broadly, that the novel was more suffused with imagery from mid-19th Century New York. Plot here is king, and perhaps, that’s as it should be. After all, this is a mystery novel, and its aim is to race breathlessly to its conclusion, which it does—but as I read, I wanted to stop more often and linger of the hem of beautiful dress or smell the soot in the air or feel the grime under the soles of my shoes. It would’ve helped me feel the story even more deeply.