‘The Song in My Heart’ by Tracey Richardson

‘The Song in My Heart’ by Tracey Richardson 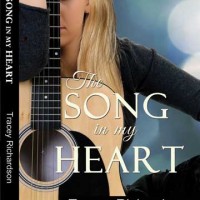 Dess Hampton once rode a wave of popularity and talent to become one of the biggest music stars in the country, but life is very different for her now. She has family and friends, she has money and beautiful homes in which to live, and she has her faithful chocolate Labrador retriever, Maggie, for company. What she no longer has is her voice, nor a career. A victim to the cure for the cancer she was diagnosed with six years earlier, radiation treatment took her voice in exchange for her life. As The Song in My Heart opens, Dess is content to live a reclusive life, keeping herself healthy and maintaining supportive relationships with family and friends. However, when a phone call comes from drummer extraordinaire Sloane Somers, inviting her to join young up-and-coming singer Erika Alvarez on the summer music circuit, Dess is both hurt and angered by her friend’s request. Dess accuses Sloane of thinking only of herself, refusing to understand her circumstances. But Sloane has another motive altogether. She thinks Dess should come out of seclusion and learn to find new meaning in music and life. Sloane doesn’t count on another effect when Dess finally meets the amazing young singer with the fantastic voice: attraction.

As a guitar accompanist, Dess reluctantly joins the tour, albeit in disguise and under an assumed name. She’s also acting as Erika’s guide through the treacherous waters of the music business; that way, her youthful, cocky attitude doesn’t get her into trouble. For her part, Erika is loath to admit that she’s more swagger than sting.

Erika soon discovers that the thick walls Dess has put in place to keep people out might be a hindrance to their work together, so Erika vows to break through those walls. In the process, she finds a beautiful, sensitive woman hiding behind there. Dess, for her part, rides a proverbial roller coaster, wanting to allow Erika in, but unable to extend the invitation and let the inevitable, growing attraction blossom.

As the trio sets out for the music festivals that will help Erika make her mark on the music world, Dess continues to hide beneath her disguise, becoming fodder for questions and speculation. But the jig is up when an unfortunate incident exposes Dess’ identity and sends her former girlfriend and evil manager, Dayna Williams, to Dess’ door with a mouthful of demands and a bucket of intimidations that threaten to strip Dess of everything she holds dear, including her new relationship with Erika. Because of it, Dess finds herself forced to make a choice that escalates Erika’s rise to stardom, but that is also the death knell of their relationship.

This story penetrates deeper than the surface tale of the music scene. It plunges into the depths of the human psyche to reach the place where scars are buried within life’s trauma. Tracey Richardson has drawn the main characters as two very different people, both in chronological age and life experience. One might say that Erika is on her way up, while Dess has already reached the depths, but during this tale, Erika is the one who plummets about as low as she’s willing to go, until she realizes that she’s the only one who can pull herself back up. Once again, Richardson brings the story around to something beyond the superficial.

Supporting roles played by the wild and passionate drummer Sloane and Dess’ sympathetic yet challenging older sister Carol give the story depth and spirit that otherwise would be missing. Finally, the supporting role of Maggie, the Lab, adds an ever-present balance and support in Dess’ life.

The Song in My Heart is about finding passion in life. It’s about relationships and how what we may think we want isn’t always what’s best for us. It’s a story with meat on its bones and the best kind of song in its heart.