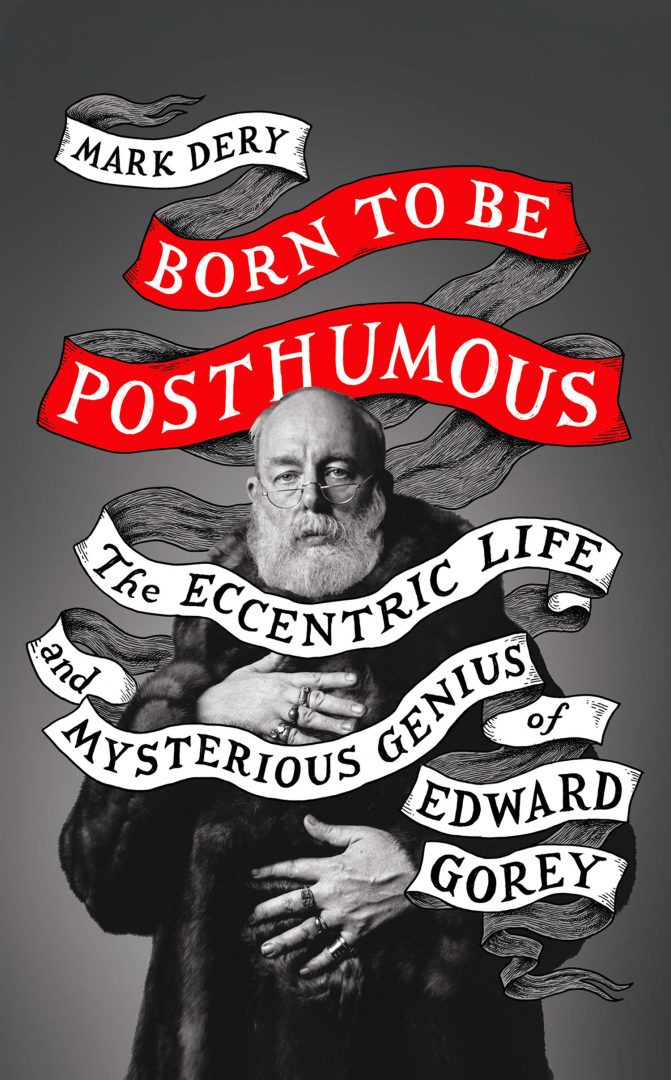 ‘Born to Be Posthumous: The Eccentric Life and Mysterious Genius of Edward Gorey’ by Mark Dery

‘Born to Be Posthumous: The Eccentric Life and Mysterious Genius of Edward Gorey’ by Mark Dery 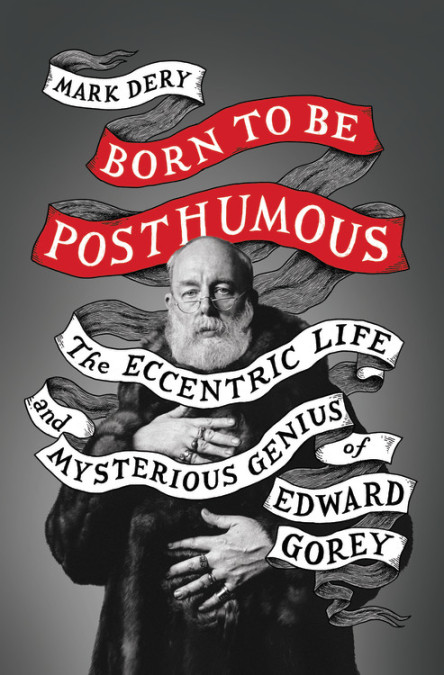 What an inviting cabinet of curiosities we have in Mark Dery’s Born to Be Posthumous: The Eccentric Life and Mysterious Genius of Edward Gorey! Every chapter is a revelation–each its own self-contained diorama that adds dimension to the whole. Even the unanswered questions are displayed in such a way that the reader marvels, as if peering beyond the dark, autumnal borders of a Gorey drawing to ponder even more ineffable shadows. Edward Gorey (February 22, 1925 – April 15, 2000) fans will absolutely revel in this book, for in the biographer Dery we find a playful yet knowing kindred spirit. There are two types of biographers: those who have a point to prove and those on the path to discovery; Dery belongs to that latter group, which makes Born to Be Posthumous a Borgesian journey, replete with exquisite maps and buried treasure. The maps are Gorey’s books; the previously obscured treasure his sexuality, at long last discussed with great aplomb.

The young Gorey was an august bibliophile, granting him a literary depth that prepared him for Harvard and an artistic life as a young adult scratching out a living as an illustrator in New York City. He was born in Chicago, where his father was a newspaperman reporting on the era’s gratuitous crime, of which the city’s streets amply supplied. Crime and murder long fascinated Gorey, culminating in his first publically recognized phantasmagorical masterpiece, The Gashlycrumb Tinies, an abecedary displaying the whimsical deaths of children. As a boy, he also read Agatha Christie mysteries (becoming an enduring anglophile who never traveled to England) and haunted the Art Institute, where Grant Wood’s iconic American Gothic is housed (you can feel how his own work constantly mocks such wholesomeness), and where he discovered the liberating influence of surrealism. In high school Gorey befriended Joan Mitchell, who as an adult became the noted abstract expressionist (a form he despised), beginning a social circle of creatives that he would replicate every time he moved on. Dery details his education and upbringing in a way that collects the clues that are then rediscovered in the books Gorey wrote and illustrated later in life. The emphasis on his writing and literary influences in Born to Be Posthumous is significant, as Gorey self-identified primarily as a writer. The startling simplicity of his text, surreal or nonsensical, can allow his captivating artwork to dominate–making Dery’s dexterous unpacking of Gorey’s prose as well as his images revelatory.

Military service put him in the position to begin a correspondence with a fellow music lover, letter writing becoming an important mode of self-expression for the reclusive Gorey. At Harvard his queer sensibilities emerged in friendships (he roomed with gay poet Frank O’Hara!), cliques, and artistic self-expression. This persona coalesced in New York City. He found his footing as an illustrator and devotee of Balanchine. The ballet became a major influence as well as providing a social succor–his attendance obsessive. Ensconced in a fur coat and scruffy sneakers, dripping with rings and a Whitmanesque beard, he cut a figure that was in some way an invert’s radiant shield: unknowable, unapproachable. Though he used his free time in the office to develop his own mini-masterpieces, Dery takes us on a tour of Gorey’s commercial work. In particular, his cover for Herman Melville’s Redburn from Anchor Books, “a novel famous for its rampant homoeroticism, (Gorey’s illustration) is so winkingly gay it teeters on the brink of self-parody.” The legendary Gotham Book Mart, now gone along with so many other bookstores which used to knot Manhattan, published his work and held shows, helping to burnish his growing reputation.

Asexual, aromantic, or super-humanly discrete, as the burgeoning gay eroticism of the 70s exploded, literally spilling into the streets with breakneck cruising, nude sunbathing on the piers, sex in the trucks, Gorey remained a solitary figure, active only in art. Dery resurrects 1975’s queer lost classic, The Story of Harold, which Gorey illustrated, and picks out the subtle details wherein Gorey subverts the text by drawing the more innocent passages and laces them with priapic images. The 70s also brought a revival of Dracula to the New York stage, with Gorey designing the sets to great acclaim. This success financially enriched Gorey while bringing him a greater audience. But as his artistic career gained momentum, he was coy in interviews about his sexuality. After providing a life time of examples of crushes on usually unattainable men, Dery digs deeper:

[….] In the Solod interview, as reproduced in Ascending Peculiarity: Edward Gorey on Edward Gorey, he responds to a pointed question, “What are your sexual preferences?” with the legendary dodge, “Well, I’m neither one thing nor the other particularly.” But in the original, unexpurgated version of the article . . . he adds, “I suppose I’m gay. But I don’t really identify with it much.”

So there we have it. Though with Gorey, as in life, there’s always an added pinch of ambiguity. Perhaps he was like Melville’s Bartleby, and simply preferred not to.

Gorey took that Dracula money and moved to Cape Cod and bought a ramshackle house where he gorged himself on bad television. The house and all its odd collections was documented by photographer Kevin McDermott in Cape Cod Existence with Elephant House: or, The Home of Edward Gorey. On the Cape, Gorey practiced his experimental wit with a local theater troupe. Gone were the rings and fur coats as he settled into small town life. By the time Gorey passed away, his wondrous world of vaguely-Victorian creatures and urns, solemn landscapes and endangered children had become part of the American cultural landscape; his Cape Cod home now a museum dedicated to his artwork.

With Born to Be Posthumous, Mark Dery pulls back the grand drape in a way that does not dispel the magic but simply sanctifies Gorey’s contribution. Though he stood apart, or was sequestered away with his cats in the studio, we can now proudly confirm that Edward Gorey is most definitively one of ours.