‘A Demon Inside’ by Rick R. Reed, ‘Dead of Night’ by Victor J. Banis and ‘The German’ by Lee Thomas

‘A Demon Inside’ by Rick R. Reed, ‘Dead of Night’ by Victor J. Banis and ‘The German’ by Lee Thomas

Gay horror continues to mature as a genre with quality writing, established authors, and heart pounding tales. Though horror often finds itself the stepchild to other literature, over the last decade it has reached more and more audiences and gained acceptance as a legitimate form of discourse, beyond some pop entertainment—good for beach reading but little else. Renowned authors such as Mary Shelley and Bram Stoker started this battle over a century ago, and Anne Rice and Clive Barker, among others, pulled it into the twentieth century.

The trend toward legitimation includes LGBT literature, where speculative fiction has evolved considerably over the last twenty years. When I came out in the early 1990s, I tripped over myself to grab any gay horror novel and engulf it in a weekend, desperate to merge my favorite forms of reading in a world where few such books existed. Now, instead of grasping for a limited number of novels, I anticipate top notch gay horror coming out frequently and contributing to a broader, more passionate, and unique gay world view. The three authors reviewed here add to this development.

With A Demon Inside , Rick R. Reed has done it again. Hunter Beaumont, a somewhat reclusive and sheltered young man living in Chicago, inherits an old family home in Wisconsin after his grandmother passes away. She leaves him with the warning to destroy Beaumont House. Hunter soon learns that others want him to stay away from the house, too, including his grandmother’s attorney. But no one will tell him why. Hunter’s life takes a turn for the worse when, devastated by his grandmother’s death and feeling alone, he dives into a relationship with a young doctor who is not all that he seems. Wanting to escape Chicago and his own humiliation, Hunter defies his grandmother’s wishes and quarantines himself in the ancestral home up north. Unbeknownst to Hunter, he moves into a cursed house, one with a personality of its own. After he cleans and organizes it, the house ramps up its haunting of the latest Beaumont occupant. It wakes him in the night. It starts fires and throws things around. Reed leads the reader on a fright-filled journey as Hunter struggles with his own emotions, investigates a family past that doomed this house, and must ultimately combat the structure and all that it represents.

I love Reed’s blend of realistic characters with intense hauntings. Readers will relate to Hunter, especially after he gets burned in love and wrestles with his attraction to a neighbor in Wisconsin. How can he trust this man? Should he? This is where Reed takes the horror genre and makes it something more: his novel is also about longing and uncertainty. It’s about suffering and overcoming anguish and personal demons to get through life. Add to that a house that is against you, and Reed creates the perfect mood to scare his reader. You, too, will wonder at reality. Who can you trust? Any horror story needs a strong villain, and Reed’s ability to animate the house provides the perfect one. Through it, Reed builds the mystery and suspense. A Demon Inside is a page turner, with a new twist around every corner, a new bump in the night to keep you awake and praying for Hunter’s safety. 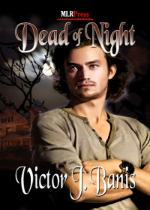 More creepy gay horror comes from the always adept pen of Victor J. Banis in Dead of Night. Another house sets at the center of this plot, as Calvin comes home from a mental institution. His parents were murdered in a nighttime raid on their house while Calvin sat alone and terrified in his bedroom. Traumatized by the experience, Calvin had sought refuge in the asylum until he felt well enough to come back to reality. Picked up from his voluntary incarceration by his brother, Bobbie, who escaped the family tragedy because their father had kicked him out of the house for being gay, Calvin determines to turn his life around by moving back into the home that he now owns. The house has other ideas. It comes to him in the night. It causes him, and the reader, to wonder about Calvin’s sanity. While others look on from the outside and even plot to remove Calvin from the family fortune, he struggles with his sexuality and searches for an inner peace. Does he find it? Or does the house win out in the end, by propelling Calvin back into the safe confines of insanity?

Banis delivers spine tingling moments that kept me up at night, not wanting to put the book down as I turned page after page to see who won this battle. He built suspense as I wondered what was behind the mystery. Banis’s characters come alive, but in a different way from Reed’s realistic people. Calvin seems uneasy and often morose, and his brother Bobbie a bit over the top. The same holds true for the housekeeper and the murder of the parents. But those very extremes suck you into the story and grip you with anticipation. I particularly enjoyed Banis’s ability to write from Calvin’s point of view while leaving the reader to wonder at his sanity. It adds a particular suspense to the story, and contributes an original element to another haunted house tale. Banis typically involves these elements in his writing: unique settings, intense personalities, and constant action. He explores homophobia, real life terror, and the pull of family. The brothers’ relationship is particularly touching and realistic, with the ups and downs of any familial bond. In Dead of Night,  Banis, too, adds a commentary about gay life to his horrific tale. 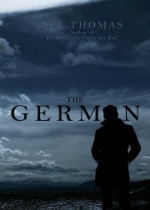 Lee Thomas takes us in a completely different direction, with more thriller thansupernatural elements in the well written and compelling The German . Set in rural Texas during World War II, the story follows three main characters, a young boy (Tim Randall) coming of age while his father fights in Europe, the sheriff of the town (Tom Rabbit), and a German immigrant (Ernst Lang) with a mysterious past that may or may not include some “other worldly” elements. With the unfortunate but realistic anti-German setting as a backdrop, this small community is torn further apart by the murder of two young men. Accusations fly, most from the native whites toward the immigrant Germans, including Lang, the gay man from whom we hear a large part of the story. When Tim and a group of teenagers spy Lang having sex with another man, their fear of the German and fantasies about who haunts their community ensnare the boy in a hateful and misguided plot to protect the town. All of which misses the real threat and sends the reader on a chilling race to the conclusion that you feel can only end badly.

On the heels of The Dust of Wonderland , which I consider a master piece of gay horror, I had high expectations for Thomas’s latest novel. He did not disappoint me. Despite their completely different world views, readers will relate to and understand all three characters: an adolescent boy, a straight Southern sheriff, and a gay German soldier come immigrant. Like Reed and Banis, Thomas explores the human condition in all of its manifestations. He leaves you to ponder the birth of discrimination, be it ethnic or homosexual. He captured the mood of America in the midst of the Good War vividly. The patriotism matches what we know historically, as does each individual’s response to the war. Thomas’s chilling moments come more from reality than hauntings, more from real fears than ghostly visitors. Yet any fan of gay horror will want to include this novel in their library. Thomas will haunt you in a raw way as your mind screams for you to turn away.

We already know that great gay writers exist today. We also recognize that the gay horror genre is flourishing. Now we need to work on combining the two. Reed, Banis, and Thomas deliver frightening moments that will make you double check that the doors are locked and the windows secure. They entertain readers searching for a good scare. But they do more. They explore humanity. Like any quality volume from the horror genre, they speak to the world around us and give deep insights. They capture moments in time, personalities, prejudices, and joys. Sit back and scare yourself. Along the way, let these authors teach you something else about being gay in America.