‘War of the Foxes’ by Richard Siken

‘War of the Foxes’ by Richard Siken 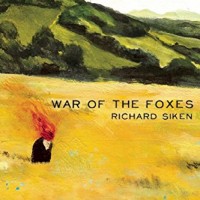 If pressed, I could not name the boys or recite our favorite passages, but I feel certain that Richard Siken’s Crush (2005) was the book all of the gay aspiring poets at my college read and reread, dog-eared, and invoked reverently in workshops and on Facebook. Its texture–its “profound wildness that is also completely intelligible,” as Louise Glück wrote in her foreword to the volume–retains for me the potency of a sense memory. Crush is a dark, restless, romantic book, single-minded in its articulation of the perils and disappointments of love between boys. The poems are brilliantly associative; their lines splatter jittery across the page. Rereading it now, Crush feels unrelenting. Masochistic, yes, but also sadistic: I feel punished by it, conscripted to witness and therefore participate in Siken’s abjection. None of which diminishes my love and admiration, but I love and admire plenty of things that I do not quite enjoy.

War of the Foxes is Siken’s first collection of poems since Crush. It’s hard not to read the new volume against the first, especially because the painter who narrates many of War’s poems so easily stands in for the poet himself. Siken’s language in Crush was self-consciously cinematic–“Cameras are everywhere,” wrote Glück, “the means by which an instant can be replayed over and over”–and so a shift to the visual language of painting is a shift to suspension rather than projection through time.  This shift (from film to portrait, from movement to stillness) is visible in the poems’ form. Where Crush’s lines splayed out toward the margins, War’s fall neatly into line, organized into tight stanzas and narrow paragraphs.

But it’s misleading to position War as a disavowal of Crush’s kinetic logic. Despite the more orderly stanzas and the pose of a tighter hand on the reins–and it’s only a pose, of course, Crush too was meticulously assembled—the voice is still distinctively Siken’s, fanged, droll, darkly self-critical:

He has an unrivaled ear for the various tones of quarrel. His speakers are alternately impatient, wry, didactic, tender, clarifying, qualifying, tentatively earnest, and veiled in their confessions.

Though none of its poems are frantic or rushed, the projection of order in War is only ever aspirational. The sitter always eludes the paint; this failure becomes the true object of the painter’s interest and the true subject of every portrait. The artist and his subject are in this way simultaneously allies and antagonists, necessary partners in the construction of the image even as they must constantly confront the gap between a frozen moment and a dynamic identity:

_______________And everyone secretly wants
to collaborate with the enemy, to construct a truer
version of the self. How much can you change
and get away with it, before you turn into someone
else, before it’s some kind of murder? Difficult,
to be confronted with the fact of yourself.

Lovers in Crush always risk hurting each other; painters in War always risk incomplete apprehension of their source material. Each is a betrayal, a way of dividing a whole–the couple, the subject–against itself. “It isn’t / fair,” Siken’s painter admits, “the depth of my looking, the threat of my / looking.” Much like Crush’s romantic disputes, portraits are investigations of where the self hits the surface. The lover and the painter both assign themselves the task of clarification, of overcoming the opacity of another. By turning his attention away from literal representations of love, Siken’s latest book makes the more radical assertion that any attempt at intimate knowledge commits a kind of violence against that which would be known: “All these things and what to do with them. / We carve up the world all the time.” His endlessly recurring scene is not a breakup but a war: in the artist’s paintings heads are severed, territories are conquered, soldiers charge the empty field: “War, and the art of war, and the / landscape of war. Grant me freedom from objects, / says the painting. I will help you, says the paint.”

The painter’s narrative vocabulary of collaboration with an enemy and the paintings’ visual vocabulary of war meet in the figure of the spy, who only arrives midway through the volume. “Spies are pollinators,” reflects the poet, “They take the bits from here and there to make a new thing grow. Does it matter to which team this new thing belongs?” Characteristically, Siken is more interested in describing this complex position than assigning or alleviating culpability. “To testify against yourself is an interesting thing, a sacrifice.”

A spy reports against his homeland’s interests–he is divided against himself. When Siken writes, “You / want to solve something? Get out of your own way,” he means it in the manner of opposing teams: you against you, blocking your own passage. In Siken’s poems the spy is also confessor, meeting the enemy at the border and divesting himself of secrets: “Clemency at the fence. These small repeated revelations // stabilize something.” The attempt to articulate (or, for the painter, represent) may be a betrayal, but it’s also a relief. Inquiry—in love or in art—offers its own pleasures and becomes its own end. “Together we trace out the trail away from doom. There isn’t hope, there is a trail. I follow you.”

'Bachelor Girl' by Kim Van Alkemade
'The Wolf at the Door' by Jameson Currier
Tom Spanbauer: Truth Through Fiction

Sam Huber is a writer and editor living in New Haven, CT. He is a books columnist for Feministing.com and a graduate student in English at Yale University.