‘Postcards from the Canyon’ by Lisa Gitlin

‘Postcards from the Canyon’ by Lisa Gitlin 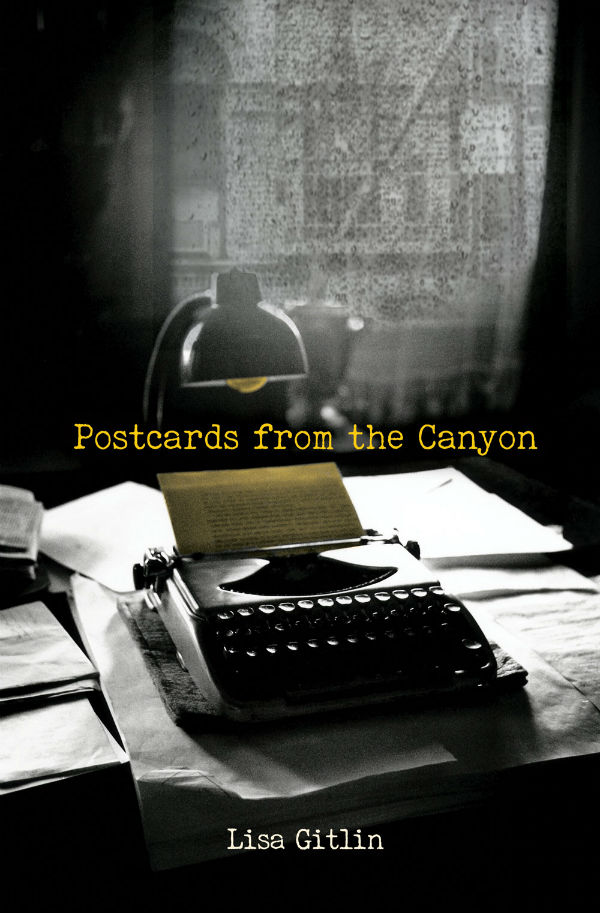 Postcards from the Canyon opens with an introduction from Joanna Jacobs, the lead character. Joanna’s life is spiraling after her ninety-year-old mother died unexpectedly thanks to a failure on the part of the medical system, so she’s doing what she knows best—writing:

I was in shock through the funeral and the shiva and I’m still in shock, and I don’t even know why I’m writing about this because it just happened and it’s not such a good idea to write about the death of your mother when it just happened; you have no distance from it, you’re just ejaculating words, except I’m a writer and I think I have to write write write.

Throughout the book, Joanna continues to hold forth. In the introduction, she tells us that she’s been paid a visit by two FBI agents for calling in a bomb threat to a talk show. Specifically, she’d threatened a woman who is running for the U.S. Senate because she made callous remarks about health care and people who can’t afford it. Is Joanna a dangerous woman who would actually “plant a bomb under her ass and blow her to the moon because she and her reactionary idiot friends are trying to ruin this country”? No, of course not, and even the agents can see that. But she needs to do something, and so she’s writing another book.

Postcards from the Canyon is like two books in one, with each chapter told in two parts. The first is always from the memoir that Joanna is writing, which spans from her childhood until her freshman year at university. It’s told in the second person, and is immersive as it brings an immediacy to Joanna’s young perspective. Even from an early age, we can see that Joanna has big feelings and little impulse control, and she’s driven to do things that she can’t always understand and doesn’t have the vocabulary to explain. In the first chapter, Joanna’s in grade three and she develops her first crush—which leads to cringe-worthy attention-seeking antics—while she simultaneously gets a serious hate on for a new girl in her neighborhood. All the while, her compatriot Molly is with her.

In the second part of each chapter, we’re brought back to Joanna in the present. She shifts between reflecting on what she’s written from her childhood and talking about what she’s going through in the months following her mother’s death. Sometimes she shares what Molly thinks about the chapters, and those insights (as well as Joanna’s indignant responses) highlight exactly how unreliable our dear narrator is. Even as Joanna claims that Molly is “rewriting history for some reason I cannot fathom. I probably shouldn’t even be showing my book to her,” we know that Joanna is doing some rewriting of her own, through a combination of Joanna’s impulsive nature, the trickiness of accessing memories from decades gone by, and the grief goggles that rule her entire outlook. As Joanna says, “Writing this book is so disorienting. I can’t tell if I’m just having vivid memories of my childhood while I’m writing this or if that child is still inside of me and I become her as I’m writing.”

Joanna’s life in the present is a train wreck as she continues to have visits from the FBI, undocumented immigrants are moved into her building, and a group of young boys who are up to no good take over her apartment like it’s their own personal clubhouse. It’s impossible not to want to shout at her to make better choices, but as she takes us through her life in the 1960s, we learn that it’s never been less than chaotic. Seeing everything through Joanna’s eyes as she and her friends bully a local lesbian couple, as the small group gets involved in the local civil rights movement, and even as Joanna has a stint in the psych ward is poignant because we’re invited to feel everything she did in the moment as well as whatever she may be feeling as she dredges up old memories.

Eight years ago, the world was treated to Lisa Gitlin’s excellent, unusual first book, I Came Out for This? Told in diary form, it delivers the perspective of a woman named Joanna Kane, who also makes a lot of bad choices. Postcards from the Canyon takes all of the strengths of I Came Out for This? and amplifies them. Joanna Jacobs makes far worse decisions, and somehow all of them make a strange sort of sense because of her grief and her persuasive way of explaining herself. And whether she’s telling her story in the present or recounting her past to us in the memoir, the writing is crisp, compelling, and evocative. For example, when she tells us about finding The Rise and Fall of the Third Reich on her parents’ bookshelf, she says, “You return to the book every day after that, devouring the same nauseating passages, like someone gorging on hundreds of marshmallows burnt to a crisp and getting sicker and sicker but not being able to stop.” And in a way, reading some of the passages in Postcards from the Canyon is kind of like that—Joanna doesn’t shy away from telling us hideous things, and yet it’s impossible to stop reading them.

Postcards from the Canyon is not a book to be missed. Once you pick it up, it will grip you by the throat and hold you in place, not letting go once you’ve finished reading it. Lisa Gitlin is an author of immeasurable talent and I look forward to seeing more from her in the future.