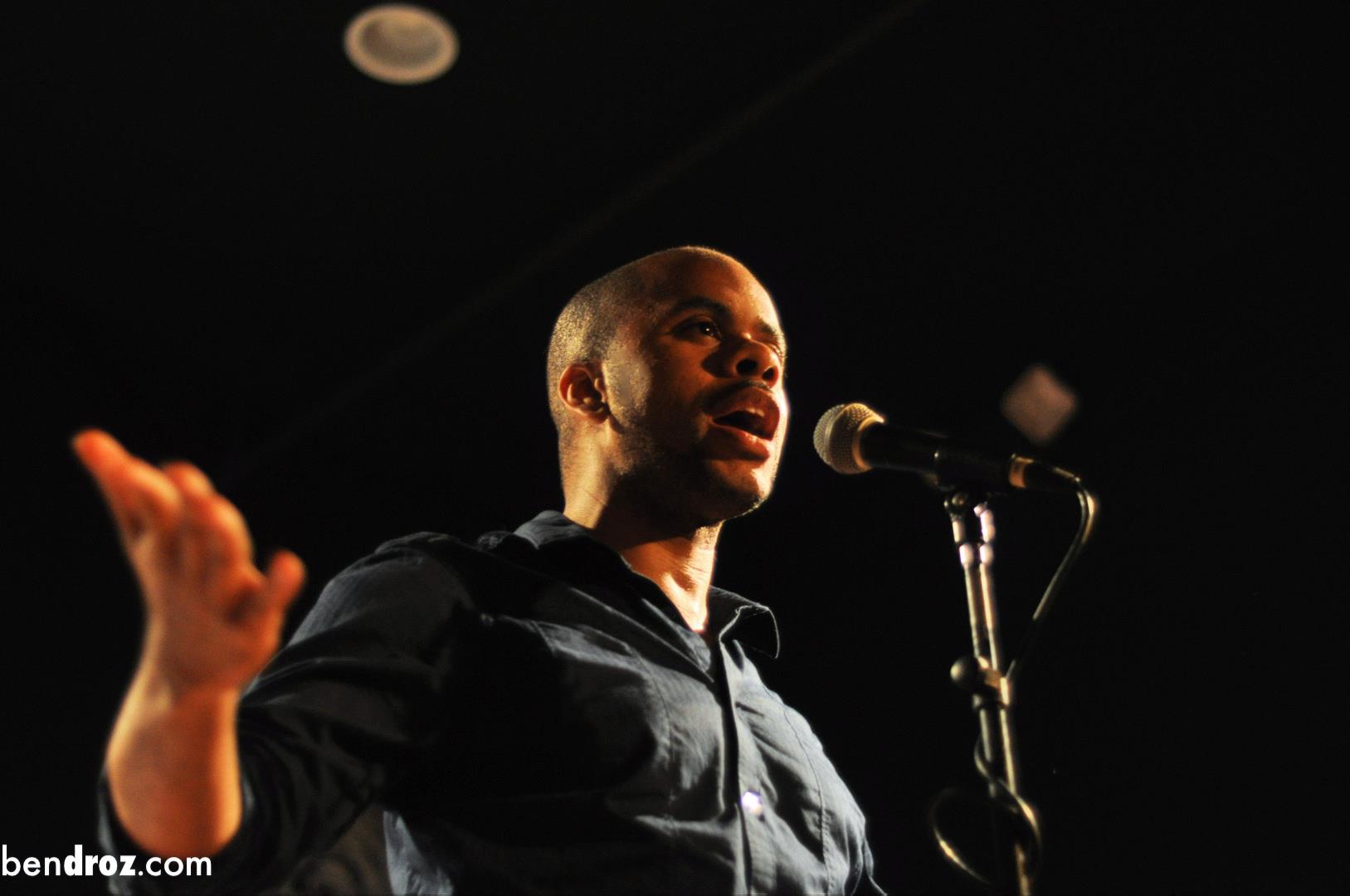 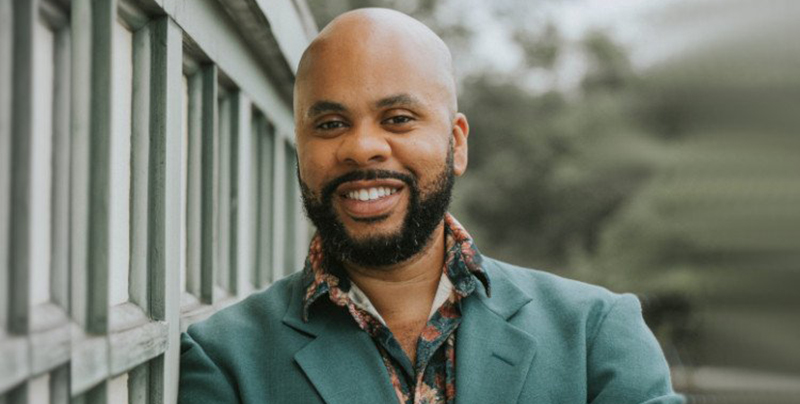 It’s essay time! No, not the miserable kind from undergrad that left you crying in a puddle of cheese doodles. These are fun and endearing essays. See below for a sneak peak at former Lambda Literary Fellow and famed Elle columnist R. Eric Thomas‘ collection of essays, Here for It: Or, How To Save Your Soul in America. Even just reading this little nugget might have saved my soul tonight…

Throughout my early thirties, I loved to tell stories on first dates. I considered myself very good at first dates and I decided the stories 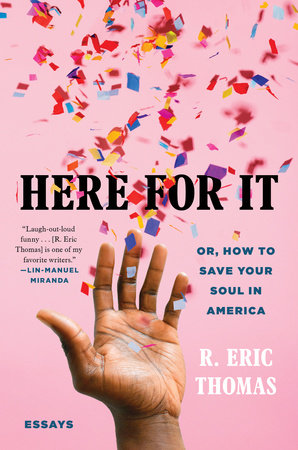 were why. I didn’t get a lot of second dates, though, so maybe I wasn’t actually good at first dates. And maybe the stories were why. I’ll have to take a poll. If you have dated me, please send a brief email just saying “Yes” or “No.” I’ll figure it out. Whatever the truth is, something was different with Jay, my first long-term boyfriend: we went out and then we went out again and, miracle of miracles, we kept going out.

Apparently that’s how these things happen. Who knew?

Jay and I were complete opposites. He worked nights, I worked days; he was white, I was a self-conscious Nilla Wafer; he loved horror movies, vampires, and camping in the woods, I was a God warrior whose idea of roughing it was staying at a hotel with no concierge. But you know what Paula Abdul says about opposites: you take two steps forward, I take two steps back, but when we get together we move in to a beautiful, high- ceilinged apartment in a Philadelphia brownstone with each other after dating for six months.

One of the more interesting differences between us was the way we expressed ourselves artistically. He was a visual artis—paints and sketches mostly, but also photography, makeup, sculpture, models. I worked with words—stories, plays, the solo show I was perpetually attempting to write.

At that point, because it was my first long-term relationship, I didn’t know what a reasonable expectation for two people trying to make a life together was. That’s the thing that romcoms never teach you and short stories about rich white couples who live lives of quiet desperation are too far gone to cover: What is the act of making it? What’s a red flag and what’s just a weird personal detail that you can spin into a charming anecdote? The line is thinner than you think.

We’d had a really stunning meet-cute. He worked in a supermarket and I was in a season where I was eating all of my feelings, so I saw him multiple times a week. I had saved up for months to buy myself a stand mixer, and I was putting it to use on the regular: cakes, brownies, biscuits. I had a lot of feelings. Plus, a stand mixer had been my dream for so long, I didn’t want to waste a second of our time together. There’s little that I love as much as a kitchen appliance. For years, I’d dreamed of a melon-colored stand mixer and a Vitamix, the super-powered blender that can make everything from yogurt to soup. After some arduous months of saving and working overtime, I had one of the two and I was living half of my best, Great British Bake Off life.

This lifestyle naturally leads one to the supermarket quite frequently, and though I’d noticed Jay behind the deli counter more than a few times, I never spoke to him, because I have no game whatsoever and I was really focused on buying a bunch of ingredients for a complicated cake that wouldn’t taste as good as one from a box. And he never spoke to me, because he thought I was, in his words, “a straight businessman.” Honey! He wore glasses but that prescription must’ve needed some work. Picture me shimmying through the aisles of a supermarket, dancing to “Isn’t She Lovely” on the store radio (which, remarkably, lasted my entire visit every time; that song is roughly three years long), carrying a tote bag and pushing a cart full of truffle oil, cake supplies, and a Vanity Fair. Move over, The Rock, there’s a new paragon of masculine heterosexuality on the scene and she’s ready to serve!

Jay and I eventually met in the middle of Philly’s Gayborhood. He was coming from a night out at a bar; I was coming from losing a standup comedy competition. I hadn’t really thought I was a good match for standup; I have trouble memorizing things and also I like to sit. Plus, I was a storyteller and not everything is funny, despite my best efforts. But a friend had convinced me that I needed to be bolder if I was going to make something of myself. “If you wanna be somebody,” my friend told me, “if you wanna go somewhere, you better wake up and pay attention!” (My friend is Sister Mary Clarence from Sister Act II.) The motivational advice of a Las Vegas lounge-singer- turned-nun mixed with the shame of defeat as I passed through the Gayborhood. Then I saw Jay stepping out of Woody’s. “Wake up and pay attention,” Mary Clarence whispered in my ear. I walked up to Jay and said, “You’re the supermarket guy!” He nodded, startled, and then we made small talk as we walked down the street. He was in a rush, so he started to make his exit and almost stepped into the street as a bike came careening past. I grabbed him by the arm and pulled him back—to save him from the bike, not to kidnap him into more conversation, but really this line, also, is thin. He thanked me and went on his way.

The next day I walked into the market, pranced up to the deli counter, and told him, “I saved your life last night.”

I decided not to entertain his befuddlement. “So I think it’s only appropriate that you give me your number,” I said. The boldness! In the middle of a Sunday afternoon. Who did I think I was? She’s America’s Masc Straight Businessmince Icon, that’s who!

Jay looked stricken, probably because a random man was shaking him down for his telephone number. He gave it to me anyway, though, and told me he was off work in an hour if I wanted to get coffee. I said sure, and spent the next sixty minutes wandering the aisles listening to the second half of “Isn’t She Lovely.”

Excerpted from HERE FOR IT: Or, How To Save Your Soul in America copyright © 2020 by R. Eric Thomas. Used with Permission from Balentine Books. All rights reserved.