Zinesters Do It on the Photocopier: A Look at the Queer Zine Archive Project

Zinesters Do It on the Photocopier: A Look at the Queer Zine Archive Project 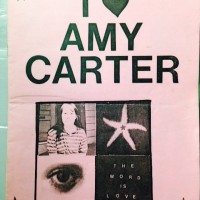 The Queer Zine Archive Project (QZAP) in Milwaukee, Wisconsin, which holds over 1300 hard copies of queer zines past and present, was born of punk music, the DIY aesthetic, anarcho-queer politics and a little romance.

With Chris Wilde and Milo Miller as co-founders (a practical, if hierarchical, term that goes against the grain of their anarcho-queer personal and political worldviews), QZAP flourishes not only because the two skillfully collaborate with dedicated volunteers and interns, but also because the very nature of queer zine culture is itself a radical promise of commitment by and to those who are underrepresented and already on the margin.

Wilde came out in the arts scene in Minneapolis. “I was already in the local art scene that was linked with rock, punk, androgyny and experimental theater.” Part of the cacophony chorus around the dawn of spoken word as an art form, he says, “I was just expressing myself, doing performance about gender identity and queerness.” Miller came out into ACT-UP in Milwaukee and was involved in AIDS activism; he worked for friends doing a Morrissey zine and went to all-age night at clubs around town. Both Wilde and Miller came of age when Internet relay chat rooms tagged #gaypunk and online newsgroups such as alt.zines were a principal means of virtual communication among queer punks.

Wilde and Miller met at Queeruption, an annual international queercore festival and gathering, in San Francisco where Wilde, a native Minnesotan, was residing at the time. Miller says he kept seeing Wilde at organizing meetings and other venues. “Chris and I started to date, and we discovered we both had collections of and an interest in zines that was both political and personal.” The Queer Zine Archives Project opened its doors in Wilde and Miller’s apartment in the Riverwest neighborhood of Milwaukee in 2003.

Together, they have been successful in attracting zinsters and collecting zines from all over the world, and have zines in French, Dutch, Italian, Arabic, Hebrew and myriad other languages in the collection. “The collection is meant to transcend borders and verbal language,” Miller says; “the project is international in scope even while it is predominately in English.” 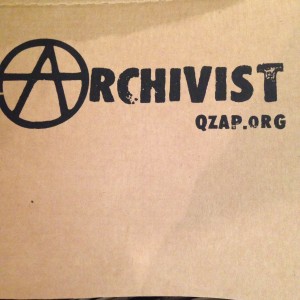 A rebuke to mainstream and gaystream media alike, queer zines are an independent medium for the transmission of alternative ideas and art. For example, in QZAP’s collection reside Charlotte Cooper‘s A Queer and Trans Fat Activist Timeline, which records the timeline of said activist and body acceptance movement; Tom Jennings and Deke Nihilson’s Homocore, an anarcho-punk zine published from 1988 to ‘91 that was for and about the hardcore punk gay underground; and Tammy Rae Carland’s I ♥ Amy Carter, which runs the gamut of lesbian themes and obsessions, most of which are tagged by QZAP thusly: “Amy Carter, lesbian, dyke, Kristy McNicol, pussy, Madonna, Sandra Bernhard, Sharon Gless, fifth column, kathleen hannah, Mr. Lady, Audre Lorde, David Wojnarowicz, pop culture and tabloids.”

The Queer Zine Archive Project celebrated its eleventh birthday in November 2014 and offers a free digital archive of both herstorical and current zines on the Web. 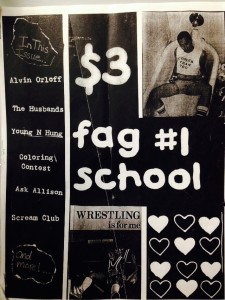 Wilde and Miller support the project mostly out of their own pockets. Though QZAP’s overhead is low, web hosting—which entailed a recent upgrade, because in their words, “our punk rock web ethos had limitations”—costs the most, while office supplies, daily care and maintenance of the workspace use the remainder of funds. The founders say that they would also like to be able to print their own propaganda, T-shirts, buttons, postcards, etc., to garner attention for and collaboration with QZAP at the regional, national and international zine fairs and other gatherings that they each attend, alternating the duty of representing the organization.

The core mission of the keepers of QZAP is that it be free and accessible. This is in contrast to mainstream media, including mainstream LGBT media. Miller says, “Monetizing everything really changes the terms of use and access, and no one is getting rich anyhow, but free access is such a different reality.” He mentions OUT and The Advocate, where, incidentally, former rock critic Adam Block wrote and inspired many a queer zinester with his piece “In Search of the Homo-Core Underground—A Beginner’s Guide to Gay ‘Fanzines,’” in the October 11, 1988 edition of The Advocate.

Wilde himself wrote “Up The Mainstream Without a Paddle,” a piece about queer zines that also references Bill Van Parys, author of “Fag Rags Come of Age” (Issue 563, 6 Nov 1990, p. 70), which included interviews of “black editors of zines such as Fertile La Toyah Jackson Magazine and Chicago’s Thing, about wide ranging topics.” Wilde’s piece also mentions Glen Helfand’s “Not a Laughing Matter?” (Issue 576, 7 May 1991, p. 70), which profiles Tom Shearer, the first editor of Diseased Pariah News, the zine that “challenged everyone’s assumptions regarding the impact of the AIDS epidemic and brought politically incorrect humor and fighting spirit to the fore.”

Another of QZAP’s great inspirations is lesbian-feminist author and activist Joan Nestle, co-founder of the Lesbian Herstory Archives in New York City. “She showed us the what and how,” says Wilde, “and we have so much gratitude toward her.” He and Miller also cite The Leather Archives in Chicago, Toronto’s Canadian Gay & Lesbian Archives and the Twin Cities’ Quatrefoil Library as other sources of inspiration.

In 2009, Wilde participated in an artist’s residency at the Roberts Street Social Centre in Halifax, Nova Scotia. His zine, Queers in Stardust and the Spiders from Halifax, chronicles his experience there creating and curating Spew Fo(u)rth Halifax, which continues to heavily influence his work.

Today, QZAP runs loosely as a collective, with Miller and Wilde making de facto decisions by way of financially supporting and materially housing the archives. However, says Miller, “The collection receives the love and support of many friends and various strangers. We also have coding queers, queer librarians and queer historians who learned from QZAP and who now contribute their specialized skills.”

Stephanie Schroeder is the author of the memoir Beautiful Wreck: Sex, Lies & Suicide. She has published essays, entries, and short fiction in various anthologies and guidebooks, including the queer classic, That’s Revolting: Queer Strategies for Resisting Assimilation and the more recent Lambda Literary Award-nominated anthology, Here Come the Brides: Reflections on Lesbian Love & Marriage. Published widely as a journalist, her writing appears in various publications.