‘Ziggy, Stardust and Me’ by James Brandon

‘Ziggy, Stardust and Me’ by James Brandon 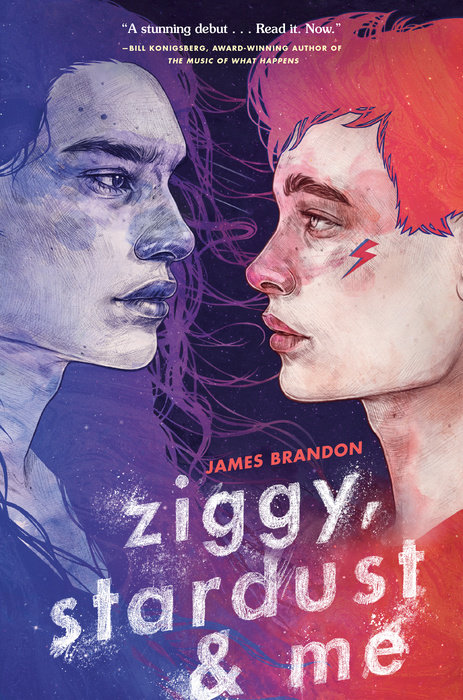 Stories about romantic and sexual love between girls or between boys come to us fairly often these days, and emphasize why young adult fiction matters in the age of intense structural and political insensitivity.

YA writers are a devoted community, and many craft their tales not merely as entertainment but as education without pedantry. The best of these, like Ziggy, Stardust and Me, inform and inspire while telling a damn good story. Our tribe has been redacted from history, such books remind the first unredacted generation, with an exhortation:  Let’s live as ourselves and keep our lives on the page!

Ziggy takes us to a time in our not-distant-enough past, when “conversion therapy” was the province not of evangelical fanatics but of the psychiatric profession, and subsidized by medical insurance. In this powerfully character-driven story, we meet two teenage boys from very different cultures. Debut author James Brandon brilliantly rises to the dual challenges of weaving a compelling love story into the backdrop of history while navigating the tempestuous waters of cultural interpretation, on whose jagged rocks even writers as well established as J.K. Rowling have crashed.

Jonathan Collins is a mess when James Brandon drops us into his life. Nearly as distrustful of others as he is of himself, he attracts the violence of high-school bullies, including the boy who was once his best friend. Jonathan’s single coping strategy is to hide from these “Apes.” His evasions work reasonably well. In the last days of eleventh grade, alone with the distracting and colorful fantasies he calls “thoughtstrings,” Jonathan passes his daily lunch period safely locked in a bathroom near the football field and far from the cafeteria, the venue of choice for frequent incidents of cruelty. His one true friend, a girl named Starla, is making plans that promise to carry her far from the St. Louis suburb in which they have grown up.

At the same time, what Jonathan, who is white and raised in the Christian faith, learns of his new friend’s world enchants him. Until recently, Web has lived close to his traditional Lakota family in a remote area of South Dakota. Web sees himself, and his family sees him, as a “two-spirit” boy—animated by both a male and a female soul, as his people have considered young men and women like him for untold generations. He is not naïve enough to be surprised that in Jonathan’s world a boy is shunned and punished for loving another boy. But he is grieved as he comes to understand that Jonathan is doing everything he can to suppress such feelings and obliterate his growing love for Web himself.

James Brandon takes us on the journey that, as a writer brought up in Catholicism, he took when he learned about two-spirits. Web tries to explain:

“I guess my people revered people like me once. Like forever ago. Because they thought we had some special healing powers or something . . . like, we have these two spirits, male and female, dancing in us—”

Jonathan struggles. “A gift? It’s always been a curse in my world. A curse that can never be broken.”

Brandon has explained in interviews that he learned of two-spirit traditions while on an international tour with Corpus Christi, Terrence McNally’s play about a young gay man growing up in 1950s Texas who has a lot in common with Jesus. “When I was a kid, a priest made a comment that gave me the clear impression that a third grader could burn in hell for having a crush on another third-grader,” he says. After a 2010 performance of the play, in which Brandon portrayed the Jesus-like character, he was approached by two Native Americans who were moved by Corpus Christi’s message of spiritual inclusion. They talked with him about the ancient Native American two-spirits customs.

“That conversation rocked my understanding of the world,” Brandon says, “to learn that some LGBTQ people are embraced by their spiritual communities. A young-adult love story was gathering force in my heart, and I decided that I would do the work needed to responsibly include a Native American character whose family accepted them as a two-spirit.”

Ziggy gives us suspense, heartache, hope, and a deep sense of belonging. David Bowie’s spirit, manifest in the androgynous, bisexual Ziggy Stardust character he created for his 1972 album, inspires Jonathan to discover and embrace who he really is.

A love story invites the reader to jump aboard a waterlogged raft and paddle with the lovers on a turbulent river. The most reliable formula, popular since Pride and Prejudice and still successful in the age of Brokeback Mountain and Call Me by Your Name, has the lovers at odds with each other, but primarily with themselves, as they battle society’s strictures, their expectations and self-doubts, and the frightfully likely possibility of heartbreak. Past the final bend in the river, the rapids subside and the waters flow smoothly. Either the lovers paddle along together, happily ever after, or one is left to grieve the other’s failure to survive the ordeal that challenged them upstream.

A new generation of love story is emerging, and LGBTQ authors like James Brandon are developing it: socially-conscious romance. Many of these authors are writing for an audience between ages 12 and 18, the YA tributary, which may inspire authors of adult-targeted “Literary Fiction” to take notice and take some new risks.

Do you remember your first love story? If you were lucky, it resonates even now in your heart because something spoke directly to you.

Long before we had L, G, B, T, Q, or even YA, generations of young readers had to stretch to find books relevant to their own lives. Oscar Wilde gave boys a tease with his pansexual hedonist Dorian Gray, but girls had a particularly difficult time finding relatable literature. Emily Dickinson’s thirty-six year correspondence with her beloved sister-in-law, Susan, was not generally known except to Dickinson insiders, and its obscurely juicy passages were whispered about until the letters eventually were compiled in the single 1998 volume Open Me Carefully: “Come with me this morning to the church within our hearts, where the bells are always ringing, and the preacher whose name is Love—shall intercede for us!” That letter from 1852 triggers historical interest, of course, but young women had to wait longer for books like Rita Mae Brown’s explicitly juicy Rubyfruit Jungle (1973).

During the mid-20th century, books like John Knowles’s A Separate Peace, published in 1959, approached relevance for young men—a novel not quite about a physically passionate love, but certainly about a love, between boys who occupied what, a few decades later, would be known as the Young Adult demographic.

And young men found inspiration in passages like this, from William Maxwell’s 1945 novel The Folded Leaf, about two high school boys: “Lymie slept on his right side and Spud curled against him, with his fists in the hollow of Lymie’s back…. Lymie lay there, relaxed and drowsy, aware of the cold outside the covers and of the warmth coming to him from Spud, and Spud’s odor, which was not stale or sweaty or like the odor of any other person.”

Twenty-one years after the book’s publication, the year I turned 14, I read that passage at least 1,000 times. I never re-read the part depicting Lymie’s suicide attempt.

These books’ popularity endured among readers a generation younger than their intended audience. True “homosexual fiction,” most memorably James Baldwin’s Giovanni’s Room, from 1956, depicted loving and fully sexual relationships, but involving adults—and with a familiar twist of the knife: one of the lovers must succumb to a fatal character flaw. Finally, with Patricia Nell Warren’s The Front Runner in 1974, we got a widely available love story involving a young gay person. Though the book was awkwardly written, its audience gratefully read the inspiring story of lovers who ignored society’s disapproval and achieved greatness together.

Pioneer YA author Judy Blume broke sales records in 1975, and earned a place on the American Library Association’s top 100 banned-books list, with her novel Forever, which begins, “Sybil Davison has a genius I.Q. and has been laid by at least six different guys.” After this explicit gate-crashing, publishers trod cautiously and Young Adult sexuality became elusive and above-the-waist. No definitive rules govern YA authors, but editors know ban-prone material when they see it. Teenagers pass a banned book among themselves furtively and read it obsessively, but such a book misses the all-important school library market. By the time New Zealander William Taylor published his series including The Blue Lawn and Jerome in the 1990s, YA authors had embraced stories about teens who are “Questioning,” and increasingly about those who are fully living their sexuality and “Don’t Need to Question.” And by 2017, with Release by Patrick Ness, about a gay teenager growing up in a fundamentalist Christian family, sex had begun to move out of its circumspect shadows. Adam, the 17-year-old central character of Release, plans a 2:00 p.m. sex date with a boy named Linus and texts him, “Blood is flowing places. Engorging things,” to which Linus responds with two thumbs-up emojis. Subtle but unmistakable, with Adam’s engorged parts decidedly below-the-waist.

In Ziggy, certainly no guidelines stop Jonathan and Web from removing their shirts, sliding their sweat-slicked chests together, kissing deeply and unhurriedly, and cuddling all night. Jonathan occasionally surprises himself, and the reader, perhaps never as much as when he has the opportunity to share physical love.

James Brandon has written, “Our history is not a part of the curriculum. LGBTQ youth are five times as likely as others to harm themselves.” In his Author’s Note he urges his young readers, “You can be part of the change, not only through mobilization and protest, but by listening and learning from others’ unique perspectives, and by simply being You.”

A few enlightened state legislatures have taken steps—California’s FAIR Act is one example—to incorporate the political, economic, and social contributions of LGBTQ people into educational textbooks and the social studies curricula in public schools. Until such efforts are successful nationwide, likely a very long time from now, we are relying on YA authors to demonstrate to young LGBTQ readers that by leading authentic lives they are making an important contribution to the progress of humanity.

Jonathan Collins, the hero of Ziggy, Stardust and Me, takes risks he never imagined possible, and encourages the reader to do the same. When violence erupts, when compassion is needed, Jonathan surprises the reader and himself. His example will inspire readers of any age.