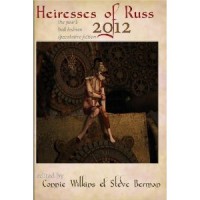 In the Introduction to this collection, editor Connie Wilkins says, “Among the gifts claimed for us by Joanna Russ…is the right to write and publish fiction about women who are…the central actors in their own lives.”

Stop and think for a moment what that means. Ask yourself, how can a person fail to be the protagonist of her own life story? That would be possible only if her life story were really about someone else. The woman herself is not important; it is the “someone else” who matters.

Having grown up at a time when all the good stories were about boys and men, I learned at a very young age to imagine myself into the male roles, because the girls and women in stories were, for the most part, either silly or boring. They did stereotypical things, like baking cookies and bandaging skinned knees. In short, they were not real. The boys were real.

If we believe those bad old days are good and gone, the election of 2012 (not yet decided as of this writing) should change our minds.

Until recently, stories about women who enjoy the same freedom as men to determine their own destiny have been rare. Women in older stories suffer from—and struggle against—the same restrictions endured by women in real life. Perhaps that explains why stories with strong female protagonists appeared first in speculative fiction. For a mainstream audience, the depiction of a strong woman running her own life was just too weird, too unreal, too “not of this world,” and frankly, too frightening. Her story had to be consigned to the world of the imagination, to a world that doesn’t really exist.

But that is why fiction is so subversive. It shows us what might be. Seeing ourselves in stories as strong, independent, self-defining women encourages us to become strong, independent, and self-defining. When we could imagine ourselves into the minds of women who took themselves seriously, who valued and nurtured their talents and pursued their own dreams, we could more easily imagine the lives we wanted for ourselves.

Heiresses of Russ 2012 is a collection of stories about women who are living their own lives as if they matter, women who claim their right to self-determination, women who do not subordinate their own needs, wants, or desires to those of anyone else unless they want to. As if we are not quite certain of our liberation, the memory of oppression lurks in the shadows of almost every story, yet the women in these stories possess the courage to live authentic lives.

“In Orbit” tells us: You must never use a golem to show you the truth, for what it does with that truth may be more than you can bear… But you can use truth to raise a golem. When she sets out to choose the man she will marry, Sarah discovers that her society’s expectations will not work for her, so she chooses what will. At heart this is a story about Truth—how to recognize truth and how to respect the power of truth, even when the truth revealed is unexpected.

“La Caida” speaks of a craving that can’t be satisfied until an angel falls. In this vampire story, a family of women in Mexico uses their gift for good, according to their lights, but one of them cannot be satisfied by what nourishes the others. What is it that makes angels fall?

In “The Thick Night,” a woman who has been betrayed by people in some of the worst ways imaginable learns to trust by loving a machine. And perhaps the story is also telling us that as human beings we MUST love, even when we cannot trust, so we find the safest thing to love that we can.

The atmosphere of “And Out of the Strong Came Forth Sweetness” is pervaded with a sense that what we want will be opposed—by men, by angels, by people in authority. …in the end, it always came back to pitchforks. The hero of this story never doubts her own power and her ability to find a way to live her own life, regardless of the opposition.

In “The Tides of the Heart,” a sea captain captures an undine, a water spirit, to use her powers for his own ends. The undine shares the predicament of many women. She is trapped by a man who believes he has the right to use another person for his own purposes, never considering that she may have purposes of her own.

“D is for Delicious” warns that people who are denied the opportunity to live authentic lives will eat your children.

In “Thirteen Incantations” two teenagers experience moments of a grown woman’s life through the perfumes she makes. The images evoked by the scents, aided by a bit of spell-casting, create a complete experience of a few moments in the woman’s life. It is a gift to the girls, and also a reminder to us that life is made up of moments like these—moments to be experienced, savored, remembered.

“To Follow the Waves” tells about a dream-crafter whose gift is to imbue gems with the dreams her clients wish for. To sculpt fantasies in the stone of the mind and the mind of the stone. All is well until she makes a dreamstone for herself. The astonishing result takes us through a labyrinth of consequences—the perilous consequences of using people as objects, even as objects of fantasy. It felt like theft. The dream-crafter discovers the other as the other, not the fulfillment of her dreams, but a dreamer herself, dreaming her own dreams. The collection is worth reading for this story alone.

All of the 14 stories in this collection speak to the desire of every human being for self-determination. Some are about escaping oppression. Some are about freeing ourselves from old ideas about ourselves. All celebrate the ultimate dignity of the individual. And all are based on our trust that what fosters the growth of the individual increases the life of the community as well.

These stories do more than simply show us women who claim their right to live as freely as men. In the rush to demonstrate that women are the equals of men, we often forgot that women are different from men, and that our differences are strengths, not weaknesses. In these stories, women’s unique strengths are not so much demonstrated as assumed, and in many of them I feel an undercurrent I haven’t felt before in feminist fiction. Humming along inside them are hints of a subtle shift in focus, from the “big” accomplishments, although they are there too, to the “small moments” that illuminate our lives, the moments we live for.

But there’s more going on here, and I’m not quite sure what it is. Now that we are free to pursue our own dreams, we may be dreaming things the world has never seen before. Perhaps it will all be more clear in Heiresses of Russ 2013.

Catherine M Wilson is the author of the trilogy: When Women Were Warriors. You can learn more from her author website: http://catherine-m-wilson.com