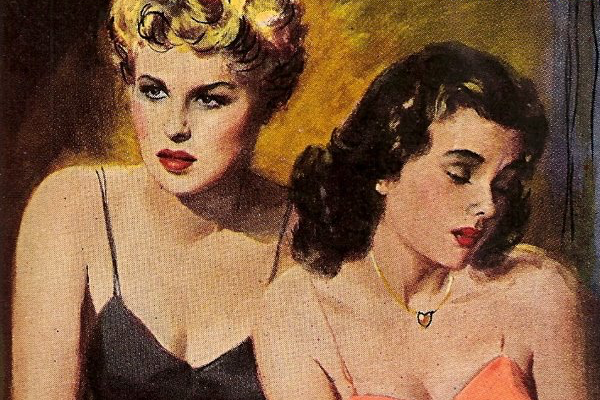 Natasha Frost revisited lesbian pulp fiction for Atlas Obscura–books that, “for many women of the 1950s and 1960s, […] were pivotal, and sometimes even life-saving” in spite of the fact that they probably weren’t intended for them at all, because “within their pages lay physical proof that they were not entirely alone in the world.”

In an interview for the TLS, Bret Easton Ellis spoke with Natalie Olah about his thoughts on the future of fiction, and whether all the recent progress in LGBTQ rights may have an adverse effect on gay fiction:

Look, there is no way of saying that gay rights, culminating in gay marriage, and that sort of freedom is a bad thing. Or you could say that the great gay subculture is gone. Is there going to be another [Robert] Mapplethorpe? Another Tennessee Williams? Is there going to be another Kenneth Anger? Is everything now really under the umbrella of a corporate mandate that says we all have to be the same–gay people and straight people?

They also talked about the new nonfiction book Ellis has just finished–his first in eight years–which he describes as a “pseudo-memoir” based on some of his “podcast rants.” There’s no pub date yet, but in the meantime you can listen to those rants on his podcast.

Sam Barsanti at The AV Club wrote about Kristen Stewart’s upcoming directorial debut, which will be an adaptation of Lidia Yuknavitch’s 2011 memoir The Chronology Of Water. Stewart is currently finishing the screenplay, and is planning to film it this summer.

At Lit Hub, Carley Moore spoke with Michelle Tea about her new book Against Memoir, as well as her thoughts on success, failure, and Trump voters.

Over at the New Yorker‘s Page Turner blog, Fergus McIntosh wrote about how Alexander Chee’s fiction, especially his novel Edinburgh, helped Chee come to terms with reality. Chee explores this in his new essay collection, How to Write an Autobiographical Novel; as he says in the book, “Sometimes you don’t know who you are until you put on a mask.”

Joseph Osmundson also wrote about Chee’s new book for Guernica, and the importance of books like it for LGBTQ kids growing up without mentors in the wake of HIV/AIDS.

And if you need something new to read, head over to Autostraddle for their list of their personal favorite LGBTQ novels.