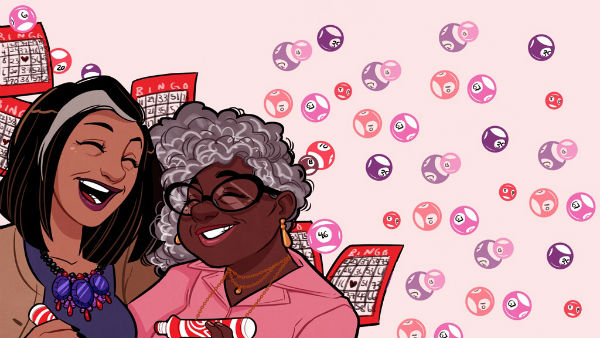 This week in LGBTQ news…

If you haven’t already heard about it, check out Bingo Love, a new graphic novel focusing on two queer women of color and the love story that spanned the course of their lives. Teresa Jusino, a writer from The Mary Sue, interviewed the author, Tee “Vixen” Franklin, about her writing and the significance of diverse publications like Bingo Love. In the interview, Franklin commented:

I just want people in general to realize that love is love is love is love,” Franklin insists. “Let people fall in love with whomever they want. Stop judging others. I want to show that inclusion is important, representation matters and not just on the pages, but also on the covers. I’m a Queer, Black, disabled woman and I have stories to tell—vital stories. There is an audience for stories like Bingo Love, don’t dismiss them.

Inspired by the book, Two Boys Kissing, a story about two boys protesting a homophobic hate crime by breaking the world record for longest kiss held, the Atlantic Gay Men’s Chorus is performing a musical production based on the best-selling novel written by David Levithan. Elijah Sarkesian, a writer from Project Q Atlanta,  interviewed Joshua Shank, the producer of the Atlanta musical adaption which covers the fictional lives and loves of young queer boys as told by a chorus of older queer men. As Shank stated, “All of these stories are told to the audience by a Greek chorus of gay men who lost their lives during the AIDS crisis in the 80s. So it’s perfect for a gay men’s chorus to bring that story to life.”

For those of you out there hungering for more fiction with LGBTQIA+ content, Autostraddle recently published a new list of Queer YA novels coming out this year. Autostraddle writer Patrice Caldwell, states:

Queer young adult fiction is exploding right now, but with so much out there, how can you figure out what to read next? These 25 queer YA novels — including superheroes, romance, small-town mysteries, mermaids, assassins and more — all feature or were written by LGBTQ women, and are perfect for spring and summer reading.

Given the fact that the majority of my school semester syllabus mostly consisted of books written by straight, cis, white men, this reading list is a welcome relief.

Speaking of Queer YA, recently Teen Vogue featured an interview with YA author, Hanna Nowinski, on her upcoming book Meg & Linus, a story about two queer best friends and their experiences with love and heartbreak in high school.

Recently, Metroweekly conducted an interview with the famous queer cartoonist and graphic novelist, Alison Bechdel. In the interview, Bechdel discussed her successful career thus far, discussing her work, Fun Home, and the award-winning Broadway musical based off it. Alison Bechdel revealed the possibility of future projects, including one already in the works, “I have a bunch of things in the fire. My main project is a book called The Secret of Superhuman Strength that I’m working on, which is sort of a memoir about exercise and fitness and mortality and the aging body.”

Unfortunately, not all queer literary news is as positive, as Washington Blade reported that Delaware’s Proud Books, a queer bookstore is now permanently closed, having shut its doors for good on April 17, 2017. As one of the few specifically LGBTQ bookstores in the U.S., Proud Books provided a valuable service to its patrons, providing a tolerant environment for queer customers looking for content that reflected their own lives and experiences, as well as a place to promote local and national authors’ works. So let’s honor this queer establishment for all that is has done, and hope for more like it to pop up in the near future.

In Time Magazine, firebrand Camille Paglia called for the necessity of more open speech and free thought, especially in this day and age:

History moves in cycles. The plague of political correctness and assaults on free speech that erupted in the 1980s and were beaten back in the 1990s have returned with a vengeance. In the United States, the universities as well as the mainstream media are currently patrolled by well-meaning but ruthless thought police, as dogmatic in their views as agents of the Spanish Inquisition. We are plunged once again into an ethical chaos where intolerance masquerades as tolerance and where individual liberty is crushed by the tyranny of the group.

In other news, the New York Rainbow Book Fair will soon be taking place on April 29th at the John Jay College of Criminal Justice. The festival will feature a variety of authors, publishers, editors, and agents from across the LGBTQIA+ community, celebrating the wide diversity of queer literature in the U.S.

Other literary announcements include the finalized list of all the nominees for the 2017 Hugo Awards.

This month, The All State profiled Dorothy Allison, a Lambda Literary Award winner, dropping in on an English Professor’s creative writing class to speak about her work and listen to her advice to new writers on how to create their own.

Think religion and the queer community can’t get along. Think again. Crux announces a new book, Building a Bridge: How the Catholic Church and the LGBT Community Can Enter into a Relationship of Respect, Compassion, and Sensitivity. Friar James Martin, the author of the book, discusses including opening up new lines of communication in order to nurture more compassion and tolerance between the Queer community and the Catholic Church.

The Washington Post has paid tribute to revolutionary queer poet, Essex Hemphill.  Though the poet clearly “left too soon,” dying from AIDS at the age of 38, Hemphill, through his poetry, many of which captured his intersectional identity as a queer black man, has contributed a major legacy for the LGBTQ community and was once described as the “unofficial voice of the city’s black gay community–lyrical, charismatic and fiercely political.”

Brian Selznick discusses the various themes and influences in his books with The Los Angeles Review of Books‘ Jonathan Alexander, including the theme of self-made families:

For the most part, everyone grows up, leaves home, makes new friends, falls in love, and eventually forms their own families. When I was growing up in the 1970s and ’80s, I didn’t know any other gay people and felt very alone in certain ways, even though I had a loving family. It wasn’t until I got to college and then moved to New York that I met other gay people and discovered that gay people actually have a history, and a culture and famous icons. Many gay people make similar discoveries when they leave their biological home (though now with the internet and the nature of the world this discovery often happens much, much earlier). Either way, creating a new family is often a very key part of a gay person’s life, and it seems as if, without my realizing it, this idea has permeated not just Hugo, but all my work from the very beginning.