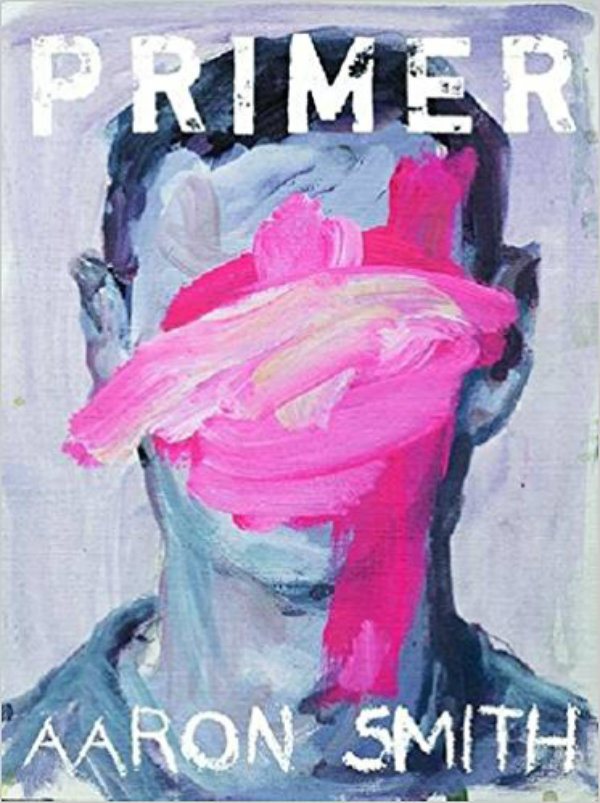 “Learn to take it/or you’ ll always be alone.”

Aaron’s Smith’s new volume of poetry is not as much about being alone, as it is about what we do with loneliness. It is certainly about learning to take it -“it” being a variety of emotional upheavals: sex, depression, family, lost love. When poets reveal their lives, they are often denigrated as being confessional. Yet these poets–and their readers –understand the power of having to skin yourself alive in order to reveal hidden truths. For them, the impetus is depth of honesty, not the silt of confession. In Primer, Aaron Smith maps out the power of this brutal truth telling and where it leads, but he also shows us the complex, often painful, ways men grapple with becoming “men–and how gay men in particular become themselves in the arena of western masculinity: its totems and ceremonies; its strength and identity; its violence, as well as its vulnerability:

My father wants to take me outside and beat me for my smart-ass mouth.

I say: I’d kill myself to get away from you, too.

We both draw lines and cross them. We both are afraid of our rage.

or the honor of men, which usually means it’s about violence.

Along the way Smith exhumes family secrets; he celebrates male desire; navigates depression and suicide. The poet grows and can ultimately look ahead to reaching a place of enlightenment–the only way out is through. These are powerful poems, composed in stark and convincing language. Their intimate voices compel us, page after page. If poetry succeeds by making language a prism, Smith has given us an inordinate amount of light to see with. It is a ‘primer’ in the sense of being a teaching or preparatory manual, but I also read some of these poems with the knowledge that a primer is also something that prevents absorption of subsequent layers–those layers being emotional, sexual, or experiential.

who let me sit with them

on the school bus, saved a seat for me

at lunch, who knew who I was before I did

Thanks for flexing, wrapping arms around my neck, making a place when I needed a place.

Thanks for going shirtless.

It is perhaps this quality of the poems–that sense of acceptance, which though hard won, is a primary factor in determining how we move through trauma; it is this stance of acceptance that give these poems such a sense of hope. Not that the poet claims all scars heal, or that there won’t be more of them, but that we don’t go it alone. By revealing these wounds with a wry lyricism, Smith show us that we have fellow mentors of the tribe with similar experiences.

There is a section in this collection with poems about famous movie stars, such as Julianne Moore and River Phoenix, in which Smith creates small cinematic frames that capture indelible moments of the actors on screen. The poet transforms them into verbal portraits, that mirror the emotional landscapes of many a gay experience:

Wearing a purple sweater in Far From Heaven.

Holding her stomach in The Hours.

With extra-white teeth in The Assassins.

“You must get over here please . . . please because he’s dying  please . . . Cut. That’s a wrap. They forgot to turn off the camera the last day he filmed.

In the footage: he’s a silhouette in candlelight walking forward.

In “A Letter Regarding Your Recent Artwork,” Smith, with shrewd humor but dead-pan seriousness, hits on the vagaries of rejection and the almost comical, austere language that critics use when trying to tell us a particular artistic work didn’t measure up. And whether it’s painting or poetry, we’ve all been there; Smith sharpens the knife a bit and turns it back on them:

Dear Artist, we have decided to paint over your mural. It doesn’t meet our standards  . . .

Dear Artist, this isn’t about your race or sex or orientation. This is about us. Our community,

which is your community.

Dear Artist, we have painted over your art. We wanted to include everyone.

In “This Exact Sky,” Smith’ questions what makes anything we do worth it; and simply and poignantly answers:

It’s summer, and you’re grilling out with friends. Everyone is love­

buzzed on red wine or beer-slurring

Someone hands you another beer. Someone invites you for a secret cigarette. It’s not that you understand your life any better, or know how

you woke up, started again. It’s that

backyard under this exact sky with these good people, and you don’t want

your stupid, tiny life to end.

Primer is revelatory. The book opens up a dialogue on trust, joy, rejection, celebration, fear, and anger. But the book’s essential power and beauty is its sense of emotional knowledge; knowledge of the gay community’s long history of “learning to take it” and surviving.

'Frank: A Life in Politics from the Great Society to Same-Sex Marriage' by Barney Frank
'with the dogstar as my witness' by John Fry
Blacklight: Commentary on the Past, Present, and Future of LGBTQ Crime Fiction