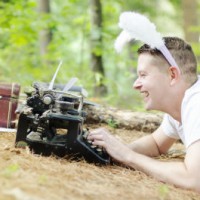 Simply put, Michael Graves’ debut novel, Parade, magnifies the talent on display in his short fiction. A burning church (and quite a bit more) propels this limousine and liquor fueled escapist fantasy, one with characters galore and of course we’re talking about fucked up Florida, that suburban utopia of strip malls and cocaine. But not so fast, for what feels like a getaway is really the route to discovery–and no one gets off easy just because they’re having highballs by the pool. That’s where Graves comes in with an assured hand. He sculpts a journey where lesser novelists staple together a series of vignettes and called it a day.

The Lichtenstein luminosity of Michael Graves’ pop culture prose paints a Hollywood buddy picture where the two main characters share nearly equal billing. Reggie Lauderdale, religious, deeply conflicted over his emerging homosexuality, is paired with the straight, aimless and besotted Elmer Mott. Along the way some interesting folk pop in and out of the lives of these two close-but-not-kissing-cousins, and that’s an important distinction; it’s essential that we gay folk explore, discuss and reveal our nonsexual relationships.

Speaking of relationships, let’s talk about how our omniscient narrator dips in and out of the story like some cool coach trying to get the best out of us. And isn’t that what the better novels (and by extension novelists) do? Pull us in the right direction without us ever feeling pulled or pushed or preached to? That’s good storytelling, when the prose and purpose of a book make for compulsive reading. There were several passages that recalled Vonnegut, an author famously adept at using beguiling prose to better ford complex ideas. I’m quite comfortable declaring that, with Parade, Mr. Graves has given us a very queer Breakfast of Champions. And I’m quite happy to talk to him about this very accomplished read.

Congrats on your fantastic novel, Parade! I’m in total agreement with Michael Carroll’s blurb where he describes your style as “tenderly transgressive yet never abrasive”–how’d you connect with him? And did any other writers give the manuscript an early read and offer pointers?

I connected with Michael through social media. I read his collection, loved it, and reached out. I asked if he would consider writing a blurb for Parade. I was sure he wouldn’t respond. But he did and he was lovely. His words about my words just floored me.

The writing process for Parade has been an interesting, lengthy affair. Years ago, I shared it with a writing group that included my pal, Belle Brett. Later, I attended Lesley University’s MFA program and worked closely with author Laurie Foos. She really encouraged me to experiment and she had quite a hand in assisting me in shaping the first few chapters. I always tell people that Laurie is my literary mother. She’s so talented and I just adore her. When she walks into a room, I swear I can hear Stevie Nicks playing. Toward the end of the Parade process, my husband read drafts. My friend Kim helped out. Jameson Currier, my publisher at Chelsea Station Editions, offered his guidance and expertise in finalizing the manuscript. Without his influence, Parade wouldn’t be wrapped up in sparkly bow.

The gay-straight alliance of the main-character-cousins in Parade is a pitch perfect wonder, so much of our fiction focuses on isolation or conflict when it comes to writing about family.

I thought a great deal about my sister, Tina. In junior high school and beyond, we were inseparable. She didn’t care about my sexuality and I think she understood that school, in a social manner, was difficult for me. I feel like a bit of our friendship and our crazy memories influenced the creation of Reggie and Elmer’s relationship. I felt strongly about having a straight male presence in Parade. And I knew Elmer immediately. He’s a goober and a show off and an old soul. He’s a comedian and a politician. He doesn’t give a shit about a lot of things, but he’s passionate about important things. Like Reggie.

Both young men have juxtaposed battles with power structures: gay Reggie tackles (after being tackled by) religion, straight Elmer writes letters to the President. But what made you adopt religion as a pretty consistent theme/concern within the book?

The root, for me, is this: People are scared to talk about religion. They are less fearful of discussions concerning sex or guns. Why don’t we talk about God? Why don’t we talk about spirituality? I don’t understand it. I wasn’t raised with religion. It was always mysterious. It always felt like a secret that people weren’t telling me. I remember feeling incredibly jealous of the children who attended Catholic school. They had uniforms and they prayed. They also had a Christmas concert every year! I asked my parents if I could attend Catechism and they informed me that that wasn’t a possibility since I had never been baptized. I thought, “Great!” But I prayed in my own way and could feel that God was around me. I didn’t know who or what he or she was, but I tried to make my own way. Sort of like Reggie. At Emerson College in Boston, I began to truly study religion. Eastern and Western faiths. It was such a wonderful time of learning for me. I had a terrific professor and the classes always took place in a Back Bay church. My first boyfriend and I broke up. Interesting side note: he was a closeted Catholic guy. Anyway, writing and my classes became a perfect distraction for me. Instead of crying on the subway, I wrote the first half of my collection, Dirty One, as well as notes for Parade. I was stirred by the idea of a character that creates his own religion.

I really felt Kurt Vonnegut’s influence. Am I on to something here?

Yes, sir. I was devouring his work at one time. Cat’s Cradle, Breakfast of Champions, Player Piano. I thought he was so deep and wacky. I was drawn to his comedic abilities, his skillful sense of satire. Kurt was one of my first literary crushes. I really want to re-read him.

And this isn’t the first time we’ve chatted, a few years ago we discussed your short story collection, Dirty One, and Capote came up as an influence. So just to make you jealous, I want you to know that I now live a few blocks from the house where he wrote In Cold Blood and Breakfast at Tiffany’s. But besides that, having savored the Capotesque fizz and lime of your writing, I’d like to dig deeper this time: when did you first encounter him, and how has he stayed with you?

I am jealous! Mr. Capote was recommended to me by my former mentor, author Michael Lowenthal. He claimed we were a bit comparable, stylistically. I read Breakfast at Tiffany’s first and was struck by the fact that every one of his words had a high price tag. It was beautiful and glamorous. I thought his prose was poetic. It shimmered on the page. Capote wasn’t afraid to be glitzy with his writing and that bravery still lingers with me. I often revisit his short stories. “Children on Their Birthdays” just slays me. Miss Lily Jane Bobbit runs that town! People adore her or despise her. And she’s a mere ten years old. Lily is said to be the initial inspiration for Holly GoLightly. I often think about Capote’s life. How he eventually grappled with writing. There was such a great deal of darkness. Sometimes, I wonder if that will happen to me. Will I not be able to solve the puzzle of a story? Will I not be able to make it happen? It’s scary, I think.

Now that we’ve talked about Uncle TruTru, are there any new writers who’ve captured your interest?

Lord, I’m a terrible reader. I confess! I have wonderful intentions of constantly having a book around and being a prolific bibliophile, but no. My friend Leland Cheuk’s first novel, The Misadventures of Sulliver Pong was just released and that’s on my list. He’s funny and sweet and I know the book will be an amazing read. I’m always searching for new poets as well. Please pass along any suggestions.

Will do. Parade’s accessibility made me wonder if you considered marketing the book as YA?

I think, or hope, that it’s a novel numerous audiences will enjoy. Many thought Dirty One was a YA offering. That was never my intention, but I welcomed my youth readers. I invite everyone to give it a go. My only apprehension about YA audiences is the content. If my work contains sex or cursing, I worry that it won’t be experienced under an umbrella of adult guidance.

So having completed a successful first novel, what advice can you give the up-and-comers nipping at your bedazzled high heels?

I always tell emerging writers to simply continue to write. Don’t stop. Also, I express the importance of community. Find a writing group, find some writer friends. Above all, focus on your story, your message, and your goal.

Reggie shakes off the oppressive yoke of religion but creates his own moral code by writing his recipes, which dot the book. I’ll tell you my favorite recipe if you tell me yours.

It’s a deal. Here is my favorite: Recipe # 133 “At any time, something amazing could happen. One never knows. You may win the lottery or meet your lifetime love or become famous. You could save another from drowning. You could awake with the ability to soar through the sky. You could receive a gift from a close friend. There are countless possibilities. Simply consider them all. Maybe, if we believe these things might occur, well, maybe they will. Please…always believe in that word. Maybe. Maybe. Maybe.”

Nice one. Here’s mine: Recipe #77B, “There is no reason we can’t practice hope.”