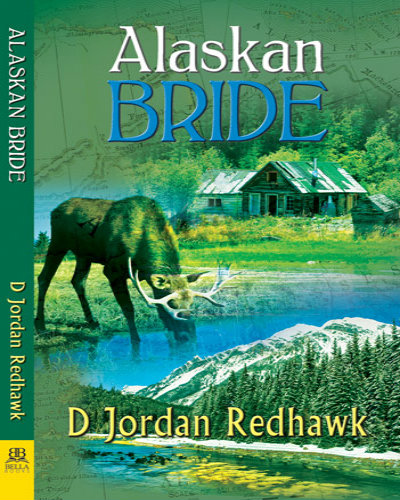 As Alaskan Bride opens, we meet Clara Stapleton, a young Bostonian from a wealthy family. As a daughter of privilege, Clara has always felt the freedom to speak her own mind and has been able to move through her world never having to worry about saying or doing the wrong thing. As a teenager, her adventures with her friend Emma have gotten her into some trouble, but she’s always found her way out of it with the help of her doting father and his money. Clara has always assumed she would marry and start a family, but eligible bachelors in the Boston area are not at all acceptable to her, so when she finds an advertisement in the newspaper from an Alaskan trapper and land owner in need of a mail order bride, she finds the request appealing, even a little exhilarating, and she responds to Jasper Glass’ appeal.

When Callie Glass learns what her brother, Jasper, has done, she’s angry and concerned. Bringing a city girl to the Alaskan wilds will change the relationship she has with her brother, as family, and in their trapping business. Still, she loves her brother and knows that, even though a family of her own is not in her future, Jasper deserves one. She finally agrees to his pleas and even helps him by writing a response to Miss Stapleton in his name, telling her to come to Alaska to be his bride.

After Clara convinces her parents that her idea is a good one, she sets out for the west coast, and finally makes her way north to Skagway, where she finds life is very different from her existence in Boston. Not only that, but when she finally makes her way to the Glass homestead, she discovers circumstances are so completely altered that she must now make another life changing decision. Not one to shirk a challenge, Clara meets it head on, but the adventure she’s about to embark upon is nothing like the experience she imagined for herself. She decides to stay. Callie insists she should go. Neither woman yields, not to the expressed wishes of the other, and not to the attraction that begins to grow between them.

This is the kind of story that Redhawk does best—women in the wilds of Alaska, driven by love of the untamed beauty surrounding them and an internal determination to succeed in adversity. Then, she skillfully sprinkles the tale with a love interest that is both unattainable and irresistible.

The main characters are resilient women, filled with opinions and with a life force that propels the story forward. Supporting roles, played by sympathetic friend Daryl McKenzie, and several “bad boys” in town who are far from congenial, are all well portrayed. The language of the story expertly places us in a time when the Alaskan bush was often unsavory and dangerous. Historical scenes blossom, giving us the feeling that the information is an integral part of the tale, with sights, sounds, and smells fleshing out passages. The main characters’ inner dialogue gives us insight into their personalities and their feelings about themselves and each other, making us privy to an emotional upheaval that makes this story compelling. The climatic conclusion is full of heart-stopping action that will keep the reader turning page after page to its resolution.

Alaskan Bride is an electrifying historical romance by D. Jordan Redhawk, set in the days of the Alaskan gold rush, filled with memorable characters, thrilling action, and romance that pulls at the heart strings.

'The Dubious Salvation of Jack V.' by Jacques Strauss
'Come Back to Me' by Chris Paynter
'Riding Fury Home' by Chana Wilson