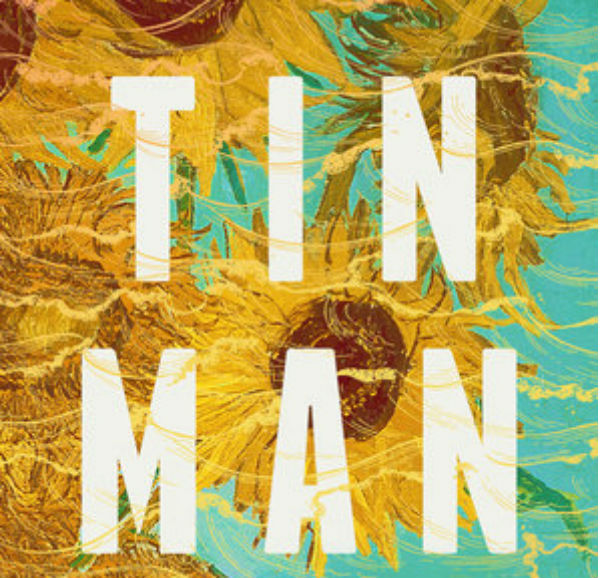 Sarah Winman’s third novel, Tin Man (Putnam), is only about two hundred pages long, but it covers a great deal of ground. It begins in 1950, when Dora Judd wins a raffle and, against her husband’s orders, selects a print of van Gogh’s Sunflowers as her prize rather than a bottle of whiskey. The novel ends some forty-six years later, with Dora’s son Ellis visiting France and opening window shutters to field of sunflowers, “a yellow world of beauty as far as the eye can see.” Between these two scenes, Winman tells the moving love story of the three principle characters–Ellis, Annie and Michael–not only over many years, but also through shifting points of view. All of this might seem too much weight for such a short novel. Except for an occasional lack of clarity in shifting time as well as one or two heavy-handed references to the painting, Winman’s novel holds up remarkably well. Her precise yet often restrained prose keeps the novel clear and focused on the story.

The first half of Tin Man is told through Ellis’ eyes. Beginning in February (“the shortest month that never seemed to end”), we find him at forty-five, working in an autobody shop. In a poignant summation of Ellis’ life, Winman tells us that “every night he wondered where the years had gone.” Annie, his wife, has recently died in a car accident. Ellis, still grieving, imagines she visits him at night while he drinks whiskey in front of the fireplace:

This had always been the worst time, when the quiet emptiness could leave him gasping for breath. She was there, his wife, a peripheral shadow moving across a doorway, or in the reflection of a window, and he had to stop looking for her. And the whiskey helped – helped him walk past her when the fire was doused.  But occasionally she followed him upstairs, and that’s why he began to take the bottle with him, because she stood in the corner of their and watched him undress, and when he was on the verge of sleep, she leaned over and asked him things like,Remember when we first met?

In flashbacks, we learn about Ellis’ relationship with Michael, starting in 1963 when Michael is sent to live with his grandmother, a local shopkeeper. Michael quickly becomes close to Ellis’ mother, Dora. Ellis tells us how Michael “clung to her every word as if they were hand-holds up a cliff face.” Dora and Michael talk about art, including the van Gogh print, in detail. Dora tells them, “Men and boys should be capable of beautiful things. Never forget that, you two.”

While art is clearly one of these “beautiful things” Dora refers to, another is surely the friendship that the two boys develop. Writes Winman, “Summer’s end they were sinewy and brown, and took up a little more space. Summer’s end, they were inseparable.” It comes as no surprise when the relationship becomes sexual.

When Ellis meets Annie, his future wife, Michael becomes her friend, too. Recognizing the bond the two men have, she tries to provide them with time alone, encouraging Ellis to see Michael more often. Yet after the marriage there is a change. Annie senses that Michael is keeping secrets from them. Eventually Michael moves to London and loses contact with Ellis and Annie. “Without Michael’s energy,” Winman writes, “they became the married couple both had feared becoming.” The blow is especially hard for Ellis, who thinks, “Life was not as fun without Michael. Life was not as colorful without him. Life was not life without him.”

The second half of the novel, related from Michael’s point of view, provides a shift in tone. Michael begins his narrative in 1989 as he tends to his lover, an artist referred to as G, as he is dying from AIDS. Where Ellis’ voice is measured, Michael’s is more direct, even jarring at times, and not without humor. Of a visualization tape he plays to help him cope he says, “the cheery American voice tells me my body is full of light and luvre and I believe it. I’m so full of light and love, in fact, that I can barely do my trousers up.”

When Michael first notices G, we understand immediately why the attraction is so powerful:

I was sheltering in the National Gallery one rainy afternoon when I noticed him in the crowd, his resemblance to Ellis staggering – kind eyes, that hair, beard waiting to break out – and I followed him for two hours across an eclectic journey of Titan, Vermeer, and Cézanne, until we ended up in front of a painting that had come to embody an important part of my childhood. Michael, who in his words had fallen “madly, intoxicatingly” in love with Ellis years earlier, “lives out the fantasy of long-gone youth” with G.

Given Tin Man’s themes–the intensity of boyhood friendships, the shifting dynamics among three people who love each other, the AIDS crisis–it’s inevitable that comparisons will be drawn to Michael Cunningham’s A Home at the End of the World. Yet Rose Tremain’s more recent The Gustav Sonata might be a better reference point. That novel (of similar length) also follows the friendship of two boys throughout decades with music, rather than painting, a recurring motif. More importantly, however, both authors convincingly depict the complexities of love that can’t be easily labeled. In that, they both are a rare find.