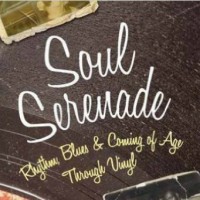 Soul Serenade is a memoir told by a voice we usually don’t hear from. Journalist and pop music critic Rashod Ollison’s memoir comes from the distressed southern neighborhoods we lament over, but seldom truly know anything about. Politicians and social commentators talk about “life in the projects,” “ghetto culture,” “urban dysfunction,” and “absent fathers” but rarely do we hear from the human beings behind these labels. And one rarely considers the possibility that there are gays and lesbians in those communities. Ollison is to be highly commended for writing this, tough, disturbing, heartfelt, and music-filled book and for making his easily stereotyped family life and background movingly real.

Rashod “Dusty” Ollison begins his story of growing up in Arkansas with a flashback to before his birth, to happier times for his family. One of the photographs on the cover of Soul Serenade shows Ollison’s parents, Raymond and Dianne, on their honeymoon in Mexico. The distance between that loving image and the reality of their later lives once Raymond returns from a tour of duty in Vietnam, addicted to heroin, is a recurring theme throughout the book. Another source of conflict is between Rashod’s parents’ families; “While Daddy’s folks were churchgoing and discreet about their messiness, Mama’s family lived out loud.” He and his siblings also face the “boiling resentment” of one of his mother’s sisters toward their family–coloring every encounter with her versus the somewhat more stable father’s side of the family that lives in a quieter, somewhat more rural neighborhood.

What connects Rashod to memories of his often absent father and helps him cope is music. The R&B music of the ‘70s and ‘80s seemed to explain and describe their lives, and also provided an escape, whether from role model Michael Jackson of Off The Wall and Thriller or the “liberating fuck-you in every primal wail on a Chaka Khan record.” It’s also interesting to read Rashod’s wounded reaction to Michael Jackson’s “turning” Bad and imitating the neighborhood tough guys who taunt him for “acting gay.”

Soul Serenade is best when talking about the role of music in the lives of everyday music lovers, as both a consolation and a vision of a possible different future. Ollison’s love and commitment to music is strong. In one chapter he eloquently describes the differences between the “older” styles he grew up with and rap, hip-hop, and other changes in African-American music:

There were messages in hip-hop that pushed for uplift, extension of the ‘we shall overcome’ outlook in the O’Jays, Curtis Mayfield, and Staple Singers records Daddy had. Keep ya head up, Tupac said… Hidden behind their invisible armor, the black boys and girls up and down the block subscribed to the pain and malice in the hard core urban sounds of Mary J. and gangsta rap, music that illuminated the darkness they knew so well… As for me, I still preferred a more ingratiating place, shepherded by a voice steeped in wisdom and experience, nurtured by a sound born out of the visceral emotionality of sanctified church singing… There behind the groove and riding on the melody, I was complete and free.

I could be vulnerable because the men were.

Shamelessly Marvin Gaye pleaded for his distant lover to come back home, all while remaining regal. Al Green could moan and squeal about the glory of love with his manhood and pride intact…to fully engage hip-hop, I felt I needed to be a member of an exclusive club, and I’d never belong. I understood the nuances of the music, its angst and tis drive, but inside of it I felt neither welcomed nor authenticated […]

Ollison also does an excellent job taking us behind the “invisible suit of armor” the women in his life, his older sister Dusa, younger sister Reagan, and his mother Dianne, needed in order to survive a life of working multiple jobs, fast food or Hamburger Helper dinners, and moving from one home to another as family resources go up or down.

Soul Serenade also shows how important support from influences outside the home can be. Although he has to be careful “to be “Rashod” and not “Dusty the faggot” in school,” it is there that he excels. Encouraged by teachers who give him Langston Hughes and works by other African-American writers to read, and urged on by members of his church to pursue recitation and writing his own poetry. He eventually is placed in gifted and talented classes, meets his all-too-brief first love in Andre, the only other black boy in gifted and talented class, and writes his first record review for his high school newspaper on Mary J Blige’s My Life. Ollison ends Soul Serenade with him coming to grips with his emotions on the death of his father, and heading for his first semester at the University of Arkansas.

Reverend Griffin, the pastor at Ollison’s family’s church, teaches him to look people in the eye when he shakes their hand, “Let them know who you are.” With Soul Serenade, Rashod Ollison has done just that. The Reverend may not approve of some of the raw language of the book, there is no denying that it is very real. The only drawback to Soul Serenade, oddly, is that one wishes there was even more music. Readers will be turning to downloads, podcasts, CDs–and records–to play along to get full effect of this riveting and engaging book. They will also be anxious for Rashod Ollison’s next set to drop.