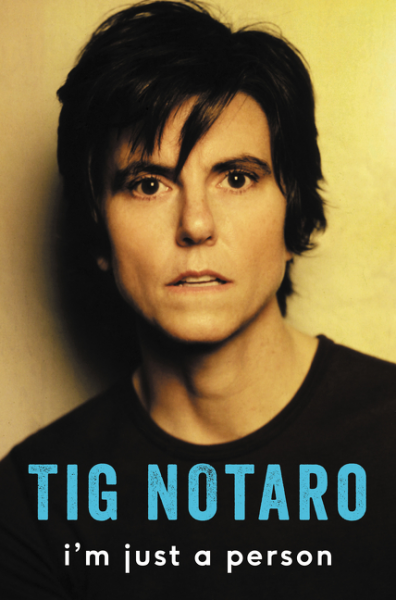 June is here, bringing with it a slew of new books to enjoy.

This month, Ecco is releasing I’m Just A Person by Tig Notaro, a memoir that charts a tumultuous year in the popular comedian’s life

One of America’s most original comedic voices delivers a darkly funny, wryly observed, and emotionally raw account of her year of death, cancer, and epiphany.

In the span of four months in 2012, Tig Notaro was hospitalized for a debilitating intestinal disease called C. diff, her mother unexpectedly died, she went through a breakup, and then she was diagnosed with bilateral breast cancer. Hit with this devastating barrage, Tig took her grief onstage. Days after receiving her cancer diagnosis, she broke new comedic ground, opening an unvarnished set with the words: “Good evening. Hello. I have cancer. How are you? Hi, how are you? Is everybody having a good time? I have cancer.” The set went viral instantly and was ultimately released as Tig’s sophomore album, Live, which sold one hundred thousand units in just six weeks and was later nominated for a Grammy.

Now, the wildly popular star takes stock of that no good, very bad year—a difficult yet astonishing period in which tragedy turned into absurdity and despair transformed into joy. An inspired combination of the deadpan silliness of her comedy and the open-hearted vulnerability that has emerged in the wake of that dire time, I’m Just a Person is a moving and often hilarious look at this very brave, very funny woman’s journey into the darkness and her thrilling return from it.

A welcome diversion from his dead-end job and the compulsive cyberstalking of the cop who broke his heart, Sam returns to the arcade again and again. When the bizarre setting triggers reflections on his own history and theories, he contemplates his anxious, religious upbringing in small-town Texas, the frightening overlap between horror movies and his love life, and the false expectations created by multiple childhood viewings of Close Encounters of the Third Kind. Then, of course, there is the subject of sex.

As his connection to the place strengthens, and his actions both outside and within the peepshow escalate, Sam wavers between dismissing the arcade as a frivolous pastime and accepting it as the most meaningful place in his life. Arcade is a relentlessly candid and graphic account of one man’s attempt to square immutable desire with a carefully constructed self-image on the brink.

This month, Feminist Press is posthumously releasing beloved writer and playwright Liz Swados‘ novel Walking the Dog. The novel humorously grapples with one character’s attempt to launch a new life after a series of drastic missteps :

Former child prodigy and rich-girl kleptomaniac, Ester—renamed into the gentile Carleen for her own protection—is incarcerated after a botched heist. For two decades, time is the enemy. Her twenties and thirties crawl by in stifling isolation. When finally let loose onto the streets of New York, she finds a job wrestling spoiled canines as a dog walker in Manhattan’s most elite neighborhoods, relating better with their brutish instincts than with their human owners. Determined to also prove herself a real person, Carleen tries to reconnect with her estranged and ferociously Orthodox daughter.

Amid the strained brunch dates, unsent letters, and the continuing trauma of prison, Carleen begins a slow and halting process of self-discovery. Strikingly funny and self aware, this belated coming-of-age novel asks the question: How do you restart after crashing your first chance at life?

Pump up the jam! Writer and television personality David Holmes maps his life through music in the new memoir Party of One: A Memoir in 21 Songs (Crown Archetype):

A Dave Holmes has spent his life on the periphery, nose pressed hopefully against the glass, wanting just one thing: to get inside. Growing up, he was the artsy son in the sporty family. At his all-boys high school and Catholic college, he was the closeted gay kid surrounded by crush-worthy straight guys. And in his twenties, in the middle of a disastrous career in advertising, he accidentally became an MTV VJ overnight when he finished second, naturally, in the Wanna Be a VJ contest, opening the door to fame, fortune, and celebrity—you know, almost.

In Party of One, Holmes tells the hilariously painful and painfully hilarious tales—in the vein of Rob Sheffield, Andy Cohen, and Paul Feig—of an outsider desperate to get in, of a misfit constantly changing shape, of a music geek who finally learns to accept himself. Structured around a mix of hits and deep cuts from the last four decades—from Bruce Springsteen’s “Hungry Heart” and En Vogue’s “Free Your Mind” to LCD Soundsystem’s “Losing My Edge” and Bleachers’ “I Wanna Get Better”—and punctuated with interludes like “So You’ve Had Your Heart Broken in the 1990s: A Playlist” and “Notes on (Jesse) Camp,” this book is for anyone who’s ever felt like a square peg, especially those who have found their place in the world around a band, an album, or a song. It’s a laugh-out-loud funny, deeply nostalgic story about never fitting in, never giving up, and letting good music guide the way. 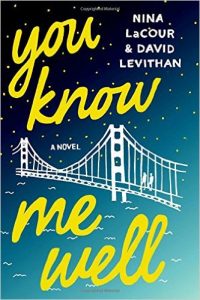 First love is never easy. This month, St. Martin’s Griffin is releasing You Know Me Well, a new young adult novel from authors David Levithan and Nina LaCour, that provides a vivid snapshot of first love and burgeoning young friendships:

Who knows you well? Your best friend? Your boyfriend or girlfriend? A stranger you meet on a crazy night? No one, really?

Mark and Kate have sat next to each other for an entire year, but have never spoken. For whatever reason, their paths outside of class have never crossed.

That is until Kate spots Mark miles away from home, out in the city for a wild, unexpected night. Kate is lost, having just run away from a chance to finally meet the girl she has been in love with from afar. Mark, meanwhile, is in love with his best friend Ryan, who may or may not feel the same way.

When Kate and Mark meet up, little do they know how important they will become to each other–and how, in a very short time, they will know each other better than any of the people who are supposed to know them more.

A book told in alternating points of view by Nina LaCour, the award-winning author of Hold Still and The Disenchantments, and David Levithan, the best-selling author of Every Day and co-author of Nick and Norah’s Infinite Playlist (with Rachel Cohn) and Will Grayson, Will Grayson (with John Green), You Know Me Well is a deeply honest story about navigating the joys and heartaches of first love, one truth at a time.