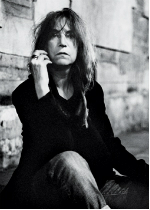 Smith tells Billboard the next book “is in more of the ‘Just Kids’ vein and even in the similar time period, but shifts more to family, Fred (Smith, the MC5 guitarist and her late husband), music. So it’s a different perspective. ‘Just Kids’ was very focused on Robert and my relationship with Robert and wanting to be an artist, and the next book will be more, perhaps, music-based.”

The sequel is only one of the many projects Smith has in the works, along with her “Patti Smith: Solo Camera” photo exhibit, the Just Kids screenplay, and a tour promoting her new album Banga. Read more about what Smith has in mind for the book and the projects she’ll be working on next year here.