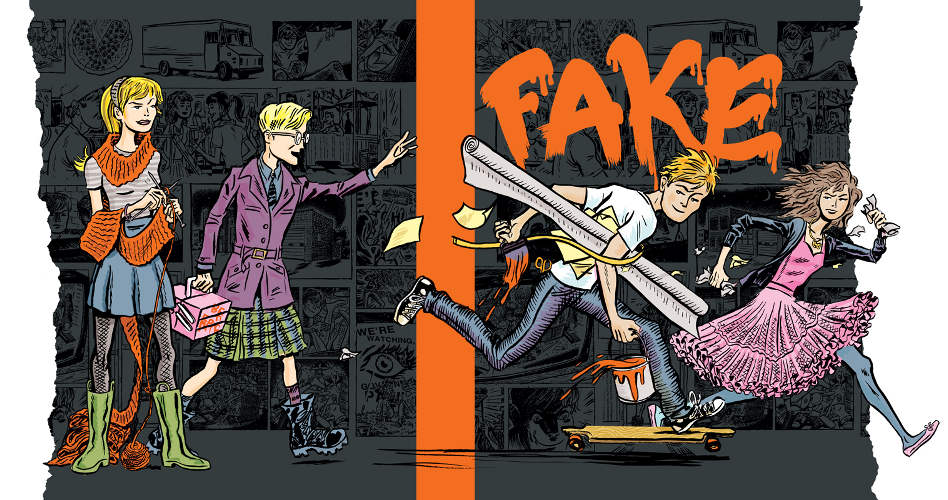 Frankie is the most boring member of his multi-talented family—at least, comparatively speaking. His mother impersonates Frank Sinatra, his father is Dr. Frank-N-Furter at the local Rocky Horror Picture Show production, and his tulle-obsessed and detestably perfect, younger sister, Lou, is a darling of the school theater troupe. Frankie? He just blends into the background. He doesn’t sing, doesn’t dance, doesn’t act, but he does create some beautiful artwork on walls, canvases, and pizzas (you don’t get the nickname Pepperoniangelo at work for nothing). Disappearing into white noise is a theme that carries over to his translucent existence at school where he’s content to coast in the background as an ’introverted weirdo’.

One evening, while Frankie is working at Pizza Vendetta, the most delicious girl in school, Rory, and her skirt-wearing, gender-bending cousin David (think Bowie) saunter in and dangle an irresistible opportunity: help them help their uncle, an anonymous Banksy-like street artist named Uncle Epic, install some new pieces in his home turf of Minneapolis. A longstanding fan and protégé of Uncle Epic’s street art, Frankie doesn’t pause to contemplate exchanging his cloak of boring invisibility for late nights building and installing meaningful artwork that reacts to the tainted extremities of culture and consumerism. Frankie’s underground thrills are augmented when he discovers that Lou has been involved in nefarious, criminal behavior unbeknownst to their parents. In the name of infamous sibling rivalry and general disdain for their shared bloodline, Frankie begins installing street art of his own as a form of artistic blackmail to annihilate Lou’s manicured façade. Frankie discovers that, like Uncle Epic’s installations, art lets you confront your griefs and to hell with the target. But when the target is your sister, when is a moral line crossed?

At the crux, this story of statement-making art and a love affair with creativity is all about the power of blurring lines and altering perceptions of acceptability. Frankie is highly attracted to Rory, the quintessential sex-bomb. Conversely, cousin David makes his attraction to self-identifying heterosexual Frankie clear. For the first time, Frankie wishes he was gay because he can totally see being David’s boyfriend. This triangle of attraction isn’t lascivious, drawn-out, or injected to make sexual orientation a didactic component of the narrative. However, it presents a case for the malleability of sexuality when, like Frankie’s exit from ennui, one is open to a new experience outside of regimented “normalcy.”

David’s skirts (he doesn’t have a scene without one) also speak to a blurred line. His sartorial androgyny garners the usual closed-minded cat calls but he also gleans admiration from Frankie and even flirtations from Lou because of it. And though Frankie’s parents are bending genders in their own right as cross-dressing performers, Frankie has another parental figure, a hermaphroditic sculpture named Donna Russell, hidden in the confines of his makeshift secret studio. Comprised of male and female mannequin parts, this artifice of love, compassion, and acceptance is neither male nor female, but an amalgam of both in form and name, a symbol of what being whole means: expressing and exploring both the feminine and masculine and finding, with honesty, an authentic balance. The book is also a balance between text and art. Johnson’s bright orange, black, and white illustrations replace what might have been Cronn-Mills’ text on the pages, continuing the narrative intermittently through visuals rather than type. The melding of these two métiers speaks to the significance of fine art as a valid voice and means of expression, a timeless tool for storytelling.

Frankie begins his story as an outsider within his family, at school, and as a lone wolf artist. As he evolves, there is the revelation that when you are part of a group of outsiders, you’re by default, no longer an outsider. But being in can also put you on the outs if you don’t keep your moral compass in check (especially if you drive a conspicuous, dilapidated white moving van spotted in the environs of Uncle Epic’s latest commentary involving live sheep). This marriage of text, art, masculine, feminine, legal, contraband, revenge, rebellion, and understanding is a handbook of ambiguity’s spectrum. What’s not ambiguous? The satiated feeling of having read the written and illustrated version of a tasty wood-fire pizza, carbs be damned.

Walt Odets on Sex, Pleasure, and Reimagining Gay Men's Lives
'This Life Now' by Michael Broder
'He Do the Gay Man in Different Voices' by Stephen S. Mills