‘The Man With the Overcoat’ by David Finkle

‘The Man With the Overcoat’ by David Finkle 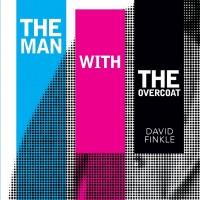 It is October, on an ordinary Tuesday evening (at 6:18 PM, to be precise) and Edward “Skip” Gerber has just exited the elevator into the lobby of the Manhattan office building where he works as a real estate lawyer. Preoccupied, he accepts a grey overcoat from a stranger:

It was double-breasted and made of a sturdy but soft woolen material in an almost imperceptible small herringbone pattern so dark and darker grey it was almost black. The collar and lapels were generously wide. The sleeves ended in wide cuffs and, like the front closings, featured horn buttons. The hem looked as if it would fall just below a man’s calves. There was a double seam at the back that, from what Skip could tell, gave it a flare and a flair.

With the simple admonition “Here you go, and be very careful with it” the stranger disappears into a crowd of New Yorkers.

Thus begins Skip’s adventure. (Or is it nightmare? Could it be both? How will Skip know? How will we know?) Unable to return the overcoat to the stranger, he investigates the contents of the overcoat’s pockets and finds a pair of black kid gloves, an unopened roll of Halls cough drops, a business card, and a slip of white composition paper with an address written in pencil on it. Determined to return the coat, Skip uses these clues to track down its owner. For the next twenty-four hours he criss-crosses Manhattan via cab, following clue after clue and reaching innumerable dead-ends. He also, curiously, receives numerous compliments on “his” overcoat from everyone he meets.

That, then, is the basic premise behind David Finkle’s The Man With the Overcoat. Initiated by the receipt of the unexpected overcoat, every following event takes on unusual significance to Skip. Suddenly, nothing, and no one, is what they seem; random events recur with a regularity that suggests to Skip that he is part of a larger story. Are these events part of a conspiracy, or are they just coincidental? Like someone who learns a new word and then hears it used successively over the following two days, are these “coincidences” simply ordinary everyday happenings that seem to be part of a larger pattern because Skip is trying to find an overarching scheme to everything that is happening to him? Or is Skip overthinking everything? Is he thinking to little? Or, is he (has he been) thinking about the wrong things?

Even though Skip appears to have left the familiar world he knows, intrusions from his normal, mundane life continually interrupt, each heralded by a different ring tone on his cell phone: his hypercritical (but eternally dissatisfied) mother, Bernice Saywer Gerber, and his unsuccessful (but favored) elder brother Jerome Gerber. Paradoxically, these intrusions keep him from succumbing to the noir fantasy (surely it must be a fantasy, right?) while also propelling him forward into it.

This grey overcoat, then, operates in a different manner than the stereotypical gray flannel suit: instead of making Skip blend in, it forces him to stand out; instead of working as a cog in the industrial machine, Skip has a day unlike any other in his life. So, does Skip manage to keep the coat from getting torn or stained? Does he ever find its owner, return it, and then return to his own life? Or does he keep the coat, and continue having adventures? You know what they say: clothes make the man.