‘Dying Words: The AIDS Reporting of Jeff Schmalz and How it Transformed The New York Times’ by Samuel G. Freedman with Kerry Donahue

‘Dying Words: The AIDS Reporting of Jeff Schmalz and How it Transformed The New York Times’ by Samuel G. Freedman with Kerry Donahue 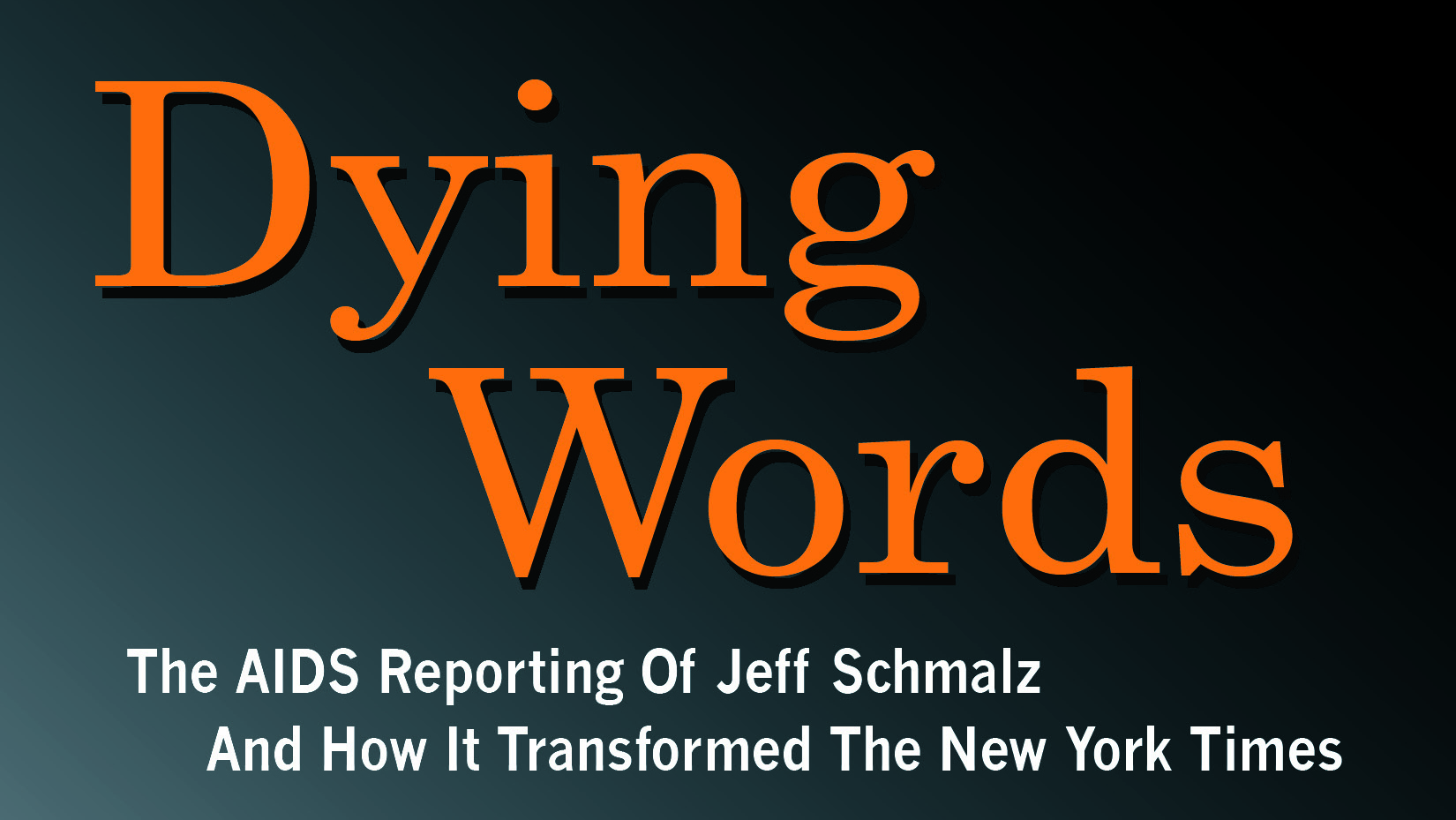 How is change made? This is the question at the heart of Dying Words: The AIDS Reporting of Jeff Schmalz and How it Transformed The New York Times by Samuel G. Freedman with Kerry Donahue.

Schmalz was a writer and editor with The New York Times, who died in 1993 of complications related to HIV/AIDS. Freedman, a writer at the Times with seven books to his credit, worked under Schmalz. Wanting to look back, Freedman worked with Donahue to produce a radio piece and book—both rooted in oral history—to explore Schmalz’s role in moving the “paper of record” from its dismal HIV/AIDS reporting to publishing ground-breaking long-form pieces about the crisis.

The fact that the book is not a written-thru, non-fiction book by a single author, matters. It was a wise choice by Freedman and Donahue to tackle the complexity of the story—which brings together HIV/AIDS, newsroom politics, LGBT rights and biography—via oral history.

Leading theorist and practitioner Alessandro Portelli suggests that oral history is about “the historical significance of personal experience on the one hand, and the personal impact of historical matters on the other,” adding that oral history exists, “where history breaks into private lives.” AIDS is a story that brings history into the most intimate of spaces: our bodies, relationships, and for many, our workplaces.

The book splits the oral histories from family, friends and peers into three sections: Schmalz’s early life and his rise at the paper; his HIV diagnosis and what that meant for him and the Times; and his legacy within the field.

Dividing the first two sections is a dramatic moment. On December 21, 1990, Schmalz collapsed on The New York Times newsroom floor. It was a moment of reckoning: Schmalz was living with HIV and things could no longer stay the same—both with him and at the paper.

Through his sister, Wendy Schmalz Wilde, we get an idea of how he got to the Times; he was driven. He worked hard to get into an Ivy League, moved to New York City as soon as he could, worked to obscure his less than pedigree past, and figured out how to both participate in the vibrant gay culture of the 1970s and meet the cultural demand of keeping his sexuality a secret at work.

Often repeated in the book was that Schmalz was the “essential Times Man.” This works to account for his meteoric rise within the Times—from copy boy to regional editor within a short time—and to build the argument that he was specifically positioned within the paper to change it’s culture. The irony that the management’s golden boy, grooming himself for success, was gay is not lost on the reader. As narrators, such as Arthur Sulzberger Jr., Michael Specter, and Anna Quindlen, track Schmalz’s history at the paper, the Times’ relationship to homosexuality is also reviewed.

Under the leadership of Arthur Sulzberger Sr. the Times treated gay men and lesbians badly in the office and on the page. Employed gay men and lesbians felt safer in the closest. Those “found out” were often reassigned by management, feeling demoted for not keeping up appearances. In the newspaper there was resistance to writing about homosexuals. (The word gay was not permitted to be used in the paper until 1987 when Sulzberger Jr. took over from his father, signaling a cultural shift at the paper.) Homophobia impacted how the paper understood and covered (or didn’t cover) the epidemic.

In recent years when a history of AIDS is told it often begins with the 1981 Times headline, “Rare Cancer seen in 41 Homosexuals.” As writer Eric Marcus points out in Dying Words, this story appeared “way inside the newspaper [page A20],” arguing that if the impacted population had been “the Boy Scouts or PTA moms, it would have been on the front page.” The reckoning of homophobia within the book is historically important and works to provide a “look-how-far-we-have-come” narrative regarding the Times, setting the stage for what is to come.

A suggestion emerges from Dying Words that, while he certainly was not the first to be diagnosed with HIV at the Times, Schmalz’s talent, drive, and good relationship with management made him a Trojan Horse of sorts at the Times, enabling him to tell the story of AIDS from within. His homosexuality and his eventual ill-health were absorbed by the paper’s management because he played the game. He made himself one of them and so because management could see themselves in Schmaltz they were able to bare witness to the inhumanity of the crisis. When he hurt, they felt it.

This could be cause for celebration, a noted moment of progress—and within the book it is. Yet below the surface, a more profound dis-ease can be detected, one that speaks to how change is made and the broader story on offer within the book.

Maintaining an appearance void of his homosexuality had been Schmalz priority’s before his fall, dictating what kind of stories he worked on. “He was in a position to do all sorts of things on AIDS coverage and gay coverage and he didn’t,” remembers writer Adam Moss. That soon changed. After he came back from the collapse Schmalz wrote first about the upcoming 1992 Presidential Elections, then about gay life in the city, and soon stories about HIV/AIDS—namely profiles of people living with HIV, and personal essays about his own experience.

In these works, many of which are excerpted within the book, Schmalz wrestles with how to be a professional and someone living with HIV. In his genre defining piece from 1992 Schmalz recalls attending a political funeral where he is asked, “Are you here as a reporter or a gay man with AIDS?” Schmaltz responds:

People in the crowd moved closer; they wanted to know the answer. I wanted to know it, too. Finally, it came out: “Reporter.” Some shook their heads in disgust, all but shouting “Uncle Tom!” They wanted an advocate, not a reporter. So there I stood, a gay man with AIDS out of place at an AIDS funeral, an outsider in my own world.

This is a turning point in Dying Words. Schmalz is placed within the larger context of AIDS. He becomes accountable for who he is and the power he has. This is much needed revelation within the book. The New York Times focus within Dying Words limits the story. It too easly braids together the story of LGBT progress within the US with the story of AIDS. And more so, without a basic survey of the media landscape a sense of the networked responses to HIV both within media and from outside holding the media accountable is lost. There is no mention of DIVA TV, AIDS Community Television, Disease Pariah News, Women’s AIDS Video Enterprise, Kiyoshi Kuromiya’s Critical Path newsletter, nor ACT UP’s attempt to take over the CBS nightly news. The exception being to confirm the primacy of the Times. Gay media’s early AIDS reporting is dismissed for not being mainstream, the work of a CNN writer with HIV is discounted because he did not work at the Times, the work of ACT UP—which is painfully often referred to as “Larry Kramer’s group,”—is mentioned but only when the Times is a target of their activism.

All of this is okay because, at its heart, the book is not concerned with the Times’ place within the ecosystem of AIDS media history. For Freedman and many of the narrators, it might not even be up for debate: the Times matters. Period. More importantly, Dying Words has a more intimate agenda, and one I think achieves a broader outcome that it intends.

Reading the introduction and hearing Freedman speak about the book it is clear Schmalz made an impact on him. Although he was only two years younger than the “essential Times man,” Freedman looked up to him, and clearly learned a lot from him about working at the Times, and about life in general. The book is wrestling with the loss of one man, and what that loss means to an individual, a community, and an institution.

In thinking about this, I am less convinced that Schmaltz’s legacy is in the realm of AIDS reporting per se. I am not sure I see how his work made space for the ground-breaking AIDS related reporting that did and does occur sometimes at the Times. For example, the work done by Linda Villarosa. It is a pity she is not in the book to weigh in.

It seems to me Schmaltz’s ongoing value as a writer is better understood through the ways in which he and his relationship to his diagnosis pushed The New York Times to adopt the subjective turn in writing. Didion, Baldwin, and so on, highlight the fact that the role of the non-fiction writer in the US was changing. No longer could they be (seen as ) the bystander typing the facts. The line between reporter and writer blurred, with everyone having to wrestle with their own personal perspectives. Watching someone like Schmaltz do it through the pages of Dying Words is powerful.

AIDS, and the resistance and urgency that helped define an early understanding of it, is part of this textual move and one that Dying Words tracks. Be it a metaphorical flourish or not, nothing about AIDS is possible on the individual level. It is all relational. No longer could Schmalz’s physical and political body occupy space and the page separately. For the good of the paper, and himself Schmalz brought them together through writing. The exceptionalism of AIDS and Schmalz’s embrace of it brought a powerful example of first person narrative to the page, and so too, to his peers, and countless readers.

This is itself a response to the question of how change is made. In the logic of Dying Words, change is made over time through personal relationships, within institutions, impacting how people treat each other and how the institution conducts it’s work. Freedman and Donahue’s use of oral history underscores this, as does Schmalz’s life.

'Spandex: Fast and Hard' by Martin Eden
'Zakkum: A Graphic Murder Mystery' by Beldan Sezen
Actor Andrew Garfield Would Like to See a Gay or Bisexaul Spider-Man