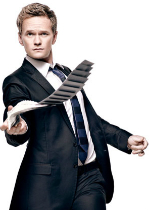 Emmy Award-winning actor Neil Patrick Harris has recently signed a book deal with Crown Archetype. Buzz is the memoir will be “a work of imaginative nonfiction that delivers an interactive, nonlinear reading experience that breaks the boundaries of conventional memoir.” Harris, a gifted magician, told the Hollywood Reporter he plans to draw on his “‘love of adventure and surprise’ to create something unique.” The book is set for release in spring 2014.

Book Excerpt: My Husbands and My Wives by Charles Rowan Beye

Keeping in the spirit of memoirs, check out this stunning excerpt from Charles Rowan Beye’s forthcoming memoir My Husbands and My Wives (Farrar, Straus and Giroux) in which Beye reflects on his relationship with his mother after being outed by a local priest.

Any honest emotional bond between my mother and me died within a 24-hour period in late April, a month after my 16th birthday, when in fact my world came apart completely. One day, I was sunning myself on a blanket while reading a book when Mother returned home, came to the porch, and summoned me in. The tone of her voice was a premonition; the look on her face made me steady myself to keep from fainting.

“I have just been talking with Father Putnam,” she began in the coldest, most serious voice I think I had ever heard her use. “He has told me awful things–”

J.K. Rowling fans will be happy to hear that the The Casual Vacancy (Little, Brown and Company)—Rowling’s first release since the last Harry Potter book, as well as her first novel for adults—has a lesbian character. Read more here.

Autumn Poems: How Poets Have Described Autumn For Centuries

And finally, the time has come—autumn is among us—arguably the most poetic season of the year. Orange leaves, hot tea, inklings of Christmas lights. If fall doesn’t make you feel like wrapping up in a blanket and settling down with a good book of poetry, then perhaps these lovely quotes will. From sad to sweet to simply breathtaking, check out the verses here.