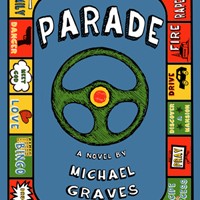 Like a pair of mismatched fraternal twins, the cousins Reggie Lauderdale and Elmer Mott form the literary odd couple at the center of Parade, debut novel by Michael Graves. Reggie; gay, uptight, conflicted, hypochondriac, deeply religious, and desperately trying to be good, serves as a foil to Elmer; a straight, dissolute, ne’er-do-well who seeks to be their hometown mayor. Neither is lucky in love: Reggie suffers a sexual assault from an equally conflicted chorister at St. Leo’s church, but it is his subsequent loss of faith that proves more damaging to him. Elmer, distraught over the death of the girl he is sweet on, accidentally sets St. Leo’s aflame. But all it takes is a winning lottery ticket, a stolen limousine, and the empty (but well-stocked) mansion of their rich retired relatives in Jupiter, Florida, and these boys are on their way to finding themselves, true love, and their true religion. With unbelievable amounts of alcohol, sex, drugs, and a cast of crazy secondary characters thrown in for good measure, of course.

While in Florida, Reggie meets Reverend Rockwell, a retired televangelist who lives next door to their Aunt Dolly and Uncle Herb. And Elmer meets Doris and Polly, a pair of flamboyant identical twins who he invites to live in his relatives’ mansion. Reggie’s loss of faith is so complete that discovering that Rockwell’s show was all an act fails to faze him; instead, he takes the Reverend’s advice, and begins writing down “recipes” for how to live a good life. (In contrast, Elmer provides recipes of various signature drinks for the reader.) Doris and Polly take these “recipes,” and publish them as a book. They also mastermind the creation of a new “church” (practically indistinguishable from a circuit party) with Reggie as the minister, delivering his recipes to an audience dressed in high heels, a cape, and very little else.

Eventually, this non-stop party must end; but by the time that happens, both cousins have matured, each becoming less extreme in temperament, and a little bit more like each other. Despite the numerous permutations of sex between the characters, it is the relationship between Reggie and Elmer that forms the heart of the novel, for it is clear that they love each other deeply—by which I mean that they each accept the other exactly as he is, and want nothing but whatever makes the other happy.

Parade rushes forward in a series of short, quick vignettes like a runaway limousine, switching back and forth between the two protagonists as they journey to adulthood. As you might expect, a healthy suspension of disbelief is key to enjoying this joyride; but amidst all the frothy high times, Reggie’s “recipes” leaven the mix with nuggets of true wisdom. So I leave you with Reggie’s RECIPE #1:

You should be good. I do not mean good at your job. I do not mean good-looking. You must be good to the people around you. Say, “hello.” Let strangers pass before you. Say “thank you.” Give someone your last root beer sucker. Say, “excuse me.” Hold the door for another. Say, “please.” Allow someone else to use the lavatory first. Say, “good day.” Lug a lady’s grocery sacks to her automobile. Say, “good evening.” Shovel the snow from your neighbor’s walkway. My suggestions could go on for countless cards. But you understand. Just BE GOOD.  Goodness always multiplies. It will lighten us all. So, just try, okay?

Watch Her is a Standout Mystery and a Twisted Family Drama
'with the dogstar as my witness' by John Fry
Paul Legault: Russian Pineapples and the 2000 Years