Kate Scelsa: On ‘Fans of the Impossible Life’ and New Approaches to Young Adult Literature

Kate Scelsa: On ‘Fans of the Impossible Life’ and New Approaches to Young Adult Literature 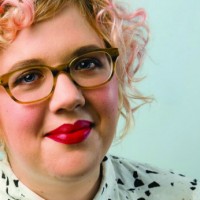 “Teens can handle reading about sex, and assuming that they need to be protected from it just seems really condescending to me.”

The young adult novel Fans of the Impossible Life follows three teens Mira, Jeremy, and Sebby as they navigate pain, secrets, and personal identity. The novel explores, through first, second, and third person narration, the complicated adolescent loves and friendships that can change you forever.

In this interview with Lambda, Fans of the Impossible Life author and seasoned playwright Kate Scelsa discusses her novel, her writing process, and new approaches to young adult literature.

Your background is in theater–talk a little about how that experience has impacted your writing style.

I definitely enjoy writing dialog the most, and the writing that I’ve done for the stage has come more easily to me than narrative prose. So I would say theater has both given me an appreciation for well written dialog and helped to encourage me to have fun with dialog. I also think actors are used to the idea of really fully embodying a character, and that’s something that I really enjoyed taking on in the process of writing Fans. The book is split up into sections that take on the point of view of the three different characters, and I felt that I only really got to the core of the story when I let myself into each of their heads.

Fans of the Impossible Life is your first full length novel–how did you go from writing for the stage to writing prose?

I’ve written a few plays, but most of my work in theater has been in working as a member of a collaborative theater company where the shows are really made in the rehearsal room through everyone’s ideas coming together and bouncing off of each other. It’s a very exciting but often challenging process, and after a few years of working with the company I found myself needing to have a creative process that was all my own, and was something that didn’t require any resources other than my laptop and my time. I have a first manuscript that came before Fans (which will remain in a drawer) that I started writing during this time, and I was so surprised by how easily the story came to me. It really felt like I was channeling something, and, although re-writing is always challenging, there was such an ease to that first draft that I got hooked. I’ll always love theater, and I’ll continue to write plays, but work for the stage inevitably requires so many resources that it makes it really difficult to get anything done. It’s possible, of course, but I love the independence of prose writing.

My favorite thing about your book is how nuanced and complex the characters are. Did they spring fully formed from your brain or evolve as you were writing them?

They evolved a lot. Especially Jeremy and Mira. Sebby came to me the most fully formed, but the other two took a while to really reveal themselves. And it was only when I really let myself take them on in a way that was very personal that I started to understand what they were all about. The first, second and third person narration was always there, but it wasn’t organized by character. And it was when that strategy presented itself that everything clicked for me about who these people are and why they do what they do. I’m fascinated by how that change in narrative perspective really changes our feelings about a character as readers.

Where did the idea for FOTIL come from? What was your writing process like? What were some of the challenges in putting the book together?

Fans came from a lot of places. I had been reading and loving Evelyn Waugh’s Brideshead Revisited, and I had a very vivid dream about characters that reminded me of Waugh’s characters. That then got mixed up with some old parts of my life that I needed to work through and do a kind of emotional purging with. The big challenge came in shaping the work. In writing my early drafts, I allowed myself to really be all over the place, and reining that into something that would make sense for a reader was very difficult. I owe a huge debt of gratitude to both my agent Brianne Johnson and my editor at B+B Alessandra Balzer for their very insightful editing work. Without them the book would not be what it is.

Your book is super sex positive. Did you feel like writing pretty specifically about queer sex was a risk?

I knew that I wanted to have a realistic depiction of sex in this book. The “fade to black” in YA really makes me crazy. Teens can handle reading about sex, and assuming that they need to be protected from it just seems really condescending to me. That said, there’s a whole lot of stuff in this book that I wrote thinking, “I’ll never be able to use this,” and then those ended up being the most important scenes in the book. That was a big lesson for me in the power that exists in writing things that seem too secret, or too extreme, or just too real. It’s a huge testament to my editor that she let me keep those scenes, and that B+B is in full support of the book. So it never felt like a risk to me, because writing about queer life in a truthful way is what I want to be doing. And perhaps it’s a risk for my publisher, but they’ve never made me feel that way.

How did the decision to make Mira biracial happen? Writing non-white characters is super important. Is that something you worry about as a white person?

It’s important to me to not take anything for granted about my characters. There are characters in this book who I assumed were straight, and then when I paid closer attention to them I realized that they were gay. So I am very much in support of the call for more diversity in YA lit, but for me personally as a writer, a certain level of diversity happens naturally when I just stop making any assumptions about who my characters are and where they come from. And then as a white, lesbian, cis-gendered woman, it’s my job to just make sure that I am representing any experience that is not my own in a way that feels truthful.

Congrats on being selected as an Indies Introduce author and getting a starred review in Publisher’s Weekly! How are you handling your well-earned success?

Thank you! I’ve been working on this book for so long, and writing with the hope of publication for over a decade, so it’s just a relief to know that people are excited about the book. It does feel like something separate from me though. Fans and I have really been through it together, and now I have to let her go off and live her own life. It’s like sending her off to college.

At Book Expo America, we bonded about our mutual love of Julie Murphy’s Dumplin’. What else are you feeling excited about these days?

Sarah McCarry’s About A Girl came out this summer and it is essential reading. I’m really looking forward to Kim Ligget’s Blood and Salt and Marcy Beller Paul’s Underneath Everything.

You and your wife got married in 2008, as marriage equality was finally, state by state, becoming law. Do you remember where you were for the Supreme Court decision? What do you think happens now, with the queer community?

My wife and I got married in a really interesting moment. It was 2008 and we wanted to get married in Cape Cod where we go for vacation every summer, but Massachusetts had a residency requirement based on a very old law meant to discourage interracial marriage that Mitt Romney had brought back when he was governor. The law basically said that if your marriage wouldn’t be recognized in your home state that you couldn’t get married there. But then California had that small window before the whole Prop 8 mess where marriage was legal, and this amazing thing happened where MA Republicans and Democrats alike got scared that all the East Coast gays were going to go to CA to get married because there was no residency requirement. They were literally like, “That’s our gay money!”

So just weeks before we were going to have our planned non-legal ceremony (we figured we would head to Toronto to get a license on our honeymoon), MA did away with their residency requirement and we were able to get legally married there. The fact that all of this was only seven years ago is amazing to me. I mean, I knew we would get there eventually as a country, but I feel very lucky to be living in a time when things are changing quickly. It makes me feel very optimistic about what is possible, and about participating in the conversations that we need to be having to move things forward.

I know that the HRC and the marriage equality movement have gotten a lot of flack from people who believe that marriage was prioritized at the expense of all of the other issues that face our community, but I do believe strongly that this big gesture has made an impact that is going to affect all the ways in which we now talk about equality. Marriage is something that everyone can understand. It’s showy and it involves family and outfits and cake. People can get on board with that. And now it’s going to be possible to focus on the other issues with this understanding of basic equality in place.

My wife and I were back in Cape Cod when we heard about the Supreme Court decision, only about a mile away from the place where we got married seven years ago.

Which character from classic lit (using whatever definition you feel comfortable with) do you most relate to, and why? If you could chose to be any literary character for a day, who would you chose?

I tend to really enjoy moody men as characters, because they have historically been allowed to exist in a kind of pure expression of their own angst. This is something I want to write more about in the future. How do male and female angst differ? And how have we been allowed historically to express that angst? Is male angst pure in a way that it can exist without being questioned? Because it doesn’t have to both understand itself and justify itself? This is all to say, I would live as Jack Kerouac for a day. So, in fiction it would be Jack Duluoz in “Big Sur.” Although it would be a very drunk and painful day. But I’m interested in what that pain is all about. And how it would be different from my own. Or how it would be the same.