‘Love Is Enough’ by Cindy Rizzo

‘Love Is Enough’ by Cindy Rizzo 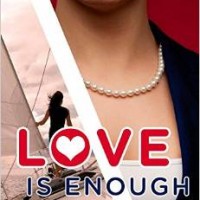 When Massachusetts Congressional Representative, Angie Antonelli, gives in to her friend Patty to go out on a blind date with investment manager, Jan Clifford, she’s convinced it will be another in a long line of misadventures. She’s convinced this new mystery woman will be just like all her previous dates since her heart was broken by Nicki Ford. The notorious Nicki walked out on Angie for another woman. However, Angie didn’t count on two things about Jan Clifford: she’s stunning and the attraction between the two women is immediate and intense.

Angie and Jan seem like complete polar opposites, so how is any kind of relationship to survive? Angie belongs to the masses.  She’s long been a champion of the small business person and has worked tirelessly to give her constituents a leg up in the neighborhood in which she grew up and now represents. The Cliffords on the other hand, represent old money, far removed from the little guy. As Vice President of Franklin Investments, Jan is poised to take over from her CEO father, Jon. In spite of this, Jan and Angie can’t seem to see the potential problems their positions could cause because their new love seems to be enough. But can it be sustained?

When Angie’s friend and author, Robin Greene, is confronted by a woman after a reading, events are set in motion that can both hurt and help Angie in her latest bid to keep her congressional seat. And the “ghost” of Nicki Ford also becomes the proverbial monkey wrench in the machinery that is the new relationship between Angie and Jan—not to mention the havoc Nicki could bring to Angie’s political career.

The major players in this story are well written and easily draw concern and sympathy. Minor characters are also multi-dimensional and flawed enough to make us almost as emotional over them and their actions as we are about the primary characters. Rizzo tells a great story with passion and keeps us absorbed on every page. Angie is charming although a bit of a lost soul when out of her career element. Angie’s mother is her “take no prisoners” political manager and has enough political savvy and shrewdness, counterbalanced with just a little paranoia, to make her daughter the beloved political figure that she is.  Angie’s friends, Tracy and Robin, are as loyal as they come, so when faced with a dilemma, they are forced to make a decision that is very uncharacteristic for them. For Jan’s part, we find a woman who is going through the motions of her career without finding fulfillment. Jan, too, has a loyal friend in transgender Hadley, himself a small business owner of a Christmas tree farm in Vermont. As Hadley tries to support Jan in her struggles, both business and personal, and as Angie’s family and friends try to help her through a rough campaign filled with big money backing and dirty tricks, the two main characters face some daunting issues within their relationship that have the potential to leave them both devastated—and asking the question: is love enough?

This compelling tale easily overrides some minor editing errors and a few instances of passive voice, keeping distraction to a minimum. Rizzo has won awards with a previous book, Exception to the Rule, and now with Love Is Enough the author takes the reader on a bumpy and fascinating ride. Love Is Enough is a clever tale detailing the struggle of two people to find happiness and a life together in spite of the great obstacles in their path. This is a well told tale about characters capable of getting under our skin. Both Exception to the Rule and Love Is Enough were published independently by the author, a monumental achievement; but to complete it with such skill, giving us such a great story, is truly a gift to her readership. This one remains with you long after it’s over.

'Daydreamers' by Jonathan Harper
'Before and Afterlives' by Christopher Barzak
'Missed Her' by Ivan E. Coyote