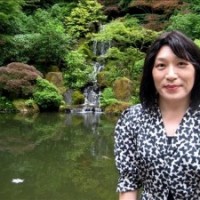 Before going to a poetry reading at Fordham University, Pauline Park and I decided to meet at Nook in Hell’s Kitchen. Dinner at the tiny restaurant was very pleasant, sauced by talk about Pauline’s ekphrastic stories and my new book of poems. She was working on a story based on Voyage to Cythera, Watteau’s Rococo painting, a favorite of hers. The Greek island of Cythera was thought by Antiquity to be the birthplace of Aphrodite. Art historians could not agree, Pauline explained, whether the pairs of lovers in the painting were going to the island of love or leaving it. Was the mood one of anticipation or that of nostalgia? Perhaps it was both, the art of the painting encompassing, somehow, both arrival and departure.

Rummaging in her large tote bag, Pauline retrieved and handed me a Xeroxed copy of her essay published in an anthology of women’s writing, Homelands: Women’s Journeys Across Race, Place, and Time (edited by Patricia Justine Tumang and Jenesha de Rivera, and published by Seal Press). In her essay “Homeward Bound: The Journey of a Transgendered Korean Adoptee,” Pauline charted her own odyssey towards accepting her ethnic identity as a Korean adoptee, and her gender identity as a transgendered woman.

The essay—and the life—is remarkable for the geography it traverses. At the age of eight months, Pauline Park was flown from Seoul to Tokyo, then to Anchorage, and finally to Chicago, picked up by her adoptive parents, and brought back to Milwaukee, Wisconsin, where she grew up in a hymn-singing German Lutheran household. That early flight set the pattern for a peripatetic life afterwards. Madison for college. London for Master’s. Chicago for public-relations career. Urbana-Champaign for PhD. Queens, New York, for activism and living out a chosen life.

Neither Pauline nor I can now remember when we first met. It might have been in 2006, three years after I moved from Singapore to New York. I have fond memories of our meetings, however. An eye-opening social hosted by NYAGRA, the New York Association of Gender Rights Advocacy, which she co-founded, and still leads, to fight for transgender rights. Appetizers at Chez Warren Wyss, the Kips Bay home of Pauline’s friend, before heading over to the Morgan Library to look at medieval illuminated manuscripts. Another group outing, again consisting of three gay boys and Pauline, to watch an Handel opera at the Met. A Klavierabend, with luncheon, at her apartment in Queens, amongst recycled furniture, an upright piano taking pride of place, on which Pauline entertained us by playing Bach and Chopin. My book party in Sunnyside. Her spectacular 50th birthday celebration in a Soho gallery where she was mobbed by friends, allies, and fans. They were often all three at once.

Pauline lives, breathes and eats activism. She is an inveterate networker, adept at building alliances, ready to flash a smile; she does not take no for an answer, neither from a friend nor a foe. Against the resistance of two successive mayors, Giuliani and Bloomberg, she led the campaign for a transgender rights law in New York City. The City Council finally passed the bill in 2002, by a 45-5 vote. It is an accomplishment that Pauline justifiably feels most proud of.  “And I have to say,” she adds in an essay, “that three years of leading a major legislative campaign taught me more about politics than five and one-half years of studying academic political science theory ever did.”

It is, however, her writing more than her activism that I have followed most closely. Pauline is a formidable polemicist. She gains her point not by body-slamming her opponents but by wielding a rapier wit. When an alcohol-soaked Mel Gibson went on an anti-Semitic rant against police officers in 2006, he met with so much public anger and displeasure that he issued not one but two apologies. In Big Queer Blog, Pauline took him to task, however, for not apologizing for homophobic remarks made years before. She asked, quite provocatively, at the beginning of the blog-post, “What’s the difference between anti-Semitism and homophobia?” and answered, “One can end your career, while the other generally gets you a pass from Hollywood and the mainstream media.”

To put yourself out there constantly, in newspapers, film and social media, requires nerves of steel. It also requires a stubborn set of values and a strong sense of self. I learned from her essay “Homeward Bound,” the one that she gave me in Hell’s Kitchen, that it took Pauline some time before she arrived at where she is. The years spent pursuing her PhD proved “pivotal,” as she puts it, in redefining her identity. In her own words:

When I finished my dissertation in December 1993, I discovered Foucault while taking a graduate seminar in political theory. Reading the work of this radical gay French theorist helped me rethink my lifelong identity complex. I had labored for years under the feeling that I was a “fake Korean,” unable to live up to the expectations of others. In light of reading Foucault and other theorists, I came to understand that my pursuit of—or flight from—Koreanness was doomed to fail from the start, since there was no essence of Koreanness to pursue. I came to see myself as having a distinct identity as a Korean adoptee—neither ethnically Korean in the way that Koreans or recent Korean immigrants are, nor Korean American in the way that U.S.-born, English-speaking Korean Americans are.

These words resonated with me. I could identify with the feeling of being a “fake.” Growing up in Singapore, even before I went to England for my university studies, I was often made to feel that I was not a real Chinese since I could not speak, read or write Mandarin fluently. In Singapore, Mandarin was so identified with being Chinese that other dialects (such as the Cantonese I speak at home, along with English) came to be seen as subcultures. An English-speaking Chinese was labeled a “banana,” yellow on the outside, white on the inside. I was no victim, however, since such insults came from a class that was losing political and economic influence to the rising English-speaking class. My experience confirmed what Pauline discovered in Foucault: there is no essence to an ethnic identity. Rather, identity is historically determined, and is contested by class and other interests.

In the same years Pauline came to accept herself as a Korean adoptee, she also came to terms with her gender identity.

I would eventually come to call myself a “male-bodied woman,” a concept radical even within the transgender community, because I reject the assumption that the presence or absence of the penis determines my status as a man or as a woman. While cross-dressers often find me too transsexual to relate to because I live full-time as a woman, transsexuals find me puzzling because I have not pursued hormone therapy or sex reassignment surgery. Even within the transgendered community, I find myself in between.

To see clearly who we are, we need to re-name ourselves. The term “male-bodied woman” probably consolidates—crystallizes?—how Pauline sees herself. If we are to look away from society’s mirror, we need language to hold up another mirror. Language, with its power of abstraction, gives us the required distance to see ourselves. Even to name our nebulous network “I” is to make visible what did not exist before. The term “male-bodied woman” does the same work. We all need to call ourselves into being.

One person’s changed self-perception can transform the self-perception of others. Pauline, in her essay, wrote of her excitement at the first international gathering of first-generation Korean adoptees in Washington D. C., in September 2001.

Being at a conference with more than two thousand Korean adoptees was an extraordinary experience. While a few of the attendees were initially shocked by my presence—most had never met an openly transgendered person before—they soon realized that my life story as a Korean adoptee was one that they could relate to.

So identity is not just a matter of authenticity and integrity; it is also a matter of community. After accepting her ethnic identity as a Korean adoptee, Pauline became willing and able to participate in this conference. When she entered this community, she brought with her all her other identities, including that of being a male-bodied woman. Now the community’s self-definition must shift, however slightly. The community cannot disown one with a “life story” like its own, but must come to terms with human variations on the same theme.

I was stimulated by Pauline’s words to think through a little more my confused ideas about identity. My default position had been that identity was a bad idea, was unnecessarily confining and intolerant. I was especially suspicious of national identity, with its flag-waving and five-year-plans, its armies and Olympics. Instead of wholesale opposition, perhaps a more wholesome approach was to embrace all the identities jostling in me (“I am large. I contain multitudes.”). I would like to be a poet in pragmatic Singapore, and a Singaporean in the British poetic tradition. I would like to be religious among the atheists, and gay in my family.

Not for the sake of confrontation, but for the sake of authenticity. Talk of the performance of the self leaves me cold. To be true to myself still seems an ethical imperative, and a psychological drive, even if the self is a moving target. The heart of Pauline’s essay, the place she calls home, is a passage about what her piano means to her. In the passage, she follows “authentic” in one sentence, with “fullest sense” in the next. That juxtaposition seems suggestive to me. To be true to a thing is to possess the fullest sense of the thing. That argues for an idea of authenticity more in line with plenitude and complexity, than with singularity and correctness. It is perhaps why Pauline is so inspired by Watteau’s lovers, forever going to or leaving Cythera, in a dynamic dance. A dance she re-creates each time she sits down to play her musical instrument, which has been chosen both by and for her.

I bought a piano and thereby filled my little apartment with the music of my childhood and the spirits of those since lost to me. Sometimes when I play a Bach prelude, a Schubert impromptu, or a Chopin etude from my childhood or youth, the distinction between my past and present dissolves. And when I sing one of the German hymns from the Lutheran hymnal of my childhood, I realize how much music continues to shape my search for an authentic identity. My piano represents “home” in its fullest sense. It is not simply a musical instrument—or a decorative piece of furniture; it is an instrument of self-determination in the creation of my own culture of home; it is an instrument of the art of memory, a tool to be used in the archaeology of the self.

Jee Leong Koh is the author of Steep Tea (Carcanet), named a Best Book of 2015 by UK'sFinancial Times and a Finalist by Lambda Literary Awards. He has written three other books of poems and a book of zuihitsu. Originally from Singapore, he lives in New York City, where he edits the arts blog Singapore Poetry and runs the Singapore Literature Festival in NYC.