Performer Marga Gomez has been making queer comedy for over 30 years. As one of the first out queer comedians in the nation, she’s created nine one-person (although often many character) shows, toured nationally and won the GLAAD Media Award for Off-Broadway Theater, Theater LA’s Ovation Award for “Best Featured Actress” and New York’s Hola Award for “Best Solo Performance.” As a performer, most of the shows she has created have been in some sense autobiographical. She’s now touring Lovebirds, in which she wrote and portrays six gay and straight romantically challenged characters, including an hallucinating photographer, an old school butch, a sleepy professor, and a wife thief.

Gomez recently sat down with Lambda Literary and answered questions about her writing and creative process.

Although Lovebirds is your tenth solo show, it’s your first show that isn’t autobiographical in some sense. How did the concept for this show come to you? And did you find the creative process different? You essentially transitioned from writing nonfiction to writing fiction.

Lovebirds was written to take the sting out of a long break-up. We had been living in San Francisco and everything there reminded me of us. I started to hate the Cable Cars. Rather than move away I imagined a world of men and women who also made bad choices to comic effect. Lovebirds characters were inspired by people I met on the road to love, which for me began in Greenwich Village where I came out and fell in love every week at a dyke bar called Bonnie and Clyde’s. The writing process was scary at first because I had a few storylines to create and interweave. But when my characters came to life, the rest fell into place. I found much more freedom to reveal myself moving away from autobiographical storytelling. I also became so involved in my characters I stopped pining for my ex.

Of the six characters, do you have some you like and some you dislike? Which of the characters would most want to say, take on a roadtrip? Invite to a family Thanksgiving? Have with you in a zombie apocalypse? And did you struggle with writing some of the characters more than others?

There’s a character in Lovebirds called Polaroid Philly based on a Polaroid photographer I’d see making the rounds of all the restaurants and bars downtown in the ‘70s. She was kind of a sourpuss, but my character Polaroid Philly is adorable and batty due to a fateful LSD trip. She is essentially the narrator of Lovebirds. I would take the road trip with her but not let her drive.

Was it daunting to create a show about love since it’s not exactly a new topic? What made you realize you had something to say about it? 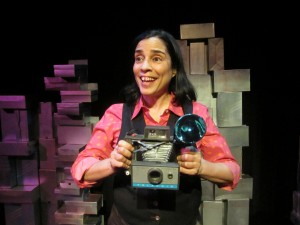 Before I knew what I had, a week before my first public workshop in San Francisco, a newbie writer asked me what Lovebirds was about. I said, “Love.” He rolled his eyes and said, “Isn’t everything?” So now when people ask me that question I tell them “It’s about Polaroids.” The title of my show is just ironic. I spoke to a bird store owner who won’t carry lovebirds because they can be very mean. I don’t claim to know much about love. But I’ve become an expert on longing.

One of the things I really admire about our early LGBT comics, our pioneers, is that they’re still pioneering. A friend asked me, jokingly, when I was going to host the Lammys and I said, quite seriously, “Kate Clinton is going to be the host of the Lammys until she is 97 years old” and that’s not a slam: I love and admire Kate. And Westenhoefer, she performed in Provincetown in October after she had what, torn her hamstring off her pelvic bone? We’re talking some tough folks. And you’ve been doing this a long time, thirty years. Okay, it’s not like working in a coal mine, but this can be some difficult shit. What keeps you going? What are the most difficult parts of this writing/performing life–is it flyering in Ptown? I hate flyering in Ptown. And what is the most rewarding? What would take for you to quit? Are you still having fun?

I was one of the first out queer comedians in the nation. That is true. Though well-intentioned, the term “pioneer” makes me cringe. Pioneers showed up in covered wagons and stole land from brown people. I’d rather be referred to as a lesbian comedy astronaut. This work is fun as long as I’m fresh. When you are a band from the 50s you can cash in on nostalgia even if you can’t hit the notes. All of us comics who started in the 80s and are still getting booked have to develop new material same as ever. What keeps me going is same as ever–I need attention. What would it take for me to quit? A sugar mama.

You describe yourself as both a romantic and an obsessive. How do those traits influence your creative process?

When I am working on something, new ideas rush through my head at all times. I don’t sleep much until opening night. Because I dream the show. It’s physically rough. But I am in love with theater and the audience who buy tickets for plays and want to be challenged. When the audience stays after the show to talk to me I am so moved that I want to take them home. But I live in a studio apartment.

You did some crowd-funding to support the show, also for the first time. Besides saving your credit cards were there any other benefits from the crowd-funding process? Was there anything surprising about it or anything you learned about your work or the process?

Crowd-funding for Lovebirds made everything possible. I was able to pay a director and team of designers before opening night. It was still a fraction of what they should get. But a lot of people wanted Lovebirds to make it. So I don’t see this as a one person show but as a community effort. The donations encouraged me to aim higher in my writing and performance. Until I did this campaign I never realized the kind of support out there for me.

For 100 bucks donation to your Indiegogo campaign you offered the following premium: “Marga Gomez will kiss you on the lips for at least three seconds, no tongue. Includes photo, posting okay. San Francisco only. You must come to San Francisco to redeem your perk. Please don’t be skeevy.” It looks like someone took you up on that offer. I’m somewhat alarmed that you had to qualify with “no tongue” but I’m guessing this was based on some experience. How was that for you? Did you have to further qualify skeevy?

The woman who bought that premium is a fantastic photographer in New York. She bought the $100 kiss on day one of my Indiegogo campaign. I was surprised because as far as I knew she is straight and I killed all her houseplants in the 1990s. I think I owe her tongue just for that. I’ll be paying up soon I hope.

Lovebirds opens June 6th in New York at the Club at LaMaMa and runs through June 15th. Visit Margagomez.com or www.lamama.org for more information.

'Adaptation' by Malindo Lo
'The Dream of Doctor Bantam' by Jeanne Thornton
'Butch Lesbians of the 50s, 60s, and 70s Coloring Book' Edited by Avery Cassell and John Macy