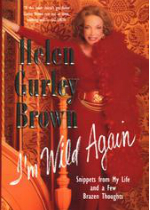 When Helen Gurley Brown was actually run out of town, her stock as a gay icon soared in my book. In the early aughts, I got to know Helen when I was her publicist—at St. Martin’s Press—for her penultimate book I’m Wild Again: Snippets From My Life and a Few Brazen Thoughts. She was an infinitely read-out-loud-on-the-beach-quotable original in the vein of fashion legend Diana Vreeland and movie star Joan Crawford. A hero for women? Sure. Gay icon? Absolutely. Think about it. She was an outsider who made it in the big city, and like a gay man, her identity (at least the public one) was based on a sexuality that was often difficult to stomach for America. “Sex is one of the three best things there are, and I don’t know what the other two are.” Amen.

The original Carrie Bradshaw, she shocked an America that still deemed itself innocent when she wrote the book Sex and the Single Girl in 1961, brazenly going where no gal had gone before. She declared that not only were single girls having sex, but that they should be having fun while they were at it. For three decades at the helm of Cosmopolitan she advocated for single, straight women what is considered essentially the lifestyle of many gay men: looking your fittest and chicest while enjoying as much sex as possible. . . sans apologies. “One of the paramount reasons for staying attractive is so you can have somebody to go to bed with.”

At 78, when I’m Wild Again was published in 2000, she had one more little shocker in her Chanel bag of sexual whoop-ti-dos. She wrote about being a kept woman – the mistress of her married boss back in her working girl days, long before Sex and the Single Girl and Cosmo. Would anyone care? After all, this was the 21st Century. The media did care, and so did the Junior League of Richmond, Virginia.

For over a decade, I’d met once a year with the Junior League of Richmond Book and Author committee as they made their rounds to publishers in search of stellar authors for their annual gala fundraising dinner. It was a committee of three women: the chair and co-chair (women of about 35 – different women every year) and the chaperone (the same silver-haired, blue-eyed sustaining member of a stratospheric age). Her job was to smile and nod and intermittently say, “My, but you have some mighty interesting books,” and I suppose to make sure the chickadees didn’t stray. They never chose any of the authors I suggested until Helen.

I leaned across my desk. “Yes we do,” my eyes sparkling. Like a magician, I produced a fresh copy of I’m Wild Again from under my desk and handed it to her.

“Oh!” all three gasped as they gazed in wonder at Helen standing at the bottom of her penthouse apartment staircase, triumphant and age-defying on the cover in a Moulin Rouge red gown with a matching feather boa.

“I can tell you right now that we would be honored to have her,” the chair said without reservation.

I called Helen that afternoon, and once I told her that the event would move cartons of books, she was on board.

Two days later the chair called me from the safety of what I imagined to be her Greek revival house in Richmond. I started to share the good news that Helen had accepted her invitation, but she cut me off.

“Now I hope you didn’t go to too much trouble, but I don’t think she’s going to be a good fit.”

“I read her book on the plane ride home. It’s a little bit… uh… well racy for our audience.”

Racy was said in a stage whisper the way some people say cancer.

“I’m afraid not. I don’t think our group is ready for some of the topics she covers.”

There were some peculiar snippets in there. Like the bit about how she and her sister, at grammar school age, used to get mildly titillated (“but not about each other”) while perusing the medical equipment offered in the Sears Roebuck’s catalog – enemas, high colonics, bedpans. There was also her recommendation of Crisco, not the way gay men might use it, but as a bargain moisturizer.

It was the kept woman bomb.

“But aren’t you all kept women with merely a piece of paper and a twelve-place setting of  fine bone China to make it legit?” I wanted to ask. Were they so blinded by the celebrity of her name, that they forgot what it was based upon?

“Well, I already did ask Mrs. Brown, and she accepted. Happily, I might add. She will be so disappointed.”

Helen, she was disappointed, even a little hurt.

I pointed out the humor in the situation since Liz Smith’s tongue-in-cheek prediction kind of came true. Liz, the syndicated gossip columnist and a long-time friend of Helen’s, endorsed I’m Wild Again with the prophetic words: “If this book doesn’t get Helen Gurley Brown run out of town, nothing will!” Liz had also promised to plug the book in her column when we said go.

Liz went, and ran the item with full attribution to me. The ladies of the Jr. League of Richmond never darkened my door again. And “wild again” Helen, like so many gay men, was still too wild for most of America.

'Something in the Blood: The Untold Story of Bram Stoker, the Man Who Wrote Dracula' by David J. Ska...
'Dying Words: The AIDS Reporting of Jeff Schmalz and How it Transformed The New York Times' by Samue...
Wishing for Love and Finding Family: An Interview with Naz Kutub about The Loophole

Jamie Brickhouse is a writer, performer, and the author of the critically acclaimed Dangerous When Wet: A Memoir of Booze Sex and My Mother (St. Martin’s Press). It’s “Required Reading” in Mary Karr’s The Art of Memoir; Amazon named it a “Best Book of May 2015,” and Book Chase named it a “2015 Nonfiction Top 10.” He has been published in The New York Times, International Herald Tribune, Washington Post, The Daily Beast, Salon, Out, Amtrak’s Arrive, and the Huffington Post and is a guest blogger for POZ. Brickhouse is a two-time Moth StorySLAM champion, Literary Death Match champion, and performs stories and a solo show based on Dangerous When Wet. Follow him on Twitter @jamiebrickhouse, friend him on Facebook, or visit www.jamiebrickhouse.com.