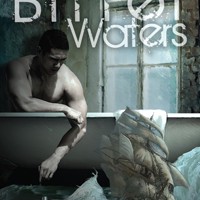 From an oeuvre of more than five hundred short stories, Lethe Press has chosen seventeen stories by Chaz Brenchley to produce Bitter Waters, Brenchley’s first collection devoted specifically to gay readers. Brenchley has written in many genres, under his own name and a pseudonym, from crime stories to urban fantasy to children’s books, and has also published essays, poetry, and even a play. One would not think it possible, but this small collection provides an excellent representation of Brenchley’s wide-ranging output, as he casts his all encompassing net far and wide—this collection contains stories that read like historical fiction or realistic fiction, fantasy, horror, and may even include elements of mystery and romance.

Despite the title and the cover copy, not all the stories feature boats, sailors, or the open water; many of them do, of course, and in the stories that do take place aboard a ship (“Another Chart of the Silences,” “Junk Male,” “Keep the Aspidochelone Afloat,” and “The Boat of Not Belonging”) Brenchley demonstrates a deep knowledge of boats, both historical and modern, and what is required to keep them running effectively, be they either a two-man yacht or a whaler. What all the stories share is at least one gay male character, and most also contain some speculative element as well (sailors, after all, are a superstitious lot), which may range from the subtle to the overt.But aside from these two commonalities, each story should be treated as a distinct and separate entity: Brenchley’s penchant for using the same names across stories (e.g., Martin, Quin, and Gerard figure prominently in this collection), do not indicate that the stories are interrelated.

In the middle of this collection is a series of five or so stories that do not refer to the sea at all, but instead contain a dead or dying character, and center around the rituals associated with death and dying:  keeping vigil while waiting for the dying to depart (“Up the Airy Mountain” and “The Light of Other Eyes”); preparing the corpse for burial (“Parting Shots”); and disposing of their effects (“The Cupboard of Cold Things”). In “The Insolence of Candles Against the Night’s Dying” Brenchley combines several of these themes: the unnamed protagonist is caring for his dying lover, while simultaneously packing up his late uncle’s possessions. His imminent loss parallels the long-ago death of his uncle’s lover, who, not surprisingly, was taken by the sea.

Whether or not the characters actually travel via ship, each story is a journey whereby they navigate love, loss, revenge, and/or some major life change (either their own or another’s); the narrator of “The Boat of Not Belonging” muses upon this metaphor:

The sea is liminal, and so is fog—and so are books. It’s only that books are more fixed, more focused.  They still constitute a marginal land, gateways and fences, boundaries to breach. A boat is a bridge, and so is a book.  It’s meant to stand between writer and reader, to bring them close to touching: to have them march in step a little way together, almost hand in hand, nothing between them but an unloved wall.  But a book is an object too, as well as a journey people take together.

With that in mind, prepare then to take journeys to worlds unimagined—to the harem of a Sultan who never was; to a land that isn’t quite ancient China; to a war-torn land of magic; to the harsh reefs of the Silences (where modern satellite technology fails); some of these places may even resemble the world we know; only some of these places can be reached by the sea. But most of all, be prepared to travel the uncharted geography of the human heart.