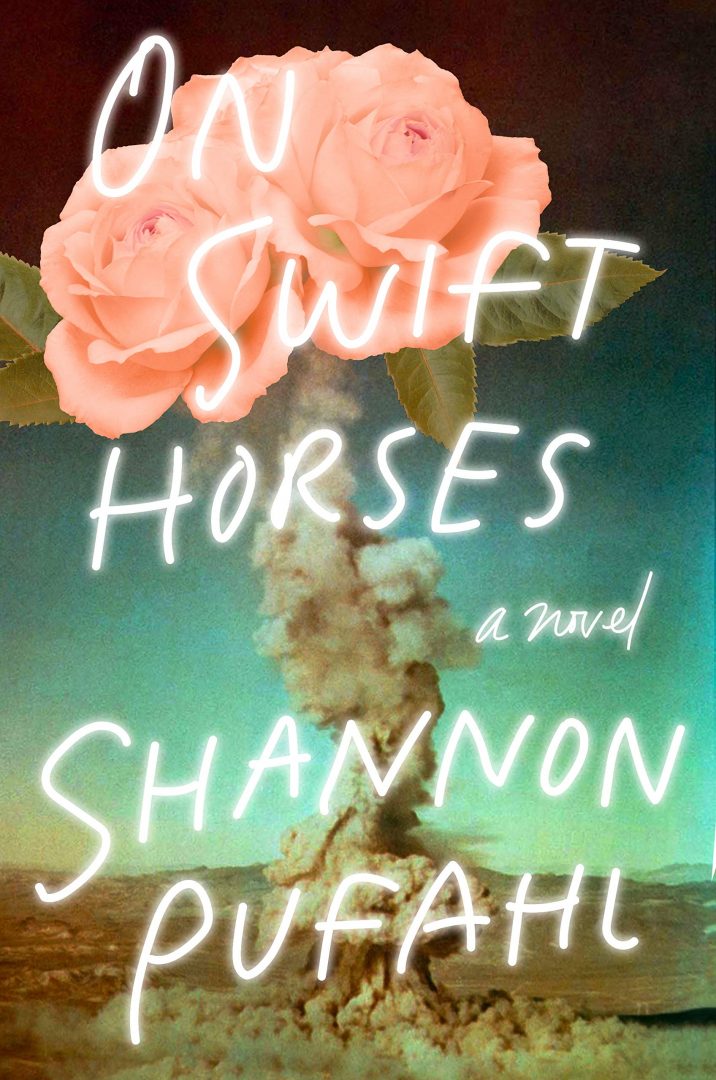 ‘On Swift Horses’ by Shannon Pufahl

‘On Swift Horses’ by Shannon Pufahl 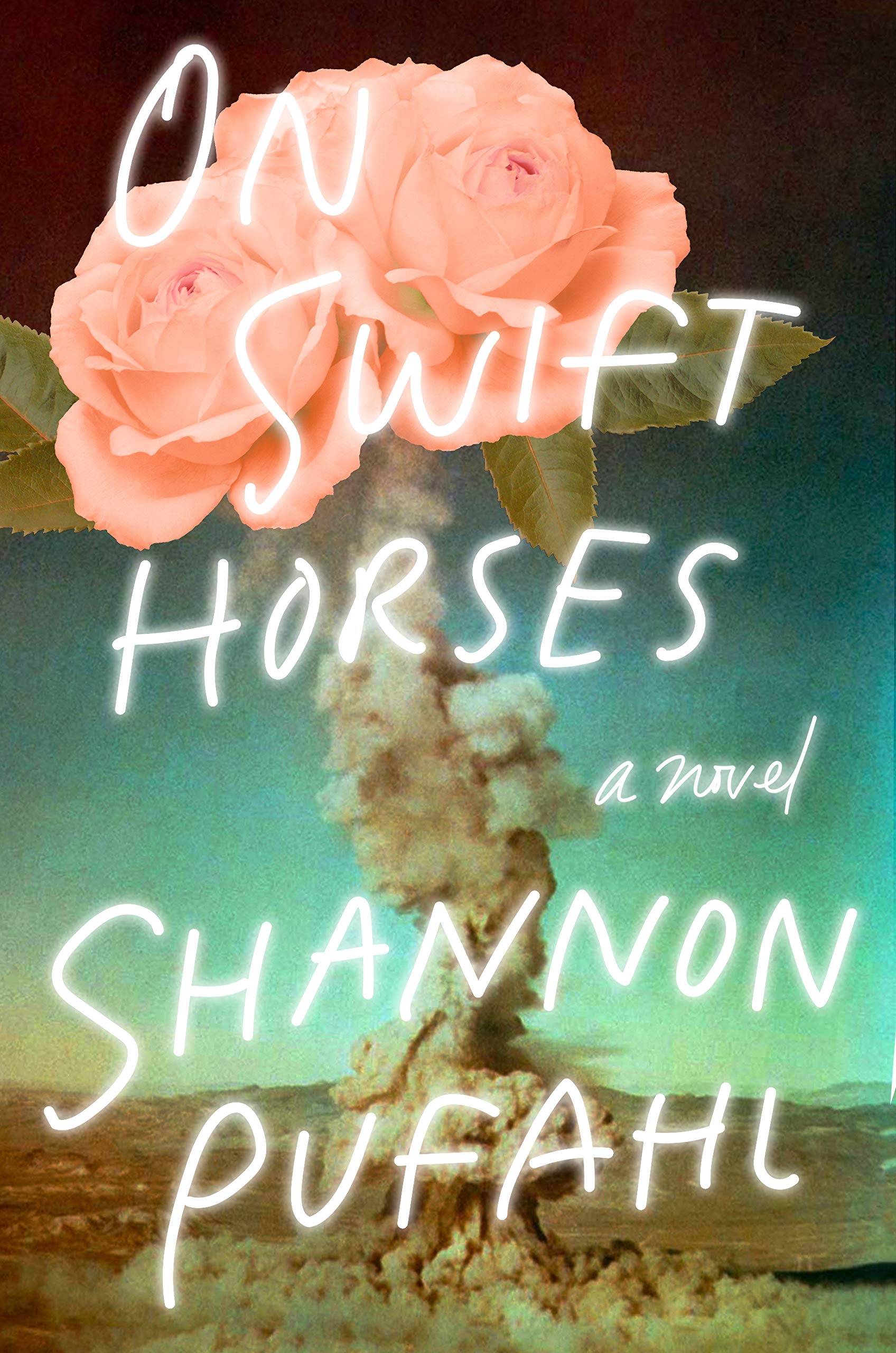 From 1951 to 1962 over a hundred above-ground atmospheric nuclear tests took place at the United States government’s Nevada Test Site. Vistas of mushroom clouds filling up the horizon just 65 miles away to the northwest were promoted as tourism by the Chamber of Commerce in Las Vegas which dubbed itself “Atomic City”.

Hundreds more bombs were being detonated underground, the grand total exceeding a thousand by 1971.

Which brings us to Shannon Pufahl’s debut novel, On Swift Horses, and its exploration of mid-century tensions in what we now might call queer lives. The year is 1956, when the post-war mindset ballooned with optimism. That year, Don Larsen would throw what remains the only post-season perfect game in a World Series, My Fair Lady opened on Broadway, and homemakers could buy one of the brand new non-stick frying pans. Ah, but underneath. Pufahl’s story follows two main characters: Muriel, a young wife from the plains of Kansas and her brother-in-law, Julius, a drifter and a grifter not long back from the Korean War.

Julian and his brother grew up hard-scrabble, trying to make up for their father’s having often given all his money to the church before he passed away. They both carry emotional scars from their times overseas, but Julius also carries a dangerous secret, one that when exposed had gotten him kicked out of the service.

Muriel grew up in the shadow of her charismatic mother who traded on her beauty with a string of suitors to make ends meet for her and her daughter. Julius enjoys Muriel, but underestimates her as just a silly little thing. For her part, Muriel feels very drawn to Julius in a way that feels like it could possibly catch fire into betrayal, but may actually be about something else.

Both are trying to make do, to get by, to settle into, but something within them, a sense of dissatisfaction, a hope for more, unnerves them. They are complicated people, but they don’t consider themselves so, they don’t want to be. Julius is very aware of his predilection for men and the dangers it carries. He’s familiar with the force within himself, something more elemental than lust alone, that drives him and others into dark alleys, empty parks and shady “hotels” that keep lookouts at the door for passing patrol cars.

Muriel loves her adoring husband, but craves more. Working at a waitress at a dive frequented by ex-jockeys and retired horse trainers from the nearby Del Mar race track, she keeps her ears open. Soon she starts wearing shades and a big hat and placing bets on the ponies. And she wins. The resulting tidy nest egg she hides from her husband behind a picture frame expands her sense of both her inner and outer possibilities.

The post-war boom created all sorts of new opportunities for many across the country, but also opened up previously unknown and potentially life-altering vistas inside the hearts of some people like Julian and Muriel. Julian finds himself falling hard for a co-worker in the stifling “peep” above the mirrored ceiling of the casino playing floor where they watch for cheats and card counters. Muriel finds herself drawn to a single woman who lives down the dusty road from the new development house she and her husband just bought. But it’s her affection and curiosity about Julian that provides the real motor for her sleuthing about the queer demimonde of the period. Julian fascinates her like a one-way mirror through which she can’t see, but she knows hides another world, a topsy-turvy one both the result of and completely contrary to the forces recreating America. Love, it turns out, may be like an atomic blast, it remakes the world, but has just as much potential to poison everything for miles around it.

Pufahl recreates the mid-century Western world with apt and wonderfully inventive detail. There is Stud Loco and Canasta, “ashes in the embroidery,” and “lank dogs in reservation colors, red and brown, with mismatched eyes.” There’s Mexican food and jars of olives, perfectas and exactas, hot-walkers, and horses named Gingersnap, “punkish winds,” and a few too many “contrails” dividing blue skies into halves.

A taste of some of the evocative writing: “Love was always somewhere outside oneself, it was always improbable [….]” and “[….] It occurs to him for the first time that there might be as many kinds of women as there are birds or men or wind.”

“Residential districts” are “scattered out like henpeck to the east and west.” We hear the “effusive, sudden talk of country people” and “the dead sound of his boots on the porch.” A “sliver of soap” is described “as blue and useless as skim milk” and a lambskin condom is “both weighty and soft, like an elbow glove”.

The dialogue in On Swift Horses rings with idiosyncratic syntax and is full of personality, wit, and surprising moments of found transcendence. A bar stool philosopher muses upon the particular ironies of the cultural moment saying “A whole great majority of Americans has never heard of fairies or reds until McCarthy and Cohn got them in the craw. And now everyone has to wonder if they’ve met one.” More to the point, they may have to wonder if they are one themselves, or if they are and know it, if they are brave enough to continue being one into tonight and through tomorrow and on towards a very uncertain future. Towards the explosive possibilities of love.

The beauty of a horse race is memorably described in On Swift Horses as being “like a sunset, but faster”. In this taut and deeply-felt novel, Pufahl’s pioneers of sexual identity are blossoming like a sunrise, but slower.

'Waycaller' by D.J. McPhee
'Madre and I' by Guillermo Reyes
'Appetite' by Aaron Smith