Sitting in a circle of chairs and couches surrounding a hodgepodge of rugs, a kind hopeful anxiety permeated the space as TC Tolbert, feminist poet and teacher, welcomed participants to the first ever Trans and Genderqueer Poetry Symposium, held May 9-12, 2013 in Tucson, AZ.

As participants introduced themselves, it became clear that as narrow as the idea one might assume trans and genderqueer poetry and poetics to be, the work of those present was as wide-ranging and inclusive as any group might hope to for. Participant Dane Slutsky noted, “I was most impressed that the weekend wasn’t limited to people who identify as genderqueer or trans.”

Conceived of following completion of Troubling the Line: Trans and Genderqueer Poetry and Poetics (Nightboat Books), edited by TC Tolbert and Tim Trace Peterson, Tolbert began working on an event imagined as an opportunity for absolutely anyone interested in discussing trans poetry and poetics to simply get into a room together to talk. And talk, we did.

Over the course of the four-day symposium, community and conversation—the genuine sharing of thoughts and concerns, intellectual dialogue pushing into spiritual realms—remained central to the event. It’s nearly impossible to say which workshops were the highlights. Each and every one was well-attended and received rave reviews from participants who, in the space of two days, were offered opportunities to experience the relationship between movement and poetry, discuss the relevance of liminality to trans and genderqueer poetry, engage with ekphrastic exercises, consider the transpoetics of Emily Dickinson’s work, contemplate notions of absence with respect to critical race theory and poetry, and experiment with (soma)tic poetry praxis.

Two artist talks and art exhibitions by Rae Strozzo underscored the transmodal nature of the conference, offering an intertextual presentation of art.

Yet, as magnificent as the workshops and artist’s talks were, the poetry readings stand as the magical centerpieces of the weekend. On both Friday and Saturday night, poets and their introducers ascended a ladder and read from the rooftop at Casa Libre, overlooking the courtyard audience. Light from pool and hot tub below, a lamp and occasional shooting star above, added an uncommonly ethereal quality to the space as audiences sitting around, (and occasionally wading in) the pool, were presented with a brilliant range of poetry and performative voices.

Moving in and among contemplative considerations by the likes of Sam Ace, Joy Ladin, and Dawn Lundy Martin, to the ludic urgency of Hannah Ensor, D’Lo and CA Conrad, to the ethereal tracings of Ian Ellesante, Rocket and TC Tolbert, the readings presented what might best be described as vast consciousness. Entertaining, sure, but even more, they stood collectively as an aperture, a gap through which we might all catch a glimpse of the ways that we can employ language to grapple with gender in an imagined future. 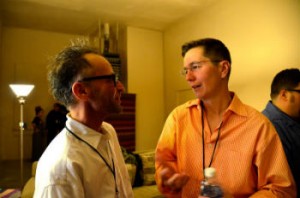 It’s clear that when Tolbert and Kristin Nelson, Executive Director of Casa Libre began working on the event, in collaboration with the Board of Directors of Casa Libre, with funding and support by The University of Arizona Poetry Center and the Tucson Pima Arts Council, they were thinking no further than the first weekend of June 2013. They worked toward an ideal and simply hoped that someone would show up.

On the last day, just prior to the final reflection, among rumors of when and where folks might organize the second Trans and Genderqueer Poetry Symposium, I asked TC how s/he felt about the weekend, about the reality of it having been such a clear success. Settled in a small circle, among friends and colleagues, new and old, TC exhaled and flashed an electric signature smile. “I feel like this is just the beginning.” All those who were there, wished they had been there, want to be there in the future, are hoping TC’s right.

On the Death of a Feminist Mentor: Remembering Ann Snitow
Blacklight: Richard Stevenson’s 'Why Stop at Vengeance?': A Fast-Paced Thriller Uncovers Evangelical...
'Lena' by Cassie Pruyn

Ames Hawkins, an Associate Professor at Columbia College Chicago, is a transgenre writer and art activist whose most recent publications appear in Interdisciplinary Humanities, Polari, Water~Stone Review, and Resilience: Stories, Poems, Essays, Words for GLBT Teens. She is curator and co-editor of 25 for 25: An Anthology of Works by 25 Outstanding Contemporary LGTB Authors and Those They Inspired. Her essay, “Optickal Allusion,” was selected by Robert Atwan as a notable essay of 2011.