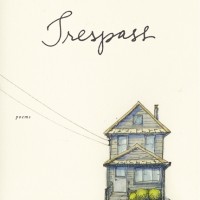 Thomas Dooley’s Trespass (Harper Perennial) is a winter book–the text of these lean poems like stark tracks over blank fields of a Glückian emotional reserve. As in Louise Glück’s work, the hell is domestic, and there is something equally astringent about Dooley’s touch, yet underneath the scalpel is something wounded and lush. In parsing a psychology of familial trauma and repression, Trespass leaves not the tracks of a wounded animal, but of a clever and deliberate scavenger.

In sparely clipped manipulations of the unsaid and implied–the emotional climate is Dante’s deep freeze, not his fiery inferno levels, of sins at last named–rage, despair, and lust are sublimated, as in the oblique ars poetica “Transference,” where the speaker’s father haltingly acknowledges his son’s homosexuality:

I thought you can’t even
say it and I squeezed
a pair of pliers in my hand
[…]
I instructed the actor
playing a waiter
how to wring
the grinder, crack
whole corns
to coarse pepper.

The speaker’s finds his angst at a double remove, transferred into the fingers’ clench, then into his stage directions where it becomes another degree metaphorical, metaphor itself only implied such that at last the only remaining “heat” is that of the pepper: inert, untasted, utilitarian.

I want to solder
the fragile things, pour
liquid alloy into me or

With its suave physicality Trespass is always on the verge of exiting metaphor altogether: its syntax shorn down to essential gestures of coherence, the work is bitingly narrative because Dooley has a particular, heartbreaking family story to relate, of children abused, of the traumatized adults who find themselves in closets both metaphorical and literal, until ordinary phrases (“this / is a closet for tall and small things”) take on a terrible contextual resonance. Thus Trespass rewards–with deepening devastation–multiple readings.

Obsessive imagery of  fingertips illumines with awful suggestiveness the theme of sexual trespass, and the architectural cohesion of the collection  makes for effective dialogue between poems, as if these were all facets of one bleak significance: “her eyes/I will name blue, her blue/ eyes, those glassy/empty rooms” (“Picnic, 1988″) speaks to the remembered rooms of the house on Ingalls Avenue, which in “Selling the House: Ingalls Avenue,” find themselves “in a house with rooms/and closets that never knew to be/unlived in, for this moment maybe/ a relief to be empty.”

fingertips treading to a clasp
sliding a hook from its eye

– which serve as symbols, like the rinsed cruets in the speaker’s father’s childhood sacristy, for the unspoken.

Yet this Northeastern reserve is giving way to a thaw. As “the late sun sets/ fire to brass buttons,” the lyrics so vastly encompassed in whiteness are shaking off their frostbitten paralysis. Every numbed thing wants to break out; even “neat wheels of hay” quickly glimpsed through a car window suggest a tightly bound impulse for escape.

The constrained dances of alienation and avoidance make their own cat’s cradle:

I want
to see the lines
you make
on the map of the city,
if they cross the lines
I make, do we
create a pattern
unknowingly
(“Separation,” X)

“There’s a certain slant of light/Winter afternoons/that oppresses, like the heft/of cathedral tunes,” in Dooley’s vision of a speaker haunted by formative religious and familial experience, but shimmering, cyclical reflexes of the natural world overtake any churchyard dolor:

A bed too short,
our feet slide out

and cup the brass
footboard, cool

in our concaves, what
my father would do

to find us: curled
fiddleheads, one

metallic on pond
our bodies’

edges imbricate, in
the morning we

divide and in a year
we separate.

We are reminded that the other common definition of sublimation is the passing away of a solid–here perhaps one of a long-hefted emotional weight–into vapor.

“I know violin strings,” Dooley begins a finely spun elegy for Tyler Clementi, and as testified by these expertly fingered notes of Trespass, he does. Yet Trespass maintains its sense of play in the midst of its tug of war between seasons, giving our heartstrings a playful pluck at unexpected moments: “Knowing you are browsing/ cheap Swedish furniture/ makes me feel,/ sturdier?” (“Separation, III”).

Dooley employs an impressively forensic eye in delineating his family narrative. To detail that narrative would be to deprive the reader the pleasure of the poems’ thousand small cuts, whose craft is such that the achievement of Trespass is to embody the final, and most rare, definition of sublimation: a purification or refinement; an ennoblement.

Dooley’s father is told: “There have been some accusations against you.” But Trespass is no litany of accusation–it’s a chillier, more brilliant refinement of trauma, so that these lean lyrics, page after page in that trespassed house, are exquisitely wrought keyholes through which the reader can view–never all at once, only in shocking glimpses–devastation as unspeakable, unmetaphored fact.

'One Hundred Days of Rain' by Carellin Brooks
'The Fletcher' by K. Aten
'Meet Me There: Normal Sex & Home in three days. Don’t wash.' by Samuel Ace