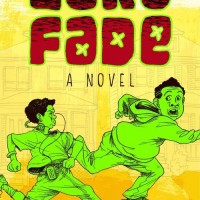 Thirteen-year old Kevin wants to be a zero fade: the guy with a haircut done with clippers set to zero to insure an extremely close cut on the sides, with longer hair on the top; someone with sex appeal. The right haircut will correct so much of what is wrong in his life. He’ll be able to get a girlfriend. Those guys in school will have to stop referring to his “mushy tushy” and calling him “gay”.

“Being gay is the worst thing possible. Being gay is fighting bad, sucking at sports, not getting girls, wearing hand-me-downs from forever ago, doing good in class, and looking at other dudes in the locker room.” All things, Kevin admits, he has done (except for the good grades), but only gay guys “let it happen.”

When a botched home haircut results in a verbal fight with his mother, Kevin is put on punishment for the week. Then is surprised when his mother arranges for him to go to the barbershop. But, the barber seems . . . effeminate. Will letting this guy give him a fade make him look even more gay? And why is his ultra-cool Uncle Paul acting so friendly towards the barber?

Zero Fade centers on the transformational experiences of a young black male over a period of nine days. Terry adventurously constructs an urban microcosmic slice of life story using Kevin’s highly emotional and volatile first-person voice, as well as judiciously inserted third person narratives by his adult gay uncle Paul. Rarely are such distinctive age-disparate perspectives melded so well together.

An interesting theme in this first novel is the concept of whether family “secrets” are lies, and how distinguishing between the two connect to maturity and time. Kevin’s homophobia is at least partially a product of his culture and peer influence. Terry directly relates how the use of the term “gay” is used by adolescents to bully, insult, and denigrates others. Yet, he also provides the counterpoint of Paul’s experiences as a gay man, learning to accept himself and his need to demand honesty in his life, e.g., that he no longer wants to hide who he truly is.

Even more outstanding is Terry’s ability to create characters, male and female, with which most readers will find some identification. Kevin’s mother, Sheila, as seen through her child’s and brother’s eyes, is striking as a single mother, struggling to not only survive but thrive. His fifteen-year old sister Laura’s personality fluctuations are clearly influenced by typical peer-related pressures: the need to be accepted, loved, noticed. While the teenagers’ voices ring true, the adults’ voices do as well, with the prudent use of age-appropriate references.

In addition to an MFA, Terry has considerable writing and editing credits. His facility and adeptness with language and grammar have produced an imminently readable and enjoyable story. Although the beginning is rather slow, Terry avoids becoming pedantic, allowing the action in the novel to set a comfortable pace. Flashbacks are used to develop and establish the relationships the two voices have with others. The setting and description are sparsely presented, yet have a feeling of realness. Readers will smell the sweaty locker room, acrid chemical smells of the science lab, and the warming scents of Kevin’s mother’s kitchen. Even the stringent cleanliness of Kevin’s best friend’s home may stir up memories.

As each character makes choices and takes actions, their interconnectedness explains their changes within the compact time frame. As a result, Zero Fade is a gritty, down to earth novel with a satisfying ending. While the age recommendation for this novel is grade six and above, adults will find this novel entertaining and may even learn something new.