‘Queerly Remembered: Rhetorics for Representing the GLBTQ Past’ by Thomas R. Dunn

‘Queerly Remembered: Rhetorics for Representing the GLBTQ Past’ by Thomas R. Dunn 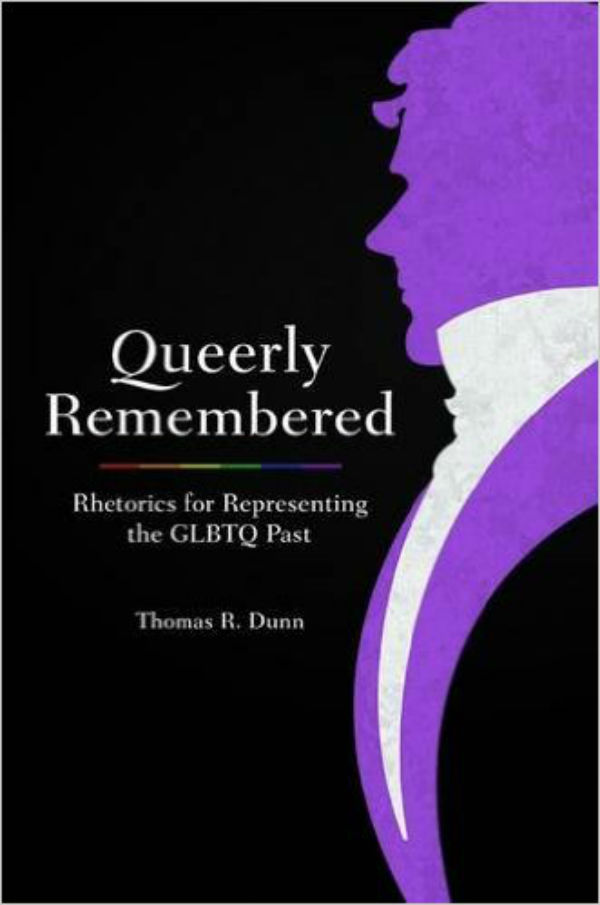 The AIDS crisis in the United States served as the impetus for LGBT individuals, communities, and organizations to collect and preserve their histories. At first, the reason to compile these experiences and artifacts was to commemorate the dead and dying, as well as to provide future generations of LGBT youth gateways to their heritage. The Internet age, combined with the continued struggle for LGBT visibility and civil rights in cisgender heterosexual society, made LGBT individuals and communities rethink the way that they communicated their existence. In Queerly Remembered: Rhetorics for Representing the GLBTQ Past, Thomas R. Dunn explains how gay, lesbian, bisexual, transgender, and queer individuals and communities over time have turned to publicizing their pasts to advocate for political, social, and cultural change.

At the time of this writing, Dunn is an assistant professor of Rhetorical Studies at Colorado State University Fort Collins. His research focuses on the intersection of GLBTQ culture, politics, and rhetoric. Queerly Remembered: Rhetorics for Representing the GLBTQ Past is his first book, part of the Studies in Rhetoric Communication series published by the University of South Carolina. Queerly Remembered is an updated version of his doctoral dissertation “Queerly remembered: tactical and strategic rhetorics for representing the GLBTQ past,” which won the National Communication Association’s Gerald R. Miller Outstanding Doctoral Dissertation Award in 2012, the National Communication Association’s Stephen E. Lucas Debut Publication Award, and the 2011 Critical/Cultural Studies Division Outstanding Dissertation Award. This three-time award winning dissertation made for excellent, engaging reading.

In Queerly Remembered, Dunn demonstrates the “turn to public memory” through a series of case studies depicting the political and rhetorical actions taken by marginalized, sometimes erased, communities. According to his research, LGBT communities depend more heavily on communicating memories rather than histories when sharing their experiences with a broad public audience; Dunn explains the difference between “history” and “memory” as such:

Public memories are “multiple, diverse, mutable, and competing accounts of the past” debated in the public sphere with implications for how we conceive our present and future. My scholarship focuses on memories rather than histories because, unlike traditional academic histories, memories extend the array of subjects capable of articulating pasts beyond elites and institutions with public authority, highlight how GLBT and heterosexual pasts are inflected differently by interacting issues of race, gender, and class, embrace more creative, fictional, ephemeral, and non-textual sources, and make central the discursive and changeable representations of the past.

In today’s intersectional, multicultural society, the strategy to interrupt and dismantle binary systems over shared experiences helps to break down systems of oppression. One individual or community’s memory of an event, an experience, a person, or a place has as much validity as evidence to support a cause as anyone else’s. The vehicles that generate the sharing of memories are often artifacts—particularly artifacts created by the community itself. Dunn’s book focuses on the growing number of LGBT-focused archives and museums, monuments, gravestones, and public performances of pride, protest, or mourning created by the LGBT community to establish the permanence of LGBT existence in history while serving as catalysts for the sharing of stories with the cisgender heterosexual public. The most significant example of such, noted by series editor Thomas W. Benson in the book’s preface, is the Stonewall National Monument. While President Barack Obama officially designated Stonewall as the first official National Park landmark to recognize the LGBT community’s existence in U.S. history, the LGBT community had already seen Stonewall as a sacred space for decades. The generation of stories and photos from this place, as well as the actual Stonewall protest itself, became legitimized in the eyes of the nation due to the massive record of memories associated with this place. In Queerly Remembered, Dunn also demonstrates how the same pattern emerged around a statue of the Canadian historical figure Alexander Wood, Matthew Shepard the young man and murder victim, K-12 textbooks of LGBT history used in California public schools, and the gravestones of diverse LGBT people.

As the fight for LGBT civil rights continues around the world, I believe that we should turn to Dunn’s work for inspiration and new strategies to make our voices heard. Queerly Remembered belongs on the shelves of all large academic and public libraries. If you are an LGBT community activist, historian, or curator, it belongs on your shelf, too.

'Anatomy of a Girl Gang' by Ashley Little
'Fair Play' by Tove Jansson
'Oscar of Between: A Memoir of Identity and Ideas' by Betsy Warland