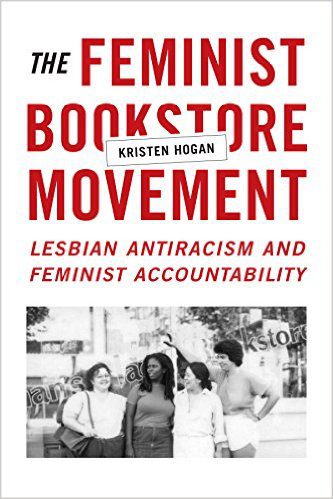 “With this book, I hope to restore to public feminist memory the radical work of bookwomen in the 1970s, 1980s, and 1990s.” And this is what Kristen Hogan does in The Feminist Bookstore Movement: Lesbian Antiracism and Feminist Accountability. I was part of Charis Books in Atlanta for most of the eighties, so I’m one of these “bookwomen” that Hogan writes about. My store isn’t part of this book’s study, but nevertheless the work we did at Charis, the work that is still done there, is well-represented in Hogan’s writing.

This history is arranged in mostly chronological chapters but woven throughout is the rise of “The Feminist Bookstore News,” a newsletter that was Carol Seajay’s love offering to all of us bookstores. It connected us. When the newsletter would arrive in our store, we’d fight over who got it first, we’d mark it up to know what to order, we’d discuss our take on the issues presented. Hogan uses the newsletter’s growth and the way it adapts and changes as a structural spine for her book.

The chapters have such striking titles. In “Dykes with a Vision,” Hogan tells the origin stories of a few bookstores. “Revolutionaries in a Capitalist System” includes the development of feminist bookstores as “movement spaces sustaining feminist knowledge” and how we used the collective power of what had become over a hundred feminist bookstores to influence mainstream publishers. “Accountable to Each Other” hones in on the work at two specific bookstores in regards to lesbian antiracism. The chapter “Economics and Antiracist Alliances” covers a time period when large corporate forces are squeezing the book industry, and attention at some bookstores turns away from anti-racist accountability and a movement-based purpose. Instead, economic survival becomes central.

Hogan’s chapter “The Feminist Shelf” was thrilling to me. She created this term to describe bookwomens’ “complex practice of using spatial organization, programming, and reflection to map shelf sections as ways of relating to each other, as feminist love: to change reading and relational practices by creating new contexts for each text and for ourselves through the books on the shelf or the list [. . .] ”

Yes, that’s what we did, and I like that now I have a name for it—”The Feminist Shelf.” I’d chose which books to put on that “prime real estate” bookcase by the front door based on a mixture of what would make our diverse range of customers feel welcome and what I thought people “should” be reading, along with a sprinkle of more mainstream bestsellers to rack up enough sales that week to whittle down the accounts payable. We’d organize programs and readings at the store to reflect our community’s values and interests. When we created and distributed those long annotated, always changing (remember, we typed and retyped them, no cut and paste editing) lists of books in our various sections—sexual abuse, antiracist/antisexist children’s books, Native American Studies, Women’s Spirituality, Black Studies, New Lesbian Romances, Women’s Sexuality—and when we discussed and fussed over the implications of the titles we gave these sections and asked other bookstores how they decided, we were enacting a transnational “feminist ethics of dialogue” through “events, narrative signs, and newsletters.”

Hogan describes all the work we bookwomen did in our stores to create a physical space and arrange physical objects in ways that supported, promoted, and defined the causes and issues that were important to us. She also describes us as the “working class” segment of this movement as compared to authors and publishers. I agree. We were the worker bees. The sheer hours of our labor were the backbone of a store’s existence and by extension a feminist publisher’s existence, a lesbian journal’s survival, an author’s readership. Hogan writes with clarity and compassion about the many struggles for accountability among collective members and owners and communities of bookstores. She doesn’t say that, quite often, these intense dialogues took place among people who had just worked their sixty-fifth hour of the week or had spent the morning lifting hundreds of pounds of books or whose eyes were blurred from posting invoices.

The bookstores Hogan specifically writes about, all those bookstores, are mostly gone. Many of the women, primarily lesbians, who ran them still do political work, but in other contexts. In the book’s epilogue, Hogan says, ” I read the stories in the preceding chapters of disagreements, lockouts, boycotts, and closures as not discouragements but indications of relationships, however fraught, where transformative conversations were happening.” She uses the past tense, but there are bookstores that still exist, such as Charis in Atlanta and Wild Iris in Gainesville, Florida where the model of “movement places” and “anti-racist activism” has always held and still holds true.

'But This Is Different' by Mary Walker Baron
Halsey's Poetry is as Raw and Honest as Her Music
'The Aversive Clause' by B.C. Edwards