‘The Missing Ink: The Lost Art of Handwriting’ by Philip Hensher

‘The Missing Ink: The Lost Art of Handwriting’ by Philip Hensher 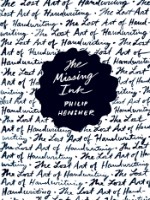 The Missing Ink by Philip Hensher is more than just a history of handwriting. It’s a history of handwriting and writing implements, a history of education and graphology and a look at how handwriting has figured in the work and life of literary figures such as Dickens and Proust. And because it is all of these things—and more!—The Missing Ink is a whirlwind tour of Europe and America, the eighteenth, nineteenth and twentieth centuries, science and pseudo-science, the elementary schoolroom and literary criticism. That Hensher manages all this concisely, in under 300 pages, branding every page with the same top-notch prose he uses to fill his many novels, is a testament to his virtuosity.

With this book of nonfiction, Hensher demonstrates how handwriting, like all things, is political. As a gay man, Hensher is ultra-sensitive to the ways in which the various schools of thought about how best to teach handwriting have been, at their core, “exercises in control and punitive discipline”—nationalistic, moralistic exercises which sometimes even resorted to the quackery of hand-restricting devices. Robert Schumman’s career as pianist was derailed by just such a device. “There must have been many more,” Hensher surmises, “whose ability to write was actually damaged by such horrible devices … just as endless Edwardian women found their internal organs mashed into each other by the stays and corsets of the period.” Hensher is sensitive to social isolation, too, whether it stems from sexuality, from class differences or from level of education. He writes:

Not just the act of writing, but styles of writing, act as little-bombs in Dickens, often connected to self-improvement and ultimate social isolation. When young Pip, in Great Expectations, writes his first letter to his brother-in-law Joe on a slate, he is starting on a path that will threaten to separate them forever. ‘mi dEr JO i opE U r krWite wEll …

The Missing Ink is also very obviously the product of a gay man in its in-your-face forthrightness—“Spotting psychological tendencies which you know about anyway in the handwriting of famous people is, I have to say, the occupation of idiots”—in its wit—“Someone who uses the Greek E probably had an early homosexual experience”—and in some of its diva-worshipping descriptions of its would-be hero:

If this book has a hero, it’s the proponent of child-centered art and writing, Marion Richardson. She was primarily a teacher of art, and fascinated by children’s art years before the avant garde turned it into a cult object. She must have been a woman of extraordinary energy and originality of mind.

Later, the author goes so far as to tell us Richardson was “a solid, plain-looking, intelligent woman: Klee would have loved her.”

Hensher, a writer of novels that have often passed the 500-page mark, limits himself in The Missing Ink to short chapters interspersed with interviews he seems to have conducted himself, sometimes in public places, sometimes with other gay men. When one of his subjects veers off the subject of handwriting, exclaiming “What a waste,” Hensher asks “What?” and the interviewee responds, “Did you see that straight guy?”

But perhaps The Missing Ink is gayest in its interest in obscure aesthetic pursuits, which are often the result of a gay man’s exclusion from more popular pursuits, like sports, like proms or bullying. Who else would come to the conclusion, for instance, that the printing font sans serif

belongs to that rare historical moment when simplification and the shedding of the inessential led, not to anonymity, but to a richer and more resonant character

The early twentieth century was full of such moments, from Hemingway’s stripped-back prose to the house by Walter Gropius un Vienna that the Emperor complained ‘had no eyebrows.’

Indeed, The Missing Ink, is very much concerned with the loss of individuality and character—a sad phenomenon that has been brought about by, among other things, the dominance of the keyboard. And The Missing Link is equally as concerned with the loss of individuals as it is with the loss of handwriting, and in this way it is informed by the age of AIDS. Hensher begins on a note of lamentation, telling us that he was partly inspired to write the book when he realized that he didn’t know what the handwriting of a long-time friend looked like. He comes back to that note of lamentation again and again throughout the book, sometimes angrily, sometimes wistfully, and he ends with death, telling us about a writing student who died. Hensher had this student keep a handwritten writer’s notebook. He felt compelled to see the notebooks again after her rather sudden death. This, however, did not prove easy:

The department in which I worked had created great difficulties in letting me see it at all. Administrators who never met the girl had pretended that it was locked up and could not now be unlocked. Looking at it, I could understand why it has created such nervousness in them. It frightened people who were frightened of literature, and humanity, and the texture of life.

So, in other words, handwriting, which differs from one person to another, reveals “the texture of life,” but it is increasingly a missing link—or A Missing Ink—between people, so we, sadly, have become or are becoming a society without a tactile sense.

Radiance on The Other Side of Struggle: Selected Poems of Emanuel Xavier
'You Only Get Letters from Jail' by Jodi Angel
'Bird Eating Bird' by Kristin Naca