‘Harley Loco: A Memoir of Hard Living, Hair, and Post-Punk, from the Middle East to the Lower East Side’ by Rayya Elias

‘Harley Loco: A Memoir of Hard Living, Hair, and Post-Punk, from the Middle East to the Lower East Side’ by Rayya Elias 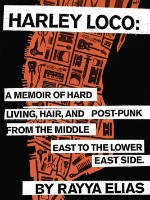 Millions of Syrian refugees have fled their homeland due to decades of civil war. While most settle in Turkey, Greece, and Lebanon, those with a little more money can travel farther from the chaos. As of May 2013, approximately 150,000 Americans identify as Syrian—a small minority, even among other Arab Americans living in the United States. Syrian immigrants have historically settled in tight-knit communities in New York, Boston, and Detroit, but wherever they’ve landed, “home” has been with family.

In unsettled times, among strange people in a foreign country, it is often difficult to adapt. Most people want to “fit in” and conform to a mainstream culture, especially when they are children. Immigrant children who do not quite “fit in” with their family, let alone their classmates, often struggle to thrive. Imagine the additional challenges that these lost immigrant children would face as LGBT individuals. Syrian immigrant Rayya Elias spells out that alienation from culture, family, and self in her memoir Harley Loco: A Memoir of Hard Living, Hair, and Post-Punk, from the Middle East to the Lower East Side.

If Rayya Elias’ brother had never lied, and caught her after she jumped from the couch, before she landed on that hard marble floor and broke both of her legs at two years old, she would have led a very different life. Not once did Elias note any remorse or pity expressed by her family over this incident; it appeared that the older brother went unpunished for this act of cruelty. Even before Elias immigrated to the United States with her family, her extended imprisonment in bed as her bones healed kept her isolated from family and her native Syrian culture. At the same time, this traumatic childhood incident planted a seed of mistrust and insecurity in family. Immigration to the United States gave Elias no safe space, as her peers viewed her as strange in almost every sphere.

Elias initially blamed her Syrian identity for not fitting in, and did all she could to reject it. In the process, she also rejected the sweet, affectionate, pigtailed little girl that she was, and became a tough girl with a crewcut. While this did not earn her the acceptance and love she desired, she did find peers who bonded through reckless acts, which included playing in punk bands and—tragically—experimenting with drugs. Elias found her calling in cutting hair; her talent—confirmed after her boss asked her for a haircut—gave her the opportunity to move to New York City and cut hair in some of the top salons. Not only did Elias make people look good, but she realized that she had the power to make people feel good as well.

Elias used drugs to escape from the pain of rejection, as well as the pain of living a lie. In spite of her rejection of Syrian heritage, Elias still felt that she needed to have a relationship with a man in order to be accepted within her family. While she eventually did have relationships with women, those relationships often centered around feeding drug addictions and running away from drug dealers and police more than enjoying honest intimacy. So many years of hard drug abuse dragged Elias into a downward spiral which rendered her an outcast once again, even among other drug abusers. A prison sentence was the first step to her slow, painful recovery, reconnecting to her family, and learning how to love herself.

Elias makes no apologies and delivers no words of wisdom. She neither paints herself as a hero or survivor that everyone should admire or pity; she simply tells the story of her life in scenes that could easily unfold on a movie screen. Her concise yet descriptive narrative—as well as the adventures she experiences on her life’s journey—would make any reader want to turn the page to find out how she ended up. One of Elias’ hairdressing clients, Elizabeth Gilbert, introduces the memoir and takes the credit for encouraging Elias to write down the life stories she would tell while doing Gilbert’s hair. Is Gilbert saying she was entertained by these stories?  The hardest part of reading Harley Loco is remembering that Elias is writing about herself, not a fictional character. These stories must have been excruciating to write, and certainly not for the titillation of a privileged few. I would like to believe that Elias wrote these stories in order to give a younger generation the opportunity to think more carefully about the choices they make in order to find family and community.

‘Love Drugged’ by James Klise
Let’s Talk About Sex: Allison, Myles, and Woolf
The Banal and the Profane: Megan Milks