The Q Factor: ‘Born to Be Brad’ by Brad Goreski with Mickey Rapkin

The Q Factor: ‘Born to Be Brad’ by Brad Goreski with Mickey Rapkin 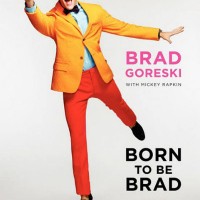 Sometime after the time of airing independent films and performing arts programs and before the time of simply airing what happens next when you give rich people in various locations across the states too much liquor, Bravo’s programming was something in between. The major focus was on professionals in the fashion, design, and entertainment fields with somewhat quirky personalities, either in competition or in their day-to-day lives. One example: Rachel Zoe, the focus of The Rachel Zoe Project.

Rachel Zoe is a stylist to the stars, which, at first sounds like an easy, frivolous job, but the series did a great job of showing how much work it entails. Stylists have to deal with high-profile clients and need both an understanding of fashion and Hollywood public relations. The show convinced me that awards show dress is not just a dress but a statement. Rachel was also perpetually dying or near death—not literally, of course, but a look would send her into figurative state of shock. It was the precursor to not being able to even.

Brad Goreski debuted along with Zoe and the rest of her team in the role of newbie assistant. Within three seasons, Brad became popular with the audience, clients, and fellow fashionistas due to his personality, skills, and quirky style; earning him a spin-off show lasting two seasons and clients of his own. Since the end of both series, Brad has continued to be a stylist and recently appeared as one of the hosts of Fashion Police on E! (during the show’s failed attempt to survive after Joan Rivers passed away) and in a fun cameo on Lisa Kudrow’s The Comeback.

Born to be Brad: My Life and Style, So Far was published to coincide with debut of his show, It’s a Brad, Brad World. (One episode in the first season focused on writing the memoir with co-writer Mickey Ripkin.) It’s no secret that the book is part of promoting the Brad, the brand. However, the book is not written with the bombast and self-importance typical of many celebrity memoirs. My cynicism was somewhat disarmed with this paragraph:

Look, I know: Age thirty-three might be a little early to be writing a memoir. I get it. I’m not Jane Fonda. (I wish.) The stories here may not be entirely unique. An overweight gay kid pursuing musical theater and obsessed with fashion? Shocker! But what we do with the information in front of us is vital. How do you get from point A to point B when the steps in between seem like such mystery?

This is a book written by two people who have read other celebrity memoirs.

It’s this kind of knowingness that charmed me to the book and also inspired this column. We as LGBTQ people, once we recognize our differences from a good portion of society, have to navigate how we are seen. Celebrities are all about being seen and negotiating their image. It’s not hard to believe LGBTQ celebrities are navigating how they are seen on multiple levels. It also inspires other questions. How does increased visibility affect people? What are their responsibilities as celebrities? I had these questions in the back of my mind as I read.

True to the introduction, Brad’s early years are common, if not relatable, to a good number of gay men. The most shocking thing to learn is that he’s Canadian. To Brad and Mickey’s credit, the first chapters don’t feel like a slog to get through.

Brad’s story gets more specific during his post-high school years. During his stint a theatre school, Brad started partying hard in Toronto. Things came to a point where he realized he was going nowhere and decided to maintain sobriety. He also realized he didn’twant to be an actor and attempted modeling. This lead to him spending time in Greece, where he met Gary Janetti, a television writer. After he’s vetted by Brad’s concerned family and friends (a similar relationship prior didn’t end well), Brad ended up living with Gary in Los Angeles. He enrolled as a freshman at Santa Monica College, taking it seriously but he still lacked direction in his life. The direction cames to him one afternoon, when Gary suggested to the fashion-minded Brad that he pursue a career in the industry.

Brad’s career began with an internship in New York City at Vogue working with the accessories. He worked hard, leading to some chance encounters and eventually allowing him to spend time on shoots. When he returned home to Los Angeles, he took advantage of his new connections, landing more work. This is an ongoing theme of the book: his hard work and luck occasionally leads to new opportunities which Brad pursues with determination. Invigorated with a focus in his life, he transferred to USC, majored in Art History and decided to become a stylist.

Eventually, Brad sets his sights on his future boss, Rachel Zoe. After having Grace Codington praise his work on a set and doing a shoot for a, then unknown, governor of Alaska, he accepted a job working for her and appearing on reality TV show. The remaining part of the book gives readers a behind the scenes look at The Rachel Zoe Project and allows him to explain why he embarked on his own, both as a stylist and a reality TV star.

Throughout this book are random tips alongside the story, mostly about fashion. However, some of these asides remind you that he does have a degree in art history. He cites Mahogany, Paris is Burning and The Umbrellas of Cherbourg alongside Sixteen Candles and Clueless in list of important movies for fashion. His list of important artists include: Michelangelo, Rothko, Mapplethorpe, Kara Walker and Nikki S. Lee. I point this out as an example of the major tension of this book: despite a number of dropped names, there is knowledgeable and relatable person at the core of this book. Sure, the choice between staying at Vogue or appearing on The Rachel Zoe Project may not seem serious at first, but the book rightfully presents it as a major career decision: does Brad want continue working behind the camera or in front of it?

Recalling the first season of Rachel’s show, Brad mentions that:

[…] young gay kids across the country were reaching out to me, telling me how I’d given them hope. I’d given them the courage to come out, or to pursue their fashion dreams, or even wear a shrunken blazer to school. Reality TV was magnifying glass, I was finding out, by being myself, I’d given others the courage to the same.

When the show aired in 2008, GLBTQ representation on TV, via characters or real people, was sparse, if it existed for communities at all. Brad has a very clear goal of reaching out to younger fans through this book, especially the flamboyant and fashionable feeling stuck in small towns. By being considerably open about aspects of his life, he attempts give them some hope, advice, and a reminder to never ride the elevator with Anna Wintour.

Brad played the sidekick role on Zoe’s show, but his own show saw him as a lead and the boss. Born to Be Brad further cements that Brad has his own story to tell. While this is part of a larger promotional push, it also was part of a larger shift in society-at-large accepting the idea of the gay lead and gay protagonist. While this control over one’s own story existed in literature much earlier in history — there’s more room to be, and be complicated, in a book — this idea was novel in TV and movies only just a few years ago.

What interests me more is how Brad (and Mickey) chooses to talk about his life. Some aspects of Brad’s life are unsurprising, even typical, to some within the gay community (his early party days, Gay-December dating, etc.). Yet the book’s mostly straight audience would have not encountered some concepts before (at least at the time) or only know them through sensationalized stories. Born to Be Brad doesn’t explain these aspects, skipping Gay 101, and just tells the story of his life. For someone whose life is something of a product–see: this book, his TV show–, this book easily could have been heavily sanitized for general audience. Instead, he’s surprisingly candid for a celebrity. in the age of publicist generated hagiographies.

Brad Goreski may not be a huge celebrity or a major force in the overall histories of LGBTQ communities; he may only be referenced on a list of notable LGBTQ reality TV stars. In Born to Be Brad, he doesn’t ask you think of him anything more than celebrity stylist, a job at the intersection of two worlds not always known for their depth. Once readers are on the same page as Brad, readers can expect a fun read. They may even end up pleasantly surprised, like I was, that there is more to this reality TV star than they previously thought.

'Learning What Love Means' by Mathieu Lindon
'Motherland: A Memoir of Love, Loathing, and Longing' by Elissa Altman
'Fire in the Belly: The Life and Times of David Wojnarowicz' by Cynthia Carr