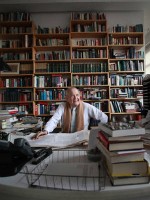 This Tuesday, The New York Review of Books celebrated its 50th anniversary at Town Hall with appearances from longtime, as well as recent, contributors Daniel Mendelsohn, Joan Didion, Darrly Pinckney, and Michael Chabon. While The Review has been criticized in some literary circles for publishing “unsurprising” political articles, many of the readings that took place Tuesday “struck deeply personal notes,” including Chabon’s recounting of writing his first novel and Pinckney’s description of his relationship to the work of James Baldwin. [The New York Times]

The Huffington Post interviews transgender activist Jen Richards, creator of We Happy Trans, about her most recent project the Trans 100—a forthcoming list of 100 trans activists working in the United States “to improve the conditions of the community and the lives of those in it.”

The media is failing in its coverage of trans issues. That isn’t going to change until trans people are included at the table, are in conversation with journalists and writers, are themselves writing, collaborating, producing, and directing. But none of that can happen unless we are visible, unless we can be found. With the Trans 100, no media outlet, no university, no conference, no LGBT organization, can ever again claim that don’t know where to look.

Committed: The “Batman on Robin” Exhibition (For Mature Readers Only)

This very evening at 7 p.m. Mission: Comics & Art in San Francisco will be opening the “Batman on Robin” exhibition—a series of original artwork from 30 artists exploring the relationship between none other than Batman and Robin themselves. Comic Book Resources sat down with the curators, Justin Hall and Rick Worley, to discuss their inspiration and the artwork included in the show.

The idea was to get as diverse a group of artists as possible to see what they would bring to it, as you can probably see from the samples (below). We have female contributors, heterosexual contributors, even a lesbian Batwoman and Catwoman story. We have paintings, digital art, and some traditional comics-style pen and ink.

Read more and get a sneak peak of the artwork here. [CBR]