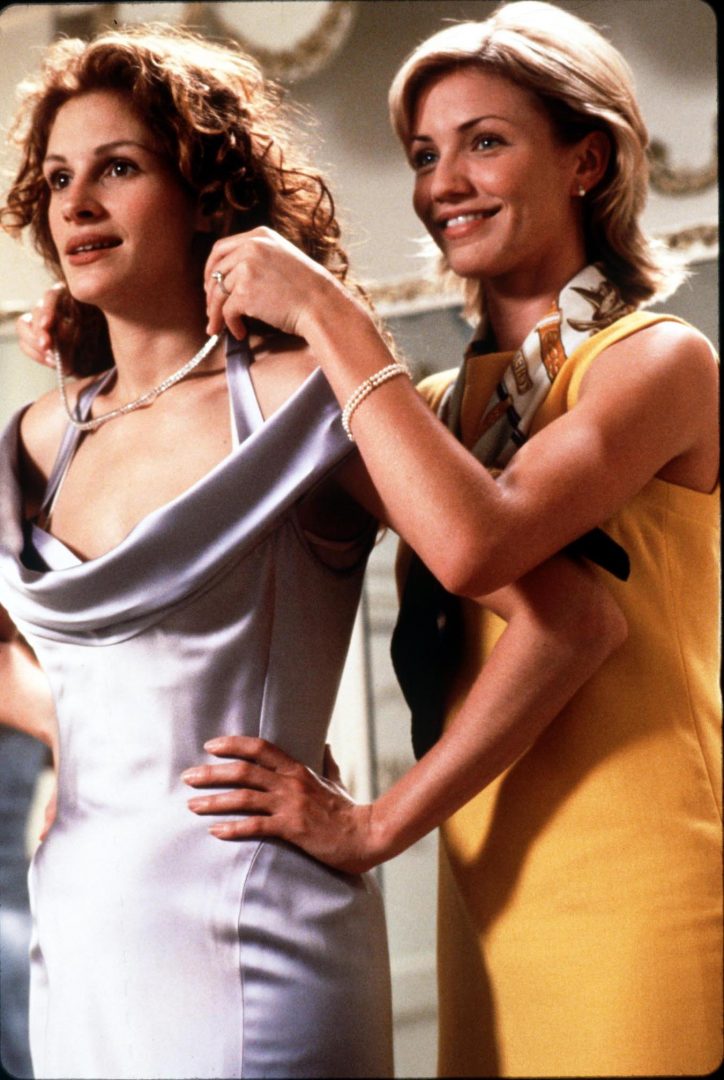 When Nobody’s Chasing You: The Romantic Comedy That Got Real

When Nobody’s Chasing You: The Romantic Comedy That Got Real 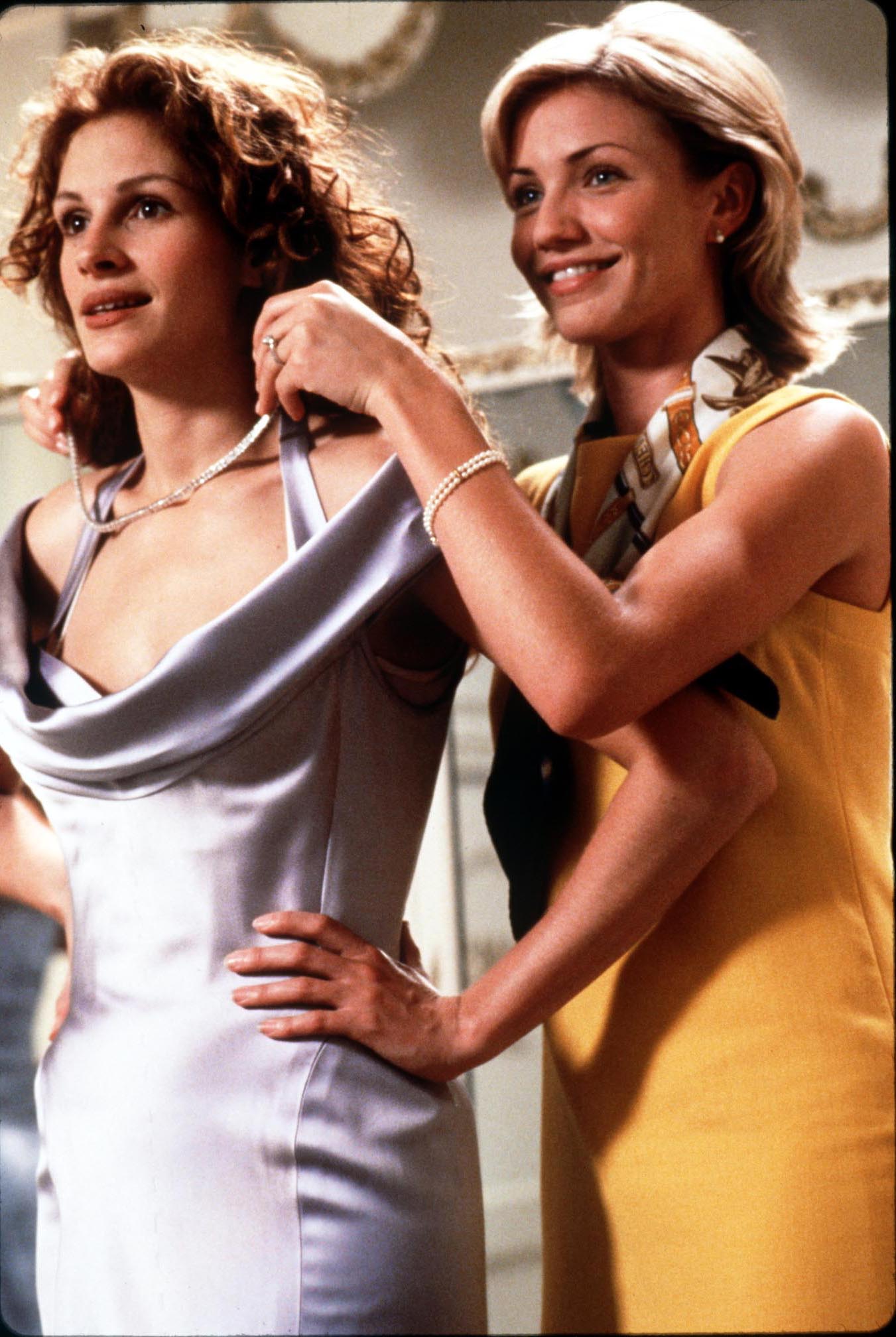 The first time I saw My Best Friend’s Wedding I was dismayed. At eight or nine, I had discovered the 1997 film among my maternal grandparents’ small, seemingly random VHS collection and then settled down for the evening to watch Julia Roberts scheme her way back into old flame Dermot Mulroney’s roguishly handsome heart. What could be better? It’s the romantic comedy that got real.

I was not, at that tender age, prepared for a romantic comedy to defy expectation. I never imagined that despite Roberts’ best efforts to derail Mulroney’s impending marriage to Cameron Diaz, frantically chain-smoking all the while, (SPOILER ALERT) she would fail. After successfully driving a wedge between the betrothed, Roberts’ character (the very archetype of the independent ‘90s careerwoman) is forced to recognize that after keeping her best friend and one-time ex on the shelf for nine years, he’s fallen in love with someone else and she’s finally lost her chance.

In true romantic comedy form, she comes to her senses just in time to be redeemed and forgiven; still, the film doesn’t give its heroine a happy ending. Yes, her dear gay (and incredibly patient) friend Rupert Everett shows up to the wedding reception to keep her company and lift her spirits, emphasizing the importance of intimacy provided by platonic friendships, but Roberts remains alone. Whether or not her character has learned anything, or changed in a profound way, remains unclear. The one straight man she has ever allowed to be close to her marries someone else. She manages—just barely—to do the right thing, but it’s not easy. It’s painful.

And if, like me, you can’t help but over-identify with conniving and/or big-haired women, it’s painful to watch—hence my childhood distress. But as time went on (and I came to embrace the masochistic pleasure of certain movies) My Best Friend’s Wedding eventually earned a spot in my own small, seemingly random collection of DVDs.

Time also allowed me to appreciate something that was not apparent to my eight-year-old self: just what a gay film it is.

There is, of course, the dashing Rupert Everett, playing one of the better gay roles he was confined to after coming out. As Roberts’ friend and editor (she’s a food writer), he displays plenty of charm, wit and, thankfully, reason. In one of my favorite and climactic scenes, Roberts calls from a van she’s stolen to tell Everett that she’s finally professed her love:

Everett: Was there anything on the other side of that kiss which leads you to believe this chase will end happily?

Roberts: That’s besides the point! We were interrupted—

Everett: Who interrupted you?

Roberts: Kimmie! She ruined everything. And Michael started chasing her before he could answer me.

Everett: Michael’s chasing Kimmie. You’re chasing Michael. Who’s chasing you? Nobody! Get it?

Their relationship has a lot in common with another fictional gay man/straight woman duo of the 1990s, but, fortunately, lacks the discomfiting symbiosis of Will and Grace. (Everett’s character’s intelligence and maturity also elevates him beyond the comedic caricature of the wisecracking gay friend.)

This rather obvious plot point aside, the movie has camp sensibility all over it. Its soundtrack, composed primarily of Burt Bacharach/Hal David songs, lends itself to some spectacularly over-the-top musical performances within the film, including Cameron Diaz’s off-key karaoke performance of “I Just Don’t Know What to Do with Myself” (the fun starts around 1:20) and Rupert Everett’s (and company’s) impromptu sing-along rendition of “I Say a Little Prayer”. Ani DiFranco’s cover of “Wishin’ and Hopin’” plays over the opening sequence featuring a choreographed bride-and-bridesmaids routine.

Truly, I think the queerest thing about the movie is that its narrative resists the rules of the romantic comedy. There’s plenty of romance and plenty of comedy, sure, but the takeaway, as I pointed to earlier, is quite a departure. Thinking about the film for this piece I was reminded of Larry Kramer’s seminal 1978 novel Faggots, in which protagonist Fred Lemish is a screenwriter. The worlds of My Best Friend’s Wedding and Faggots couldn’t be more different, but in each, Julia Roberts and Fred Lemish are facing parallel realities: professional success but no prospects for long-term romantic companionship. Moreover, Lemish’s personal frustrations are magnified by his work: he’s tired of writing the same tidy heterosexual love story over and over again. While his producer urges him to “[write] the story of a doctor and his young wife,” Lemish instead dreams of writing:

The Quest for Love. A thirty-eight-year-old faggot decides he must find a lover before he’s thirty-nine. He’s lonely—and isn’t this the human condition, so timely, so touching?, we must remember that all great stories reflect the human condition—and he wants a mate. This is the story of his Quest. The inborn, natural, lusting Quest of Man for His Mate.

My Best Friend’s Wedding might not be the movie Fred Lemish dreamed of writing, but it feels a whole lot closer than another “story of a doctor and his young wife.” And, like Julia Roberts, Fred Lemish doesn’t succeed in getting his beloved Dinky to commit. While he, too, comes to accept this reality, on the penultimate page he must observe that “…yes it still hurts…”

Bella Books is Seeking Full-Length Manuscripts from BIPOC Writers
Blacklight: James’ 'A Kind of Justice' Depicts the Struggle of a Shrewd Transwoman Accused of a Vici...
The Muscle and the Melodrama: A Memoir of Comic Books