‘Earth 2’: Gay Green Lantern Shines the Light on a Literature Still Wet Behind the Ears and Maybe Even Green about the Gills

‘Earth 2’: Gay Green Lantern Shines the Light on a Literature Still Wet Behind the Ears and Maybe Even Green about the Gills

For some time now there’s been a schism—both spoken and unspoken—between queers who want same-sex marriage rights and queers who are dedicated to preserving some vestiges of a radical and non-normative past. The schism is one filled with issues of class biases and capital—“Marriage equality has made our city more open, inclusive and free—and it has also helped to create jobs and support our economy,” New York City’s Mayor Bloomberg recently said—and it is a conflict that will have to play itself out in all the arts. Indeed, any literature that cares to address the queer desire to marry among gay men and women will have a lot on its shoulders, maybe even more than literature about AIDS ever did. I might even go so far as to say that while literature about AIDS is generally considered dead, dated, period, literature about the gay and lesbian desire to marry will presumably persist over time.  So it’s with sadness and a kind of I-told-you-so glee that, at this early stage of the game, I must report that Earth 2 (DC Comics) , the comic-book home of the much-heralded gay Green Lantern, doesn’t bode well for the gay-marriage side of things, presenting us as it does with juvenile doses of military boosterism, religiosity, and perhaps worst of all, sentimentality.

Earth 2 is set in a parallel universe in which the world’s “trinity” of superheroes—Superman, Batman, and Wonder Woman—are not only ready and willing to sacrifice themselves to save the world from alien invaders, but in fact do so. The invaders are from a dimension that goes unnamed. Given current blockbuster-cinema standards, I guess that alien invaders might not be all that ridiculous sounding. Or wouldn’t be, if it weren’t also for Earth 2’s fictional fact that the invaders are evil “parademons” and that, at least until the trinity sacrifices itself, the evil parademons are locked in a “stalemate” with the good trinity. We are furthered hammered by Earth 2’s simplistic, overwrought 9/11 narrative analogy by the presence of the “Soldiers of the World United,” a military body that backs up the “trinity.”

Enter Alan Scott, a handsome (if hunkier) Anderson Cooper type who anchors spots in which he laments the fallen trinity and the fallen Soldiers of the World United as “heroes all”—“We shall never forget them.” Alan has a lover named Sam, also super-hunky, who dies in a train derail, an accident that Alan manages to survive. On the train, just before the derailment, Alan proposes to Sam, presenting him with a gold wedding ring. In the aftermath, awakening as a bachelor again, Alan is very luckily rejuvenated and imbued with superpowers by a sort of green burning bush. The bush turns out to be Mother Nature herself, protecting herself and her own by supplying the trinity-deprived universe with new a superhero—The Green Lantern. Now, very importantly, the burning bush instructs Alan to identify a conduit for his new powers and so—predictably, sentimentally—Alan chooses his wedding ring, thereby swearing to protect humankind in honor of his dead fiancé. Oy! 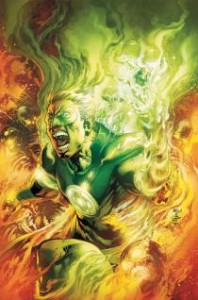 But wait. It gets worse. Much worse. Because, you see, the events I’ve narrated above largely happen in Earth 2 numbers one and two. At the end of Earth 2 number 3, we meet Grundy, a villain destined to do battle with Alan/The Green Lantern. And unlike Alan, who seems to be the embodiment of prosperity, Grundy wears an outfit that looks something like a working-class butcher’s gown—a swath of black leather—which he’s accessorized with a leather harness and leather armbands. What is this? The new gay versus the old? The marrying kind versus the randier working class? What it is, of course, is convoluted, a jumble of 9/11 tropes mixed with the gay 70s, gay marriage in the 21st century and, when you throw in the green burning bush, millennial environmentalism.

The last time I went out to buy a comic book was in 1992, the year Northstar, a character in a Canadian superhero collective called Alpha Flight, came out. AIDS was the social issue du jour back then, so not surprisingly, Alpha Flight number 106 comes with a good dose of sentimentality, too. Yet Alpha Flight was somehow a lot more fun, if a lot more badly drawn, than Earth 2. I have to summarize a narrative again to show you what I mean: While doing his duty protecting Toronto, Northstar finds an abandoned baby-girl who turns out to have AIDS. The baby becomes a cause célèbre, which only serves to enrage an already angry superhero named Maple Leaf. Maple Leaf is a hairy bear of a man who hangs out around his apartment shirtless and in hot shorts. Maple Leaf, it turns out, is the sexy recluse he is because he’s grieving his only son, a man who died of AIDS. Moved to villainy by TV coverage of Northstar’s baby darling, the older Maple Leaf seeks out the younger Northstar and their battle scene dialogue is filled with classic AIDS-era agitprop. “My son Michael was a victim of AIDS as well!” Maple Leaf socks it to Northstar. “But he was gay—so people didn’t afford him the luxury of being ‘innocent.’ There were no press conferences, no fundraisers. No nightly news updates.”

“Do not presume to lecture me on the hardships homosexuals must bear,” Northstar socks it back to Maple Leaf. “For while I am not inclined to discuss my sexuality with people for whom it is none of their business—I am gay!” Maple Leaf then calls Northstar selfish and reminds him that as a member of Alpha Flight and a former Olympic athlete, he has a duty to be open about his sexuality.

In the end, Northstar comes out, the baby with AIDS dies, and Maple Leaf and Northstar are united in their grief.

Sentimental? Yes. But at least we get some anger, some catharsis, some reminder that not all of us are enfranchised. Indeed entitlement and class are two of the challenges writing about gay marriage will have to take on. Because if art about gay marriage ends up being all about gay men who can afford to take high-speed trains to romantic weekend getaways and exchange gold wedding rings, as Alan and Sam do in Earth 2, then it’ll leave out as much as a press conference that sentimentalizes a baby with AIDS. Granted, and as I’ve already alluded to, some comic books are pure escapism. We all need escapism. Escapism has its merits. But it helps when it doesn’t take itself as seriously as Earth 2, which takes itself very seriously.

Indeed, the best literature about AIDS and death and dying took death for granted. The advantage of reaching that kind of maturity is of course that you become free to have a sense of humor again. The best literature about gay and lesbian marriage will, I suppose, have to do the same. What else it will and won’t have to do, I don’t know—I suppose it will have to be both another dimension and a parallel universe.

Correction:  The original post incorrectly stated that Alan’s lover, Sam, was white. He was actually Asian.

Navigating Sex Parties and Pride: A Week in the Life of Cartoonist Jeremy Sorese
Lambda’s Writers Retreat for Emerging LGBT Voices: The 2013 Fellows Reflect
Shawn C. Nabors: To Love and Be Loved